Harlan is practicing his smiling. He’s not doing it in response to anything yet, but he’ll crack a grin sporadically. It’s not quite balancing out the screaming/crying that seems equally unrelated to anything that’s actually occurring, but it is awful cute. It’s good timing since he’s been a bit difficult the past couple days. It’s frustrating when there’s no identifiable reason for the crying. We also abandoned our attempts to get him to sleep in the crib the past couple days and just let him sleep in the bouncer seat. We think he might like being propped up slightly rather than lying flat. Whatever the reason, we gave in to exhaustion. Here’s hoping for more smiles and sleep in 2012!

300 pictures for a holiday card

Thanks goes to whomever had the idea to make the necessary hardware for digital photography.  Long gone are the days when 24 exposures is all you had and you had to hoard them for that ‘just in case’ moment.  Now days we can take picture after picture with very little thought given to the ramifications of taking that picture as we can now store hundreds of photos on a little chip the size of my fingertip.

Being that Harlan was shiny and new, we knew lots of people would want to see a picture of him.  Thanks to Snapfish we were able to not only make the cards very quickly but also have them printed on quality paper and shipped to us with time to spare before Christmas.  We turned around sixty cards in twenty-four hours, filling our mailbox to the brim, and probably giving our mailman, Henry, a heart attack when he opened the door on the mailbox to retrieve of which the little red flag had given warning.

Back to the digital photography for a moment.  How many pictures do you think it would take to get a good shot of our new son?  He’s two weeks old, he can’t be moving around that much, right?  He’ll just sit there and look cute and we can get the shot and be done with the madness.  Nearly 300 pictures later (292 to be exact) and none of them show him with his eyes open.  None.  What you see on the left is the best we have.  Anyone that has been following us on Flickr knows he has eyes but you wouldn’t know it from the “official” photo.  Oh well, people will just have to guess.

And one more thought before I close.  Harlan has been with us for 21 days and has had roughly 436 pictures taken.  That’s just over 20 photos a day.  Being a math geek I’d like to extrapolate for a moment.  If this trend continues we’ll have 7578 photos per year, take that number times 18 years (until he’s accepted into the Naval Academy, MIT, or Stanford) and you get a whopping 136,405 pictures depicting his entire life.  That equates to 5,683 rolls of 35mm film or 191GiB hard drive space.  Glad I have some extra room on my computer…

A Hike and a Geocache 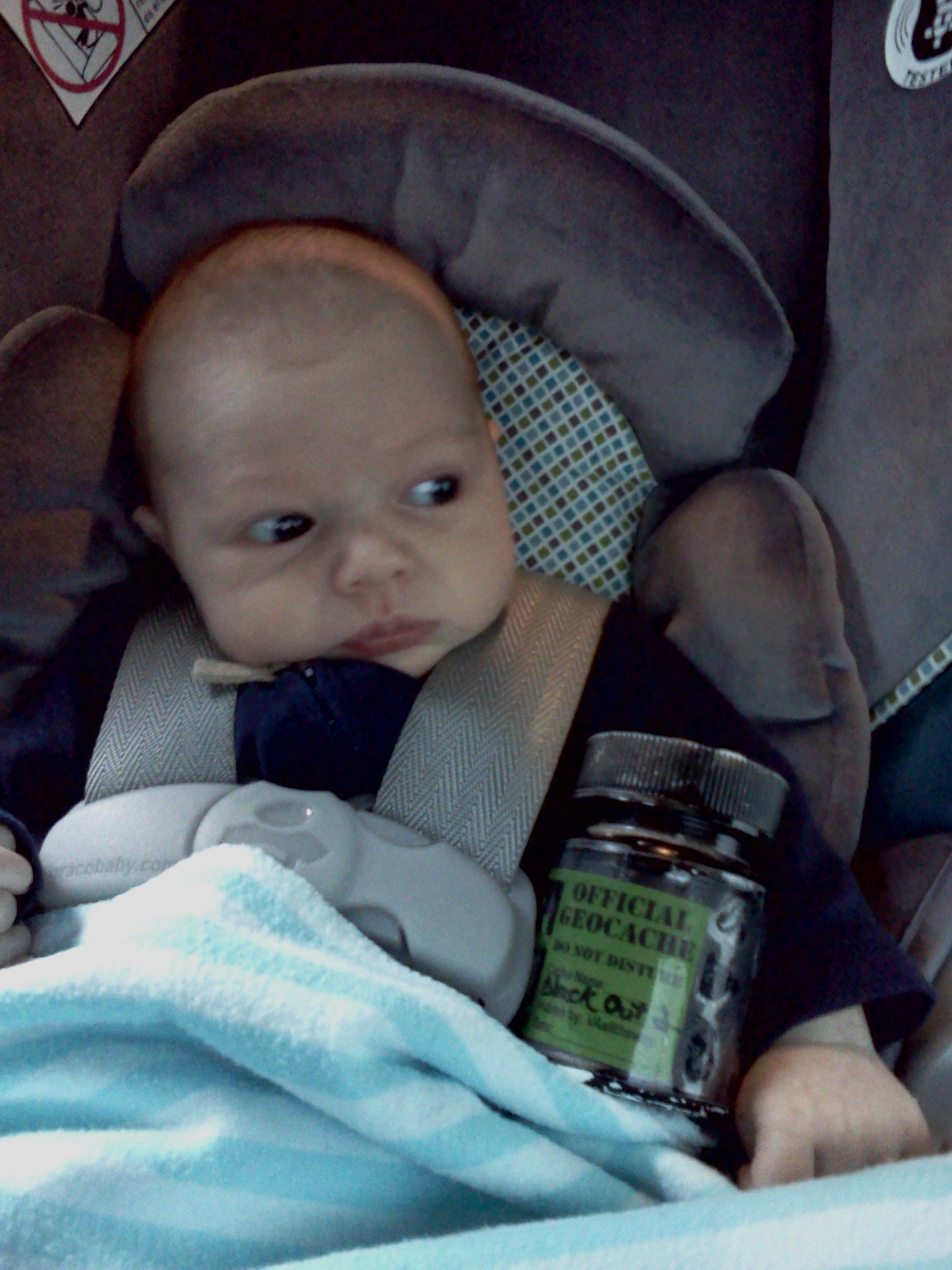 e’re apparently not wearing Harlan out enough during the day since he’s still waking up every two hours at night and being quite fussy about going back to sleep, but we’ve been trying. Saturday we took him for his first hike in the woods. It was a bit chilly out, but strapped into the carrier on Eric’s chest I don’t think he had any idea. In fact, Eric was sweating from the additional body heat. Harlan,as he did for his first walk around the neighborhood, slept through the entire excursion, including our narration about what there was to see. He did wake up on the way home, including the stop to “find” his first geocache though. Here he is posing with the cache.

Since Harlan’s days essentially consist of eating, sleeping, crying, and excreting things there’s not much opportunity for new achievements, but he scored one last night. During his 4 a.m. changing I forgot to cover him up between taking off the dirty diaper and putting on the clean one. If you’ve had a baby boy you know what happened next… He peed. It was neither the first time he’s peed during a changing nor the first time I’ve forgotten to drop a wash cloth over the top of him for protection. It was however the first time he’s gotten that kind of trajectory during a whiz. He shot that stream a good two feet from the changing table, landing a hit square on the portable space heater. It was impressive.

In non-bodily function related accomplishments, he’s getting the hang of tummy time. Today he managed to turn his head three times from one side to the other. It took a little frustration and some temporary face plants into the mat, but he got it.

Baby carrier tested and ready for a hike 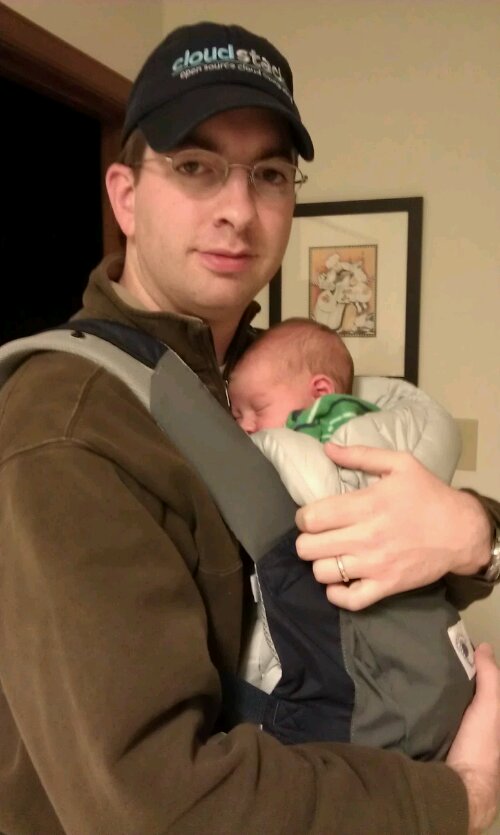 We bought a carrier for Harlan that would be good for hiking. Harlan seemed to enjoy being wrapped up and he seemed to be securely fastened to me.  I was a bit worried that he would slip down but the pack seems to hold him in pretty well.  He should be warm as well.  He sits in what I can best describe as a gray sleeping bag.  With him smashed against my chest he should be ready for the next snow storm even if he’s dressed in Bermuda shorts.

Like we did when we were testing out our hiking gear, we’ll get out on the neighborhood and see how well it works.  Next we’ll be shopping for his backpack so we won’t have to carry him on our next adventure up the Appalachian Trail. 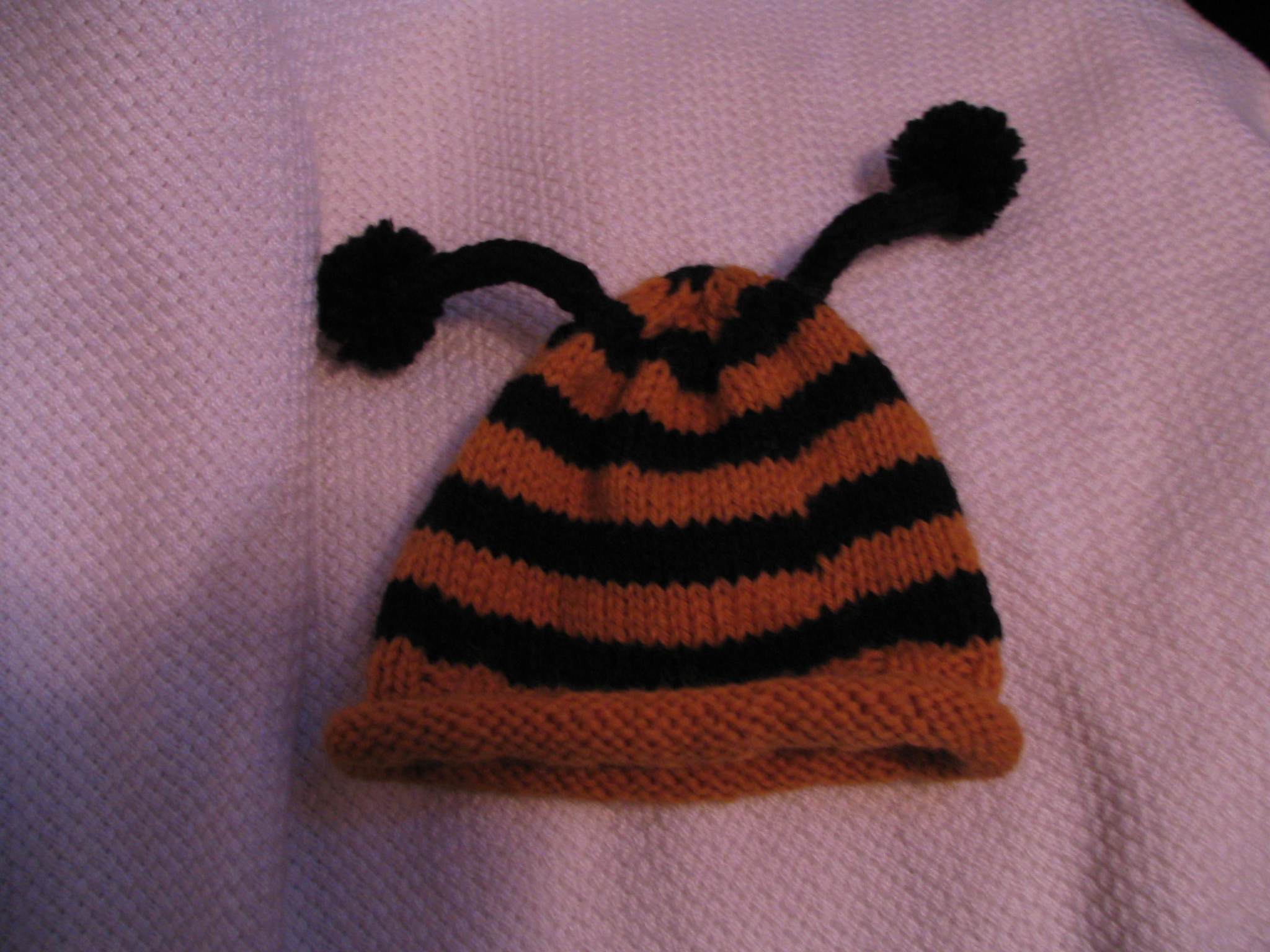 I don’t know how much Harlan likes hats but he has certainly obtained his fair share of the market.  Within five minutes of being born he was given a hat.  Apparently the pink and blue striped hat was just not to his liking so after his first bath he received a second hat this time an oatmeal-colored hat with a small blue bow at the top.  You’d think that he would have had enough at this point; he owned more hats than days he’d been alive!  Of course he managed to get another hat, similar to the second, the next day just before going home.

The boy has hats.  Many outfits we bought for him came with… you guessed it… a hat.  Large beanies is what they actually look like but some of them have some flair.  It’s just amazing to me at how many hats the boy needs.  Of course the best one of all is the one pictured here made by a friend who actually studied bees!

Harlan got his first real bath yesterday after his umbilical cord stump finally let go. He definitely seemed to prefer it to his previous sponge baths. We also switched to cloth diapers, which his digestive system seemed to take as a sign to let loose. I don’t know if we’ll still be laughing about it in a couple days, but by evening we couldn’t help but crack up at the sheer volume of output. Sleep deprivation perhaps? Speaking of sleep, Harlan has been fussy in the evening, but once we get him down he’s been pretty good about sleeping a couple hours between feedings. Last night he had trouble going back down when he woke up, but the previous night he sacked right out each time. We’re just taking it one bleary-eyed day at a time. In other good news, he is eating well (as one might guess from his output) and gaining weight. After dropping to 6 lbs, 10 oz on Monday, he had rebounded to 7 lbs, 2.6 oz when the lactation consultant weighed him again on Thursday. He is, of course, still as cute as ever.

Sleeping… In the Crib!

Last night (well, technically this morning) was an exciting one in the Christensen household. For several glorious uninterrupted hours everybody was asleep in their as

signed bed! Up until now Harlan has been refusing to sleep at night other than in someone’s arms. We’ve gotten him to knock out in the portable crib and the swing during the day for even up to a couple hours at a time, but he wanted nothing at all to do with the crib, turning it into nothing but a large, expensive, decorative fixture in the bedroom. Finally last night at 1:30 a.m. after christening the sheets twice he decided to go to sleep in there… for three hours!! I had to blink at the clock several times at 4:30 when he woke up crying; I couldn’t believe it. He went down again at 5:30 until 7:30 when I had to get him up so we could evacuate the bedroom for the contractor who is remodeling the master bathroom to arrive at 8.

Sorry, this post wasn’t shared earlier. I just saw that it was in draft. Unfortunately I don’t know what text we were going to write but I think the picture says enough.