Hands aren’t just for gnawing on?!

Harlan has long been a fan of sticking his hands in his mouth and sucking on them, but now he’s discovered hands can also hold things! He started 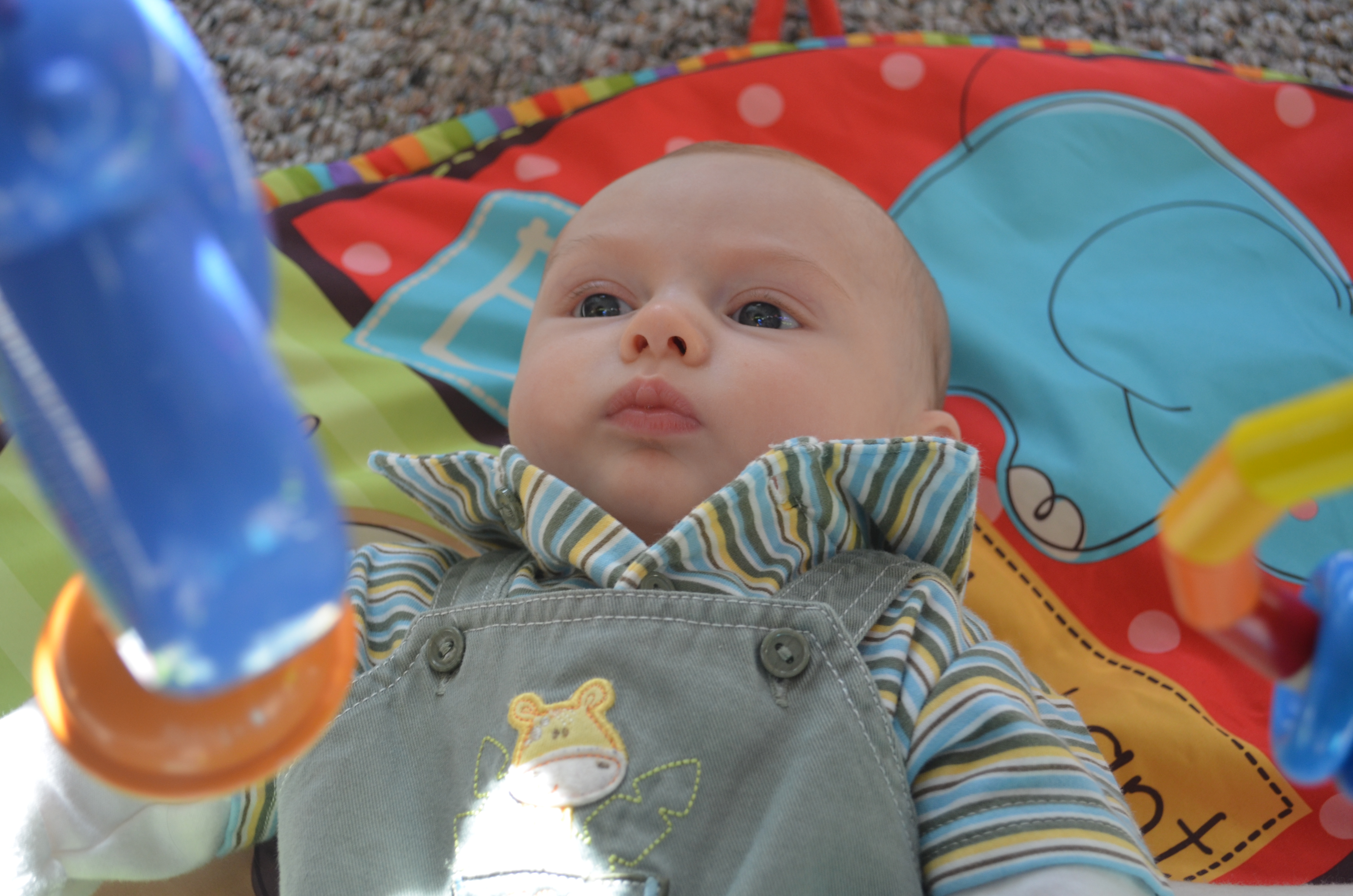 consistently batting at objects in front of him a few weeks ago and then holding and immediately dropping toys. Finally, last week at daycare he grabbed hold of a ring of toy keys and shook them. (Much to our excitement, the babysitter caught the accomplishment on video.) Since then he’ll grab and try to hang on to whatever is within reach that he can get his little fingers around. That and his improved hand-eye coordination has made the play mat finally fun (and good for self-entertainment!). Plus, we’re equally entertained by watching him learn new things!

This morning when I was holding him up he seemed to be eyeing his feet, so maybe that will be the next big discovery!

Last night it snowed.  Not a whole lot, but enough for Harlan to see the snow.  He wasn’t as excited about this whole frozen precipitation thing as his father though.  Unfortunately, it was getting dark, and we really didn’t get a chance to spend any time “playing” in it (not that there was enough to play in anyway).

Early this morning another snow shower came and with temperatures in the mid 20s (F) the snow stuck around and even stuck to the road.  So this morning, Harlan, still not sure of what was going on, donned his snow suit and went outside with us.  Again, not a lot of snow to play in and none of it falling, but at least he got to see it on the ground.  Only problem is it was cold!  The temperature in the mid-20s and a near-howling wind made it quite uncomfortable.  Nonetheless, Harlan was a trooper and posed for several pictures before returning inside.

We may need to put in a second phone line.  Last week I put Harlan on the phone when his Mom called to check up everything.  Harlan ‘talked’ on the phone for a good five minutes, just smiling and cooing away.  Saturday night he talked to his Grandma for a while.  I hope this isn’t a sign of things to come.

Stay off the phone, your mother is expecting a call!

Harlan is feeling better this morning as yesterday was quite trying for him.  It all started at the pediatrician’s office when Harlan was getting his immunizations. One of them was given orally.  Let’s just say that Harlan’s upper gastrointestinal system went into ’emergency reverse’ and the words one of my EMS instructors once told me rang true (“never stand in front of a drunk person you are treating”).  Luckily for the nurse I saw it coming and was able to redirect the flow.  Harlan was otherwise un-phased by the incident and immediately looked at me and gave me the sign for “I’m hungry”.

After a bath, Harlan and I slept for most of the afternoon on the couch.  He awoke and ate a little, which turned out to be a bad idea later on with another test of his upper gastrointestinal system, and generally slept for the rest of the evening.  He awoke several times over the night but generally went back to sleep almost immediately.  This morning he seems to be feeling better and is ready to take on the day.

He continues to grow, though.  He’s up to nine pounds, ten ounces, and twenty-three inches long.  He’s been working on his hand-eye coordination, as well, by whacking everything in sight.  He’s right on schedule!

Harlan started daycare on Monday. We found a wonderful woman who just started watching kids out of her home a couple minutes from where we live. If Harlan was any older we’d have him walk over. As of now she also watches a four-month-old and a two-year-old, both of whom are adorable. So far it seems to have gone well. He’s been eating better out of the bottle with her than he had for the past two weeks at home. I’d like to think we got him broken in on it and he just finally realized that was the only way he was going to get fed during the day, but I think also she probably just knows what she’s doing! We’ll see how he does Friday home with Eric.

She also agreed to continue cloth diapering him, which is wonderful. They are bulky, but we’re really liking them, and at the rate he tears through diapers it has to be more economical! There’s a learning curve, but after a leak on Monday she’s gotten the hang of it. (Harlan is quite the fan of wardrobe changes!)

The photo is him on his first day with his first homework assignment. I know- homework at two months old! Admittedly, Mommy helped him out quite a bit (ok, I did the whole thing, but he watched!). I told him this was the only school project I was going to do for him though; he was on his own from now on. His assignment was to show his family (within, unfortunately, the limitations of the size of the piece of paper and the people we had photos of!).

Eric and I both miss him during the day, but I’m looking forward to lots of snuggle time this weekend.