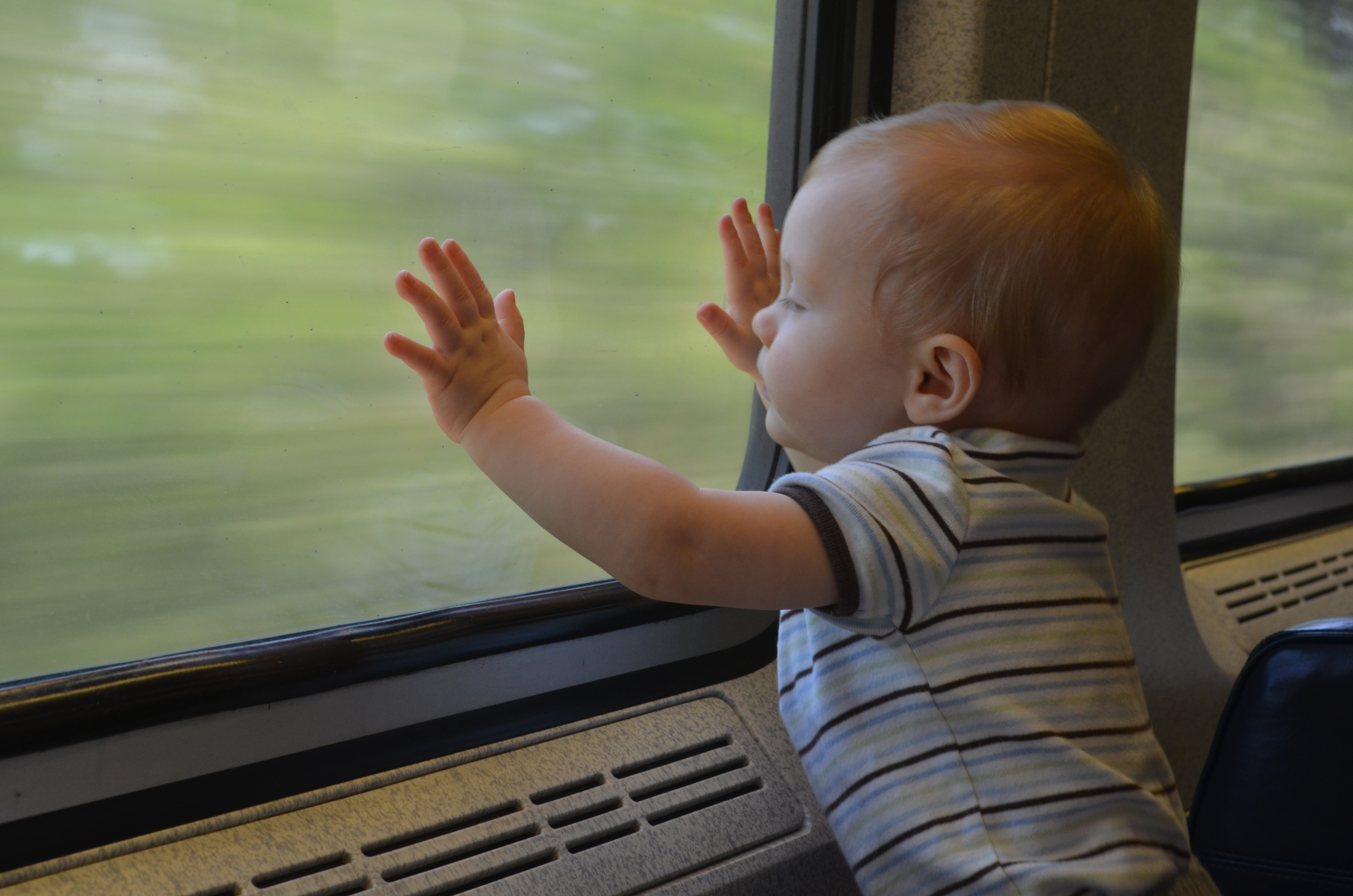 We took our first family train ride last week. It was a full day of travel from Newport News to Cleveland, Ohio and then back, but we had a fantastic time. The conductor allowed us to sit in the disabled seating on the way between Newport News and Washington, D.C., allowing us ample floor space to sit and roll a ball and the train rumbled along the tracks to our destination. Harlan also enjoyed walking (still with assistance) up and down the aisle, peering curiously into each row of seats as he went by to find friendly faces. He’s a little guy who has never met a stranger. After he flirted his way through coach, we headed to the lounge car where he proceeded to make more new friends. He was surprisingly entertained by looking out the window at th 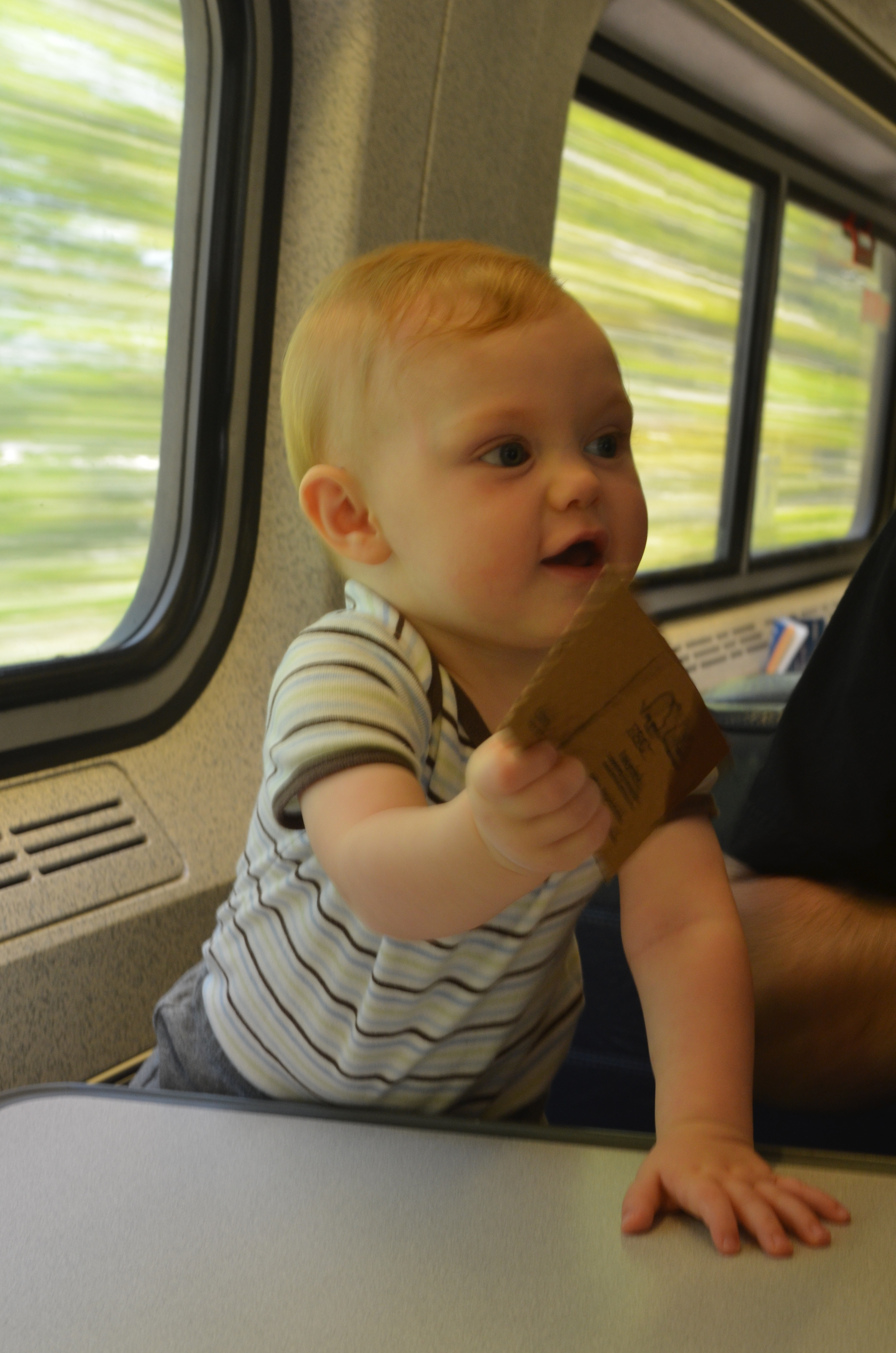 e scenery going by and spent quite awhile with his hands pressed against the glass, taking it all in.

Between D.C. and Cleveland we got a roomette in the sleeper car. It was cozy, but we all snuggled in and had a good night. The room had two bunk beds- an upper bunk that folded down from the ceiling and a lower bunk that was made by pushing the two chairs together. Neither bunk was very wide, but there was enough space on the bottom to put Harlan near the wall and have one of us sleep on our side along the open side of the bunk. We all had a pretty good night… at least until 3 a.m. when the train got in to Cleveland!

All in all, the trip was a wonderful family experience, and we’re looking forward to our next journey by rail. It’s so much more relaxing than all the screaming to get out of the car seat and frequent stops for diaper changes and feeding. 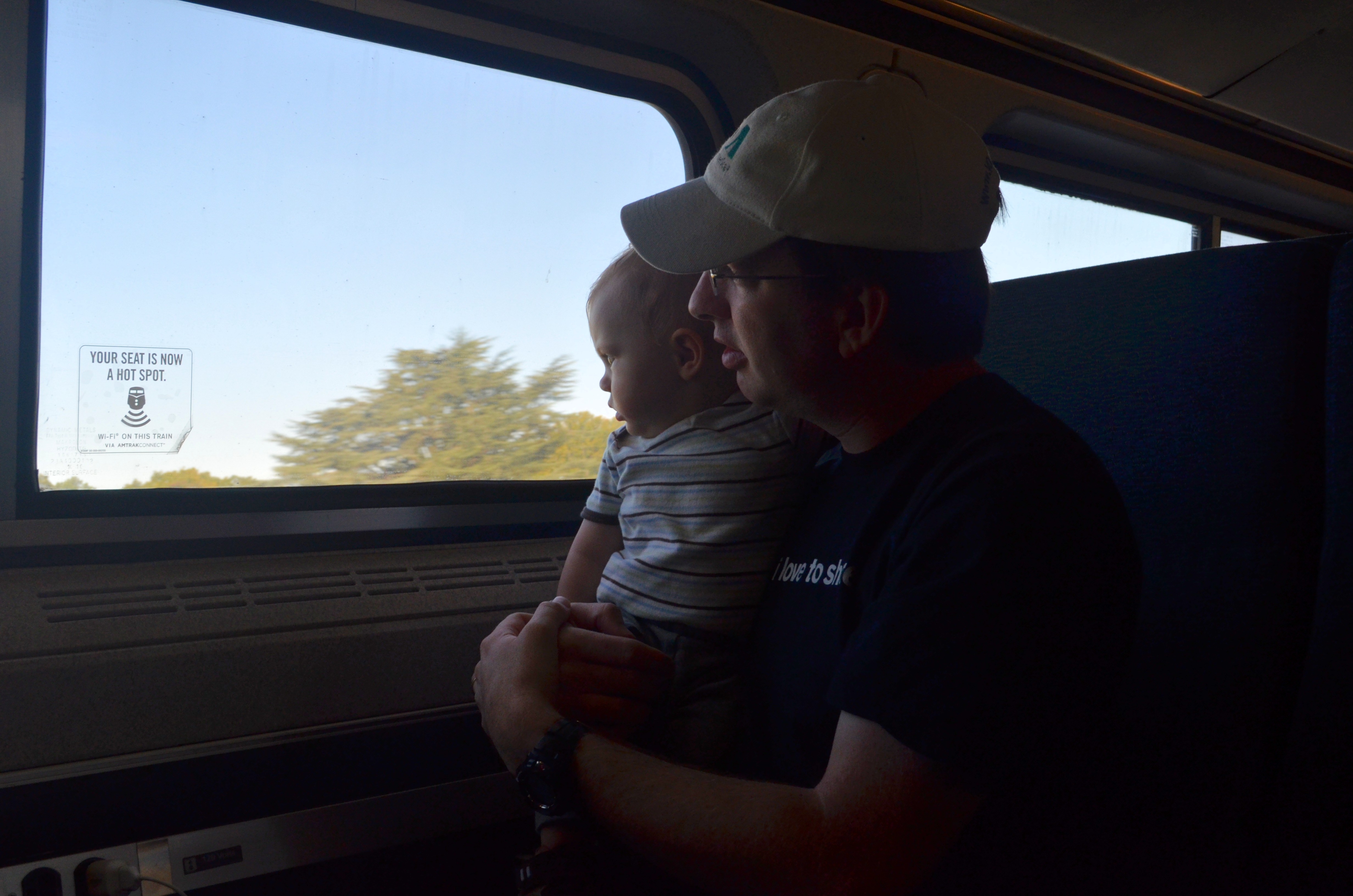 More accurately: Tooth! Harlan’s first tooth has broken the surface. The other one is visible through the gum but hasn’t joined its partner yet. The first one just broke through in the past couple days. Harlan has been poking at it curiously as if he’s thinking, “What an interesting development- something sharp just appeared in my mouth!” In the last couple weeks he’s also gotten the hang of feeding himself by hand, so it’s a perfect time for the introduction of teeth. He’s had an excellent pincer grip for months and has been feeding himself rice puffs for awhile. Other foods such as chunks of banana and peaches he would pick up like a pro… and then either squish them in his fist or drop on the floor. After a few demonstrations from Eric and I- “Look at Mommy pick up the peach and put it in her mouth. Chomp Chomp. Yummy!”- he figured it out. It’s great to all be able to sit at the table and eat together now. Although at least one of us does seem to end up with something in our hair…

Harlan is doing his best to work up an appetite too. The kid is basically unstoppable. He thinks he can climb over, off of, under, or between pretty much anything. The other day he scrambled up me while I was leaned back in the recliner and I caught him by an ankle has he just about went over the top of the chair. Eric has caught him a couple times diving off the bed too. Unless he’s sound asleep he’s in motion. And I do mean sound asleep- He’ll crawl in his crib with his eyes closed and even pull himself up to stand. Getting him to lay down and go to sleep while still awake is next to impossible. Often I think I’ll have him down and will look over and he’ll be standing his crib, hanging on to the rail and swaying with his eyes closed, almost asleep, but determined not to give in. During the day, he follows us from room to room and will seek us out if he looks up and realizes he’s alone. He moves fast on all fours and even faster when he walks pushing his wagon. We’re going to get ruts in the carpet from where he goes back and forth between the living room and the dining room wheeling that wagon. The only problem is he can’t turn it since it has fixed wheels, so he charges ahead until he rams into the wall and then hollers until someone comes and spins him and the wagon around so he can tear off back in the direction he just came from. And repeat.

All that movement is really burning through some calories too apparently. Last week Tuesday we took him to the pediatrician after a bad reaction to a mosquito bite nearly swelled his eye shut. He weighed 17 pounds, 1 ounce. A week later at his nine month checkup this Tuesday he weighed 16 pounds, 13 ounces. Friday the cardiologist weighed him in at 16 pounds, 8 ounces. The pediatrician said that puts him in the 3rd to 9th percentile for weight. He’s still running in the 25th percentile for height at 27 1/4 inches. He has yet to taste a food he isn’t willing to gobble down, so we’ll just keep feeding him, and maybe add in an extra helping of pureed sweet potatoes for ourselves so we have the energy to keep chasing him!