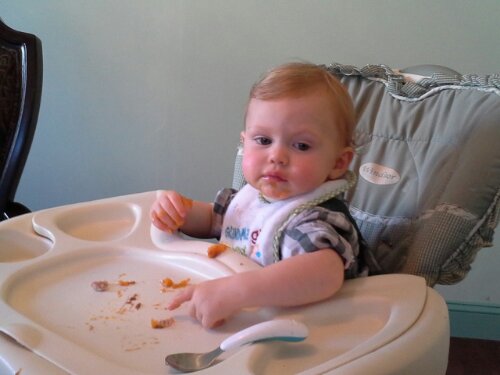 Harlan just missed last Thanksgiving due to a scheduling conflict, so this year was his first chance to enjoy turkey and fellowship. Our wonderful friends Naciem and Lisa invited us over. They put on quite a spread and Harlan did his part to shovel in as much food as his could (quite a bit all at one time). He enjoyed turkey, sweet potato mash, squash and apple casserole, rice, and green bean casserole. He even helped out his dad with some pie! And in traditional fashion he is now down for a post-meal nap.

Having fun in Maryland 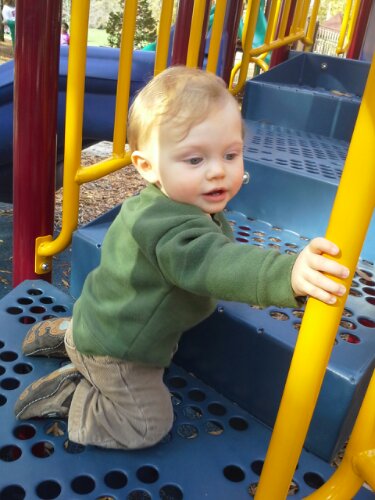 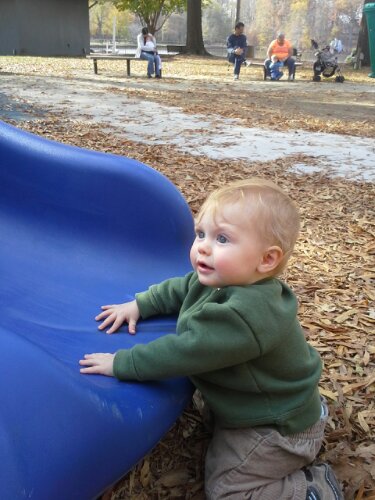 It has been a busy time for our family with our recent move and settling into our new home. Harlan has been taking it all in stride though and especially has been enjoying playing with his new friends in Maryland. Yesterday we went to the park and he had a blast climbing and sliding and swinging (and eating bread scraps intended for the geese in the pond). Although he has no trouble standing unsupported, he isn’t showing much motivation to walk that way. He insists on holding on and cruising, only moving to other objects within reach. For distance movement he hits his hands and knees and crawls. Although effective it makes for dirty hands and knees.

He is taking his time verbalizing beyond babble too but enjoys being read to and pointing at the pictures, which Eric and I dutifully identify. We’ve been visiting the library and his grandparents have bought him a number of books so we aren’t being driven crazy by any one favorite yet.

That isn’t to say he’s not driving us crazy at all. He is vastly amused by buttons at the moment, very purposefully and studiously pressing them on his toys and seeing what happens. A snippet from “My Bonnie Lies Over the Ocean” is a recurring evening soundtrack.

Overall he is a joy. On Friday both Eric and I went to pick him up from daycare a little early. Eric peeked around the corner of the room he was in and he looked up and said “DaDa?” Then I stepped in and he said “MaMa!” The highlight of my week.