I was taking a look at my past finds statistics and found that most of my finds occur in May.  I guess the trend starts mid-April but May is really when the numbers start flowing in.  I guess this is because the weather is turning warmer and I’m ready to get outside.  This May wasn’t any different.  I’ve spent the past few months staring out the window waiting for temperatures to increase enough to not have to wear four layers of clothing just to be comfortable.  I’m also coming off of a fairly long hiatus from Geocaching meaning that my caching-sense isn’t what it used to be.

To combat the winter cabin fever and to help get my caching numbers up where they should be I’ve established a few goals for May:

I’d also like to increase my annual cache count.  I’ve never found, on average, one cache per day per year.  Back in 2007 I got close by finding 280 caches that year (0.7671 caches per day).  Really this shouldn’t be difficult and maybe I’ll get lucky and double that!

So I’m four days into the month and it’s the first weekend, how am I doing?  Well, I’ve found a cache every day of this month (actually since 30 April) and I’ve added thirteen new caches to my list of finds.  I’ve even found a cache series that I’m really interested in: the Cold War Caches.  I attempted three of these today but only came up with two of the finds.

So we’ll see how things go through the month and hopefully I’ll meet my goals.  It should be fun trying anyway!

It was time.  Harlan’s hair was getting in his eyes when the wind blew and during swim class after getting dunked in the water. I had a tough time losing his little baby curls and more importantly admitting it was time for another growing up milestone, but we took him for a haircut. He happily sat on Eric’s lap and ate goldfish crackers while the stylist did her work, and I don’t think he even noticed what was going on. He’s even more handsome now as a big boy. 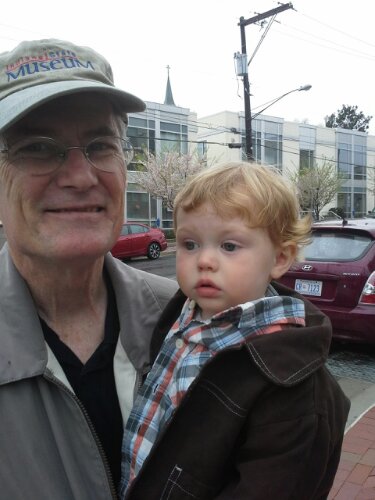 (Backdated post. Just realized when I posted the other one from my phone that this one had only gotten saved, not posted. Oops.)

Perhaps it’s being around the older kids at daycare, but at 17 months (today!) Harlan acts like he’s ready to take on the world and then tell you all about it. He surprises me at least once a day with a new word that he’s learned and has been talking in simple sentences for several weeks. His first sentence? A basic, clear declarative- “I poop.” And indeed he did. His longest sentences are “I see [insert object here].” Breakfast on Sunday morning was delayed because it was much more interesting to stand in the cockpit and announce “I see boat!” at the regular stream of fishing vessels and pleasure craft headed out into the bay. He would then wave and say “hi” and as the boat passed us (frequently eliciting waves back from the occupants) and then say “bye” and wave until the boat headed to the jetty. And then repeat. He also has an odd obsession with shoes and hats and cannot spot our row of shoes without picking through them and identifying “Daddy’s shoes” and “Mommy’s shoes.” I recently hung them all out of reach, eliminating another favorite pastime of methodically relocating each of the shoes, one at a time, from spot to spot. He is also expressing preferences (both good and bad) like whether he wants to wear his brown shoes or his blue shoes and eat banana or oatmeal for breakfast.

He also continues to be quite confident (and/or perhaps blissfully unaware of danger). He isn’t clingy in group settings and after a couple minutes to get acclimated will run off in the direction of other children. He had a ball Saturday climbing up and down a hill in the backyard of a friend’s house whose son was having his third birthday party. Harlan may have been the littlest one out there, but he wasn’t lacking in enthusiasm as he clambered up along with the older children and started a trend of sliding down on your butt.

***Late breaking update*** As I mentioned above, Harlan has been informing us “I poop” for several weeks now, sometimes as a warning and sometimes after the fact. Last night he opted for a heads up. It took me a minute to secure supper, which I was currently cooking, so he started the process in his diaper but finished in the toilet (without any crying at being put on the toilet, which is what has happened at our previous attempts). Yay! Seriously, “yay” and clapping. I’ve never faked so much enthusiasm squatting in a bathroom and peering into a toilet before. When Mom and I looked at little toilets and seats in the store we laughed and laughed at the one advertising that it told “an inspiring story” when used and the one that played like 20 different upbeat musical tunes. But now I realize that those are for parents who don’t want to perform their own encouraging soundtrack.