As long as I get the 2 month post done before she turns 3 months it’s still considered timely, right? We fit in a grandparent tour the week before I started back to work. In fact, her two month picture is taken in Eric’s parents’ backyard. Although Eric is on paternity leave this month, I’ve been busy reacclimating to work. Elise, of course has been busy growing and learning new things such as ‘hands are delicious to suck on’ and ‘hey, I have hands!’ She continues to be a little chatterbox, happily smiling and cooing when you make the contact and talk to her.

And now for her stats: at her 2 month checkup her weight was 10 pounds, 5 ounces, putting her in the 20th percentile, which is a drop from her last appointment. We all had a cold for about a month though,so hopefully now that she’s feeling better she’ll get back to gaining weight faster. Or maybe she’ll take after her brother and hang out at the bottom of the growth chart. She did get longer, measuring in at 22.5 inches, putting her in the 45th percentile. Head circumference was 38 centimeters (30th percentile).

way she does not take after her brother is sleeping. She has good nights and bad nights, but gives me a 4 hour stretch often enough to keep me sane. Also she is rather content to sit in her bouncy seat without screaming and drift off to sleep of her own accord. However it does appear she and her brother have made arrangements to ensure I am never permitted to sleep in and Harlan is pitching in with a middle of the night wake up more nights than I would like. He’s pretty good at timing it for right in the middle of one of Elise’s four hour stretches of sleep too. It’s nice to see them working so well as a team… Seriously though, they love each other so much. Harlan is such a good little helper and is right there when Elise starts to cry to do a funny dance or wave a toy in her face. Although he sometimes goes a bit overboard in his shows of affection, whenever she sees him she immediately smiles and coos at him. I’m so lucky.

Harlan had his 4 year old check up at the doctor today and Elise had her one month. They both did very well. 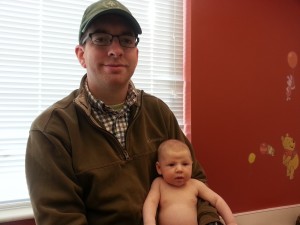 Meanwhile Harlan is now up to 31.8 pounds and is 40.25 inches tall, and thus continues to track along roughly the 5th percentile for weight and 50th percentile for height. He did fine on his hearing test but either needs glasses or did not want to participate in the eye test. He insisted he could only see the large boat at the top of the chart.