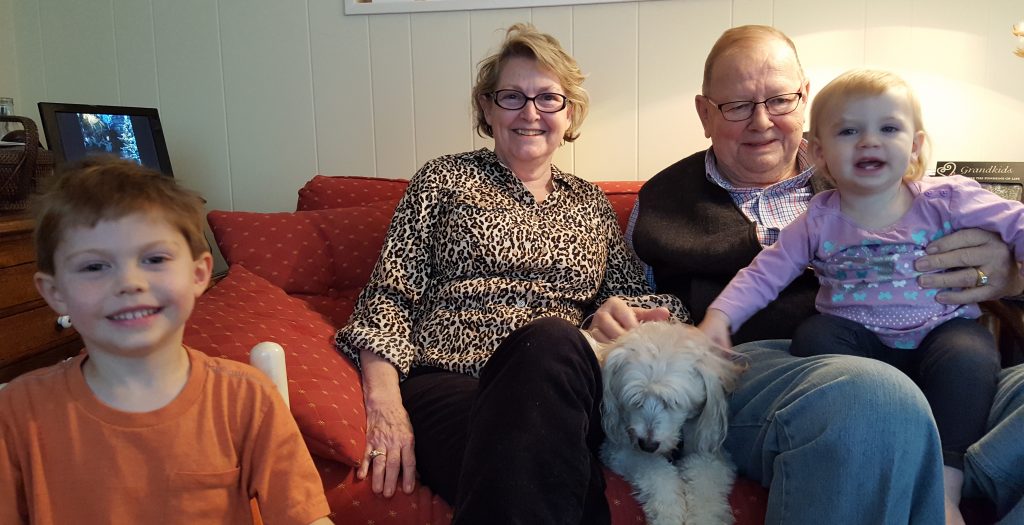 We enjoyed a wonderful Christmas in Plymouth this year. Elise gave out lots of hugs, especially to Cash, who was patient, if not entirely sure about her. She also helped herself to his dog food several times. 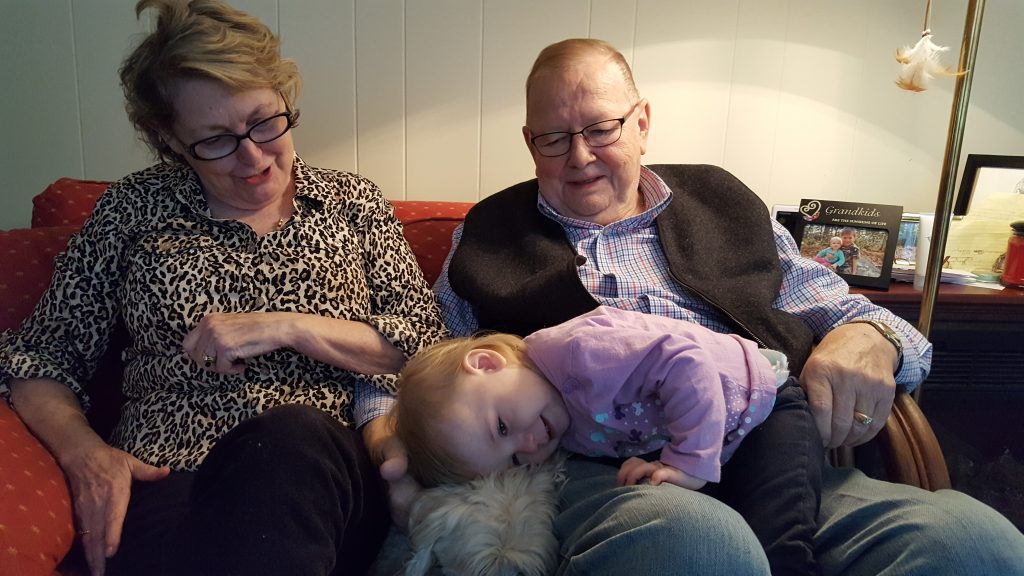 Elise and Harlan were good playing together. We also got to visit Maude Grace and Fred (Eric’s grandfather’s brother).

We spent an enjoyable day at Mattamuskeet National Wildlife Refuge.  This is part of the Pungo District Refuge that we usually visit but we hadn’t brought the kids down here before.  Elise really enjoyed looking at all the birds (stuffed and mounted) in the visitor’s center and Harlan enjoyed running around the trails and looking for animals. 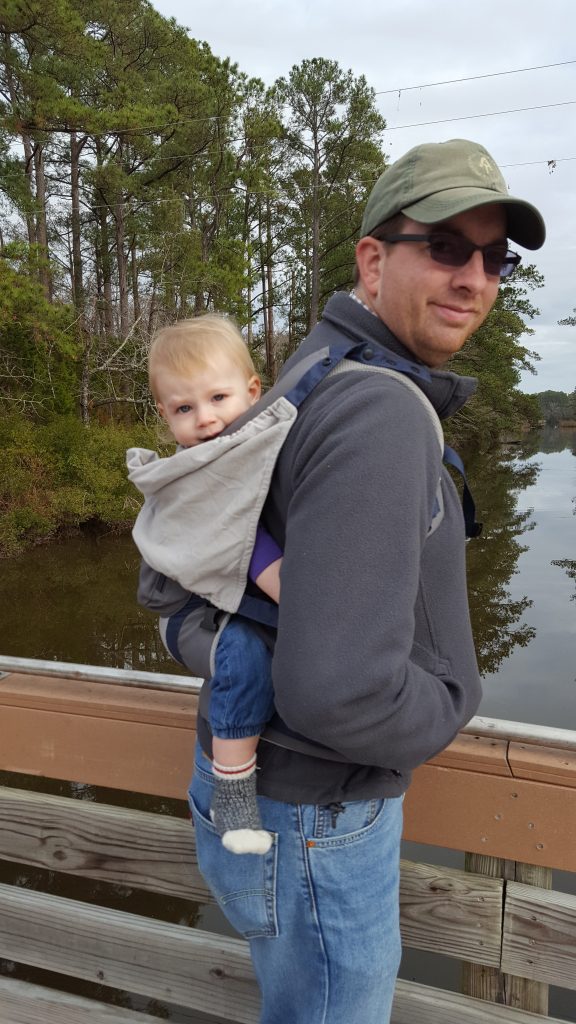 We hiked down to a bird blind in hopes of getting some good pictures of nearby Tundra swan, geese, and ducks but I think they heard us coming.

Harlan managed to run the entire half mile, at speed, back off the peninsula that we had hiked down to see the lake. That boy definitely has some energy to burn!

And, of course, there was the necessary family picture that had to be taken while we were there… 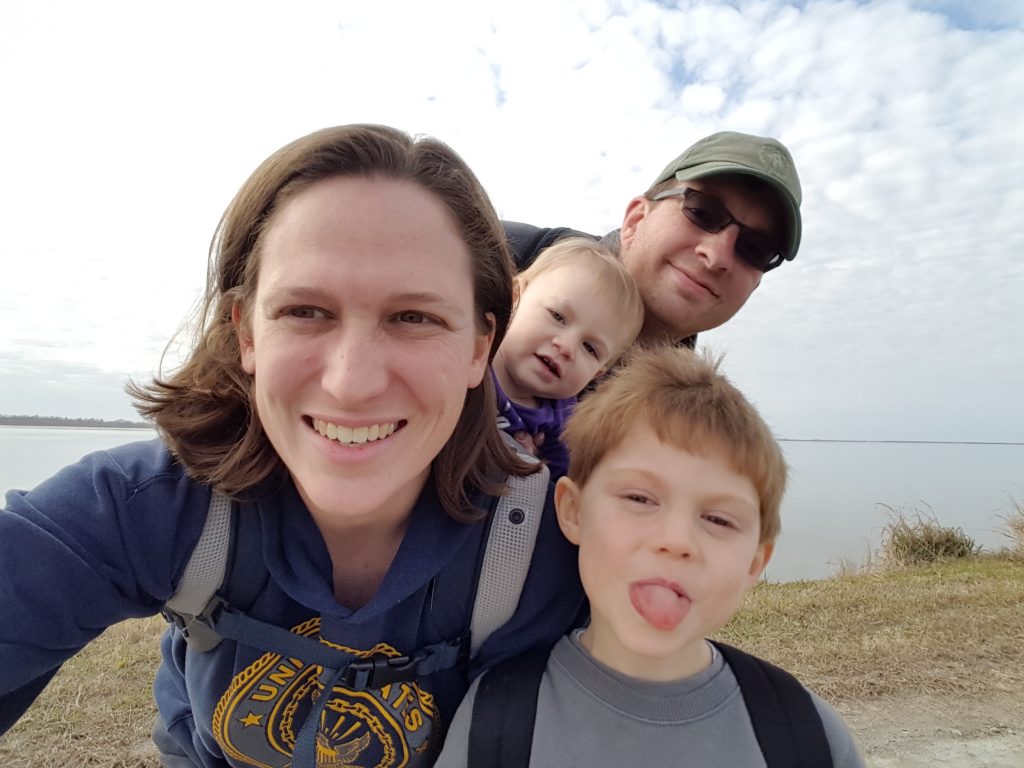 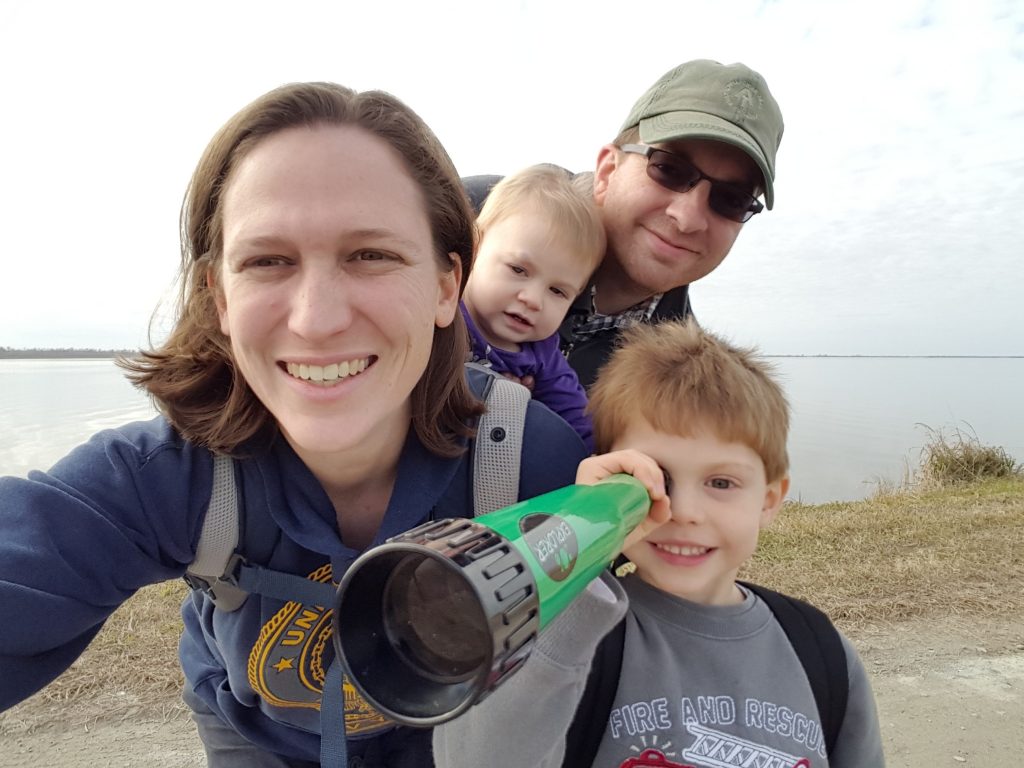 Snapped a picture of Harlan and Elise this morning before they headed off to daycare for their holiday party. Such cuties! Harlan, of course, was looking forward to the gift exchange. He also thought he might talk to Santa about our elf. Yesterday morning the little guy (Futzel Wutzel… don’t hold me to that spelling) was perched on top of a lamp shade in the dining room, his latest vantage point from which to observe our goings on. However, by evening Harlan was first to notice that Futzel Wutzel had slumped over sideways. And then, because I felt how he looked, and Eric just forgot, Futzel Wutzel was still laying rather sadly on his side in an almost fetal position this morning when Harlan bounded downstairs to see where he had moved to. I suggested perhaps he was tired from all the back and forth to the North Pole every night and had slept through the previous night’s scheduled trip. Eric thought he might have been hitting the hard cider. Harlan was concerned that Santa might be worried about him. 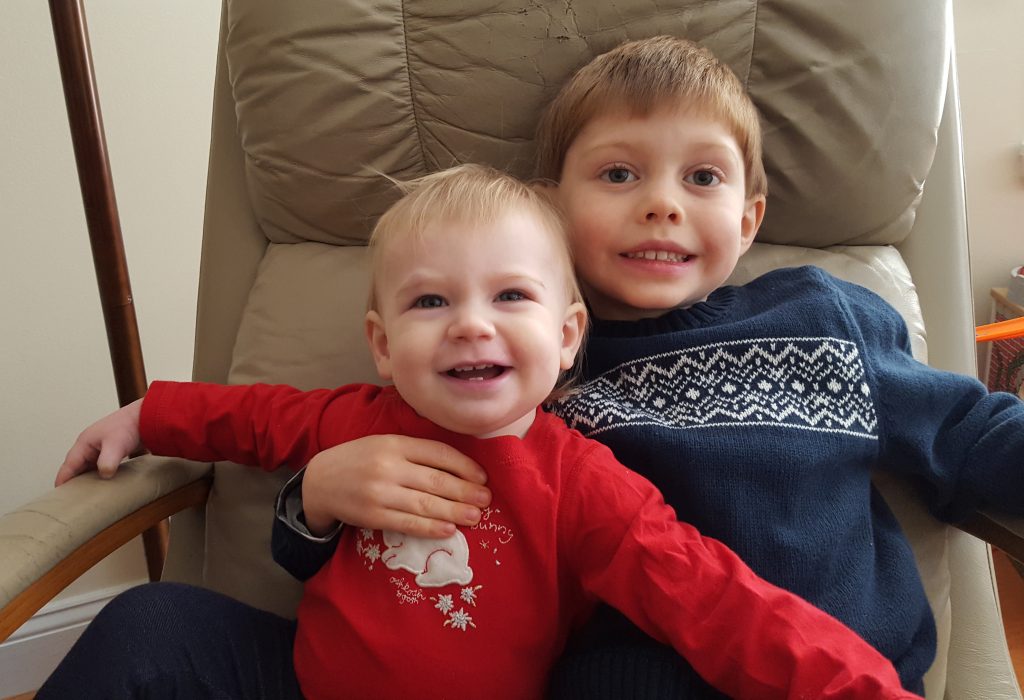 We haven’t done much decorating (Because who has time to drag out boxes and hang stuff up knowing that you will then have to make time to take it all back down again and pack it back up. Heck, I can’t even keep up with the elf.), but Harlan did enjoy hanging ornaments on our little fake tree and helping Eric string some solar powered lights on the fence and tree outside. He also got to go shopping at school for little presents for his family and has managed to keep a secret so far as to what he picked out. He thoroughly enjoyed wrapping presents because it involved tape and scissors and a little more tape (you think you’re getting into that present- haha). Elise meanwhile “helped” with addressing envelopes for Christmas cards. 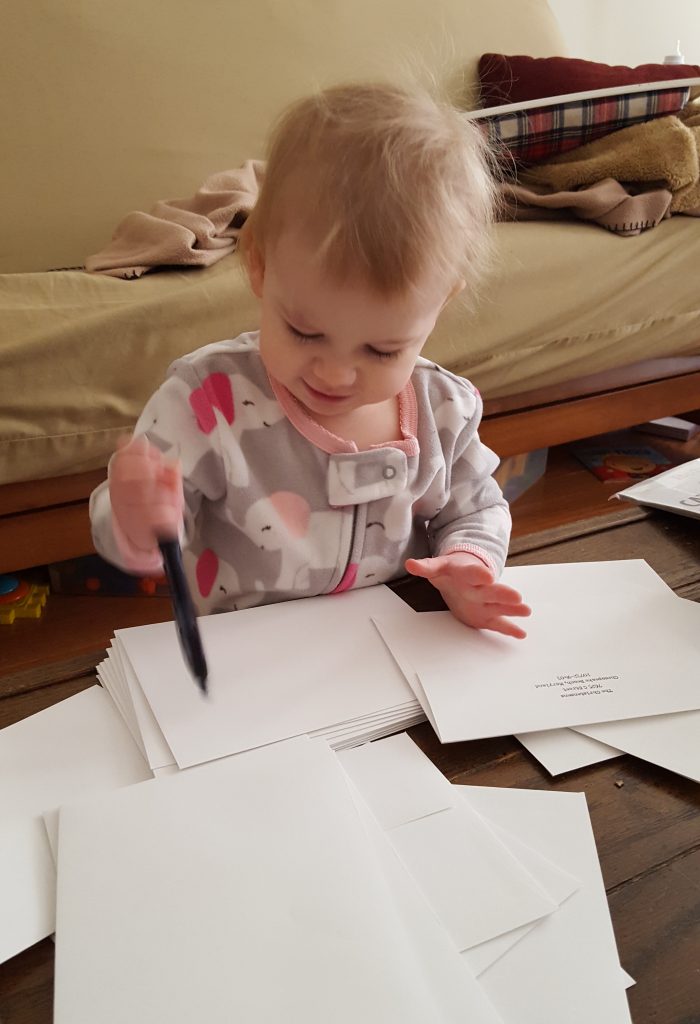 The kids put on an adorable holiday show with their daycare classes. The babies danced. Well, Elise danced, some of the other babies weren’t so sure what was going on. Elise happily bounced up and down for her class’s song though. Harlan’s preschool class did a great job with their choreographed, if not exactly synchronized, dancing and singing. He really got into the show. Meanwhile, he’s also been belting out Christmas carols at home since, it feels like, at least Halloween. Santa was there too. Harlan declined to sit on his lap, but Elise took the opportunity to chill. Harlan was sure this was not the “real” Santa because he did not look like the one who had come to his school last year (apparently, logically, that guy is the real one). He explained to us later that Santa is busy so he has a lot of clones to help him. They must be really talking Santa up at school because he’s totally buying into it this year. I thought he’d be more suspicious, but maybe he just wants to believe. A few months ago he did ask me about the tooth fairy. Just out of the blue he said, “Mom, is the tooth fairy real?” I hemmed and hawed for a bit leading to an exasperated, “Mom, I’m FOUR YEARS OLD, just tell me.” Luckily before I said too much though I managed to get to the basis of the question, which was not whether the Tooth Fairy was an actual living thing, but was the Tooth Fairy a real fairy or just a regular person. 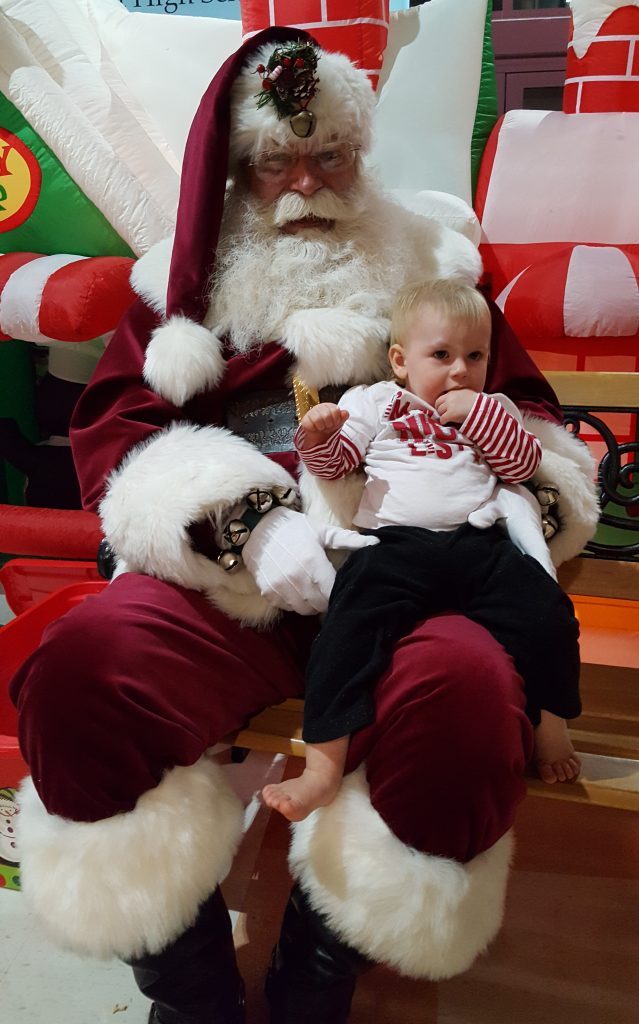