We took a trip to North Carolina last weekend to visit Eric’s parents, and as an added bonus, we got to spend some time with family who were down from Connecticut visiting. Harlan and Elise loved playing with their cousins! Autumn and Tilly doted on Elise, and Harlan kept busy with his usual antics.

After her very attentive cousins left, my fearless and stubborn little Elise tried to take advantage of having fewer watchful eyes on her and did her best to get into a variety of mischief. Mostly she just really really wanted to hug and pet Cash, the dog, who was not as thrilled with the somewhat heavy handed affection. To his credit though, he was very patient with her.

Harlan had a fun time as well, spending most of his time barefoot in the backyard.

I also did my best to get a couple pictures with Grandma and Granddad. 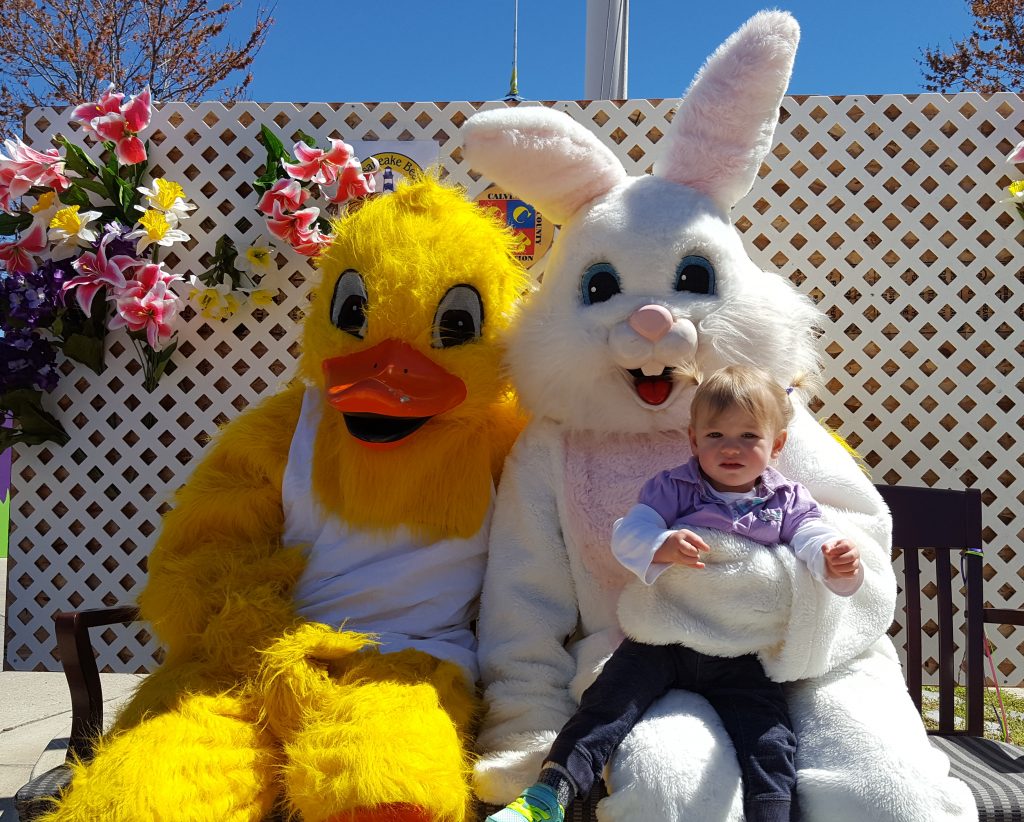 I took Harlan and Elise over to the town Easter festival this weekend. Harlan declined to sit on the Easter Bunny’s lap so I could take a picture, and I think Elise would have been happy to forgo the experience as well, but otherwise they had fun. There was, of course, an egg hunt, which, interestingly, took place in the empty lazy river at the water park because the nearby field was soggy from recent rain. 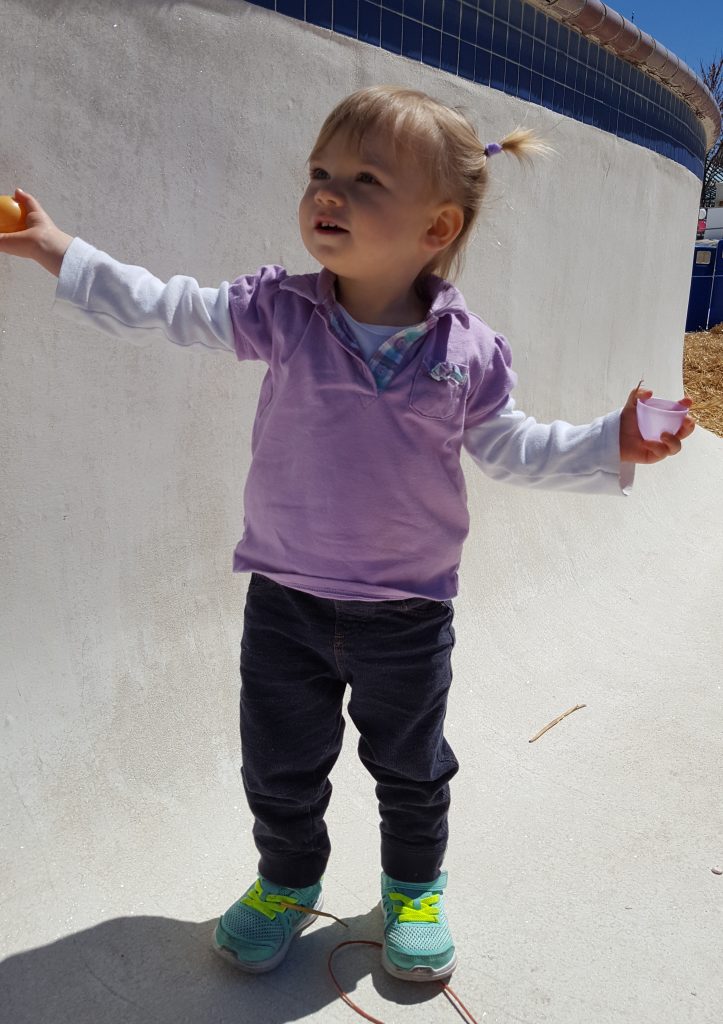 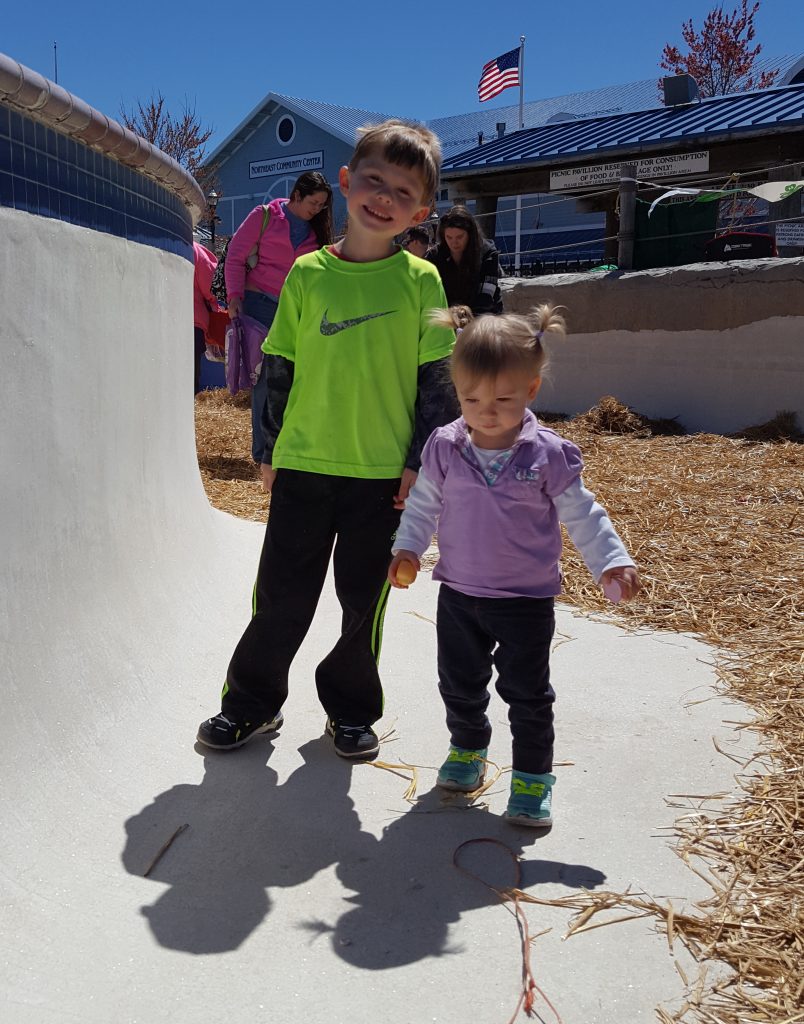 It was a bit of a constrained space for an egg hunt, but the kids were all well-behaved and dug through the straw looking for eggs without jumping on top of each other. Elise was perfectly happy finding the plastic egg halves left behind by the bigger kids ahead of her, but Harlan, the good big brother, located two full eggs for her too. 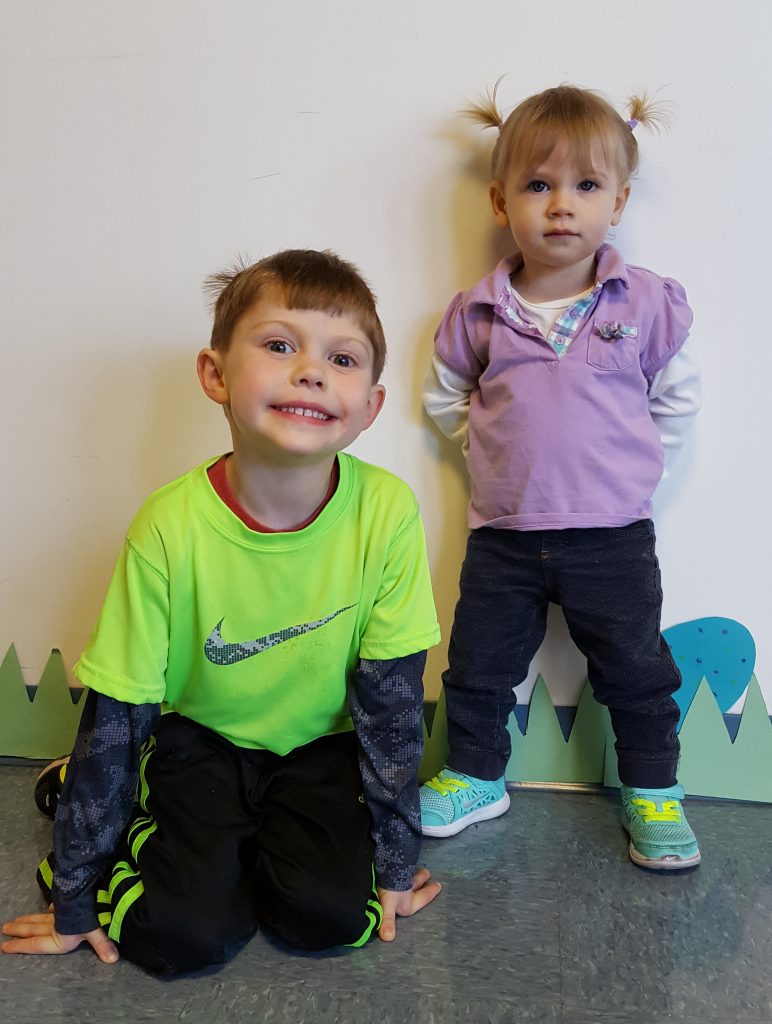 Sunday afternoon I also took Elise over to the Chesapeake Beach Resort and Spa down the street for their Easter festival. It was super windy so their beach events were a bit of a bust, but Elise enjoyed looking at the animals in the little petting zoo. She eagerly reached in to pet all the animals, and calmly, but quickly, pulled her hand out whenever it looked like the goat might want to munch on it. At least I’m pretty sure they were goats. I identified one animals as perhaps a small pony or donkey and the worker informed me it was actually a miniature cow. I didn’t even know there was such a thing! Elise also quite enjoyed squirting the hand sanitizer. She would pet an animal, then run over to the hand sanitizer, then run back and pet another animal, and repeat. 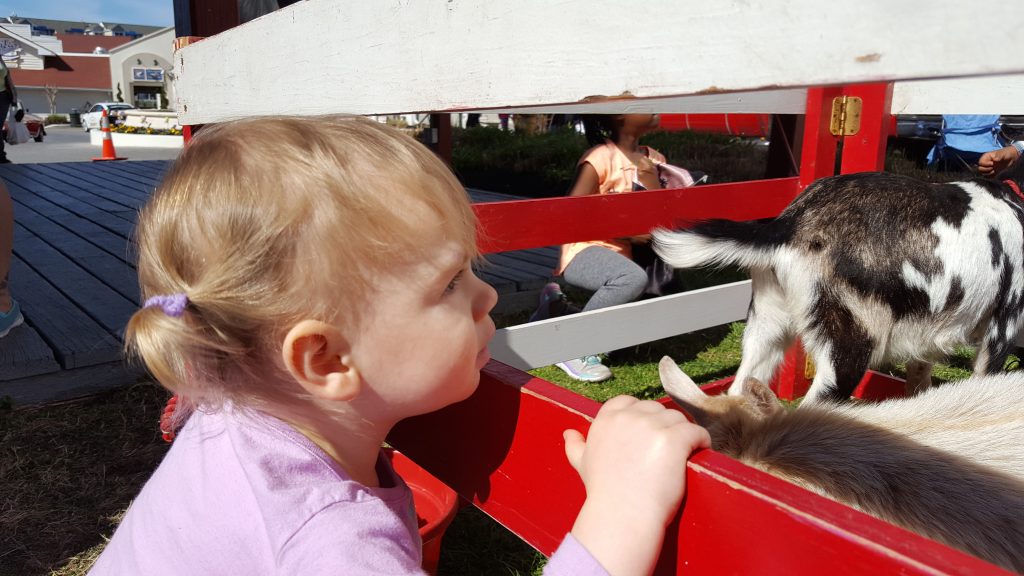 We’ve been reading Sandra Boyton’s “Moo, Baa, La La La” to her, as we did when Harlan was her age. She sorta, kinda says “moo” and “baa” on the page with the cow and sheep. She makes a noise anyway. She definitely does “bow wow wow” though for what the big dogs say. She’s adding words to her vocabulary slowly. She points out “eyes” and identifies them, as well as “feet.” She obviously understands quite a bit, but isn’t much of a talker yet. She has started identifying all caregivers, including the ladies at daycare and Eric, as “mama,” although I think it’s really more of a demand that she wants something. Usually it’s shouted and accompanied by a hand slam on the table. Which makes her sound a bit tyrannical. She’s definitely gotten into the “I want what I want when I want it” phase. Any deviation from her demands (e.g., no you cannot dump my hot coffee onto my lap) is now met with a collapse onto the floor in tears. She recovers quickly though, and overall really is a wonderful kid.

We registered Harlan for kindergarten today! He was so confident walking into the school and agreeably went off with one of the kindergarten teachers for a quick assessment while Eric and I filled out paperwork. She said he did great. He reported that he knew the answers to all of her questions and even told her a story by looking at the pictures in a book. Six months ago I don’t think he would have been nearly as sure of himself. 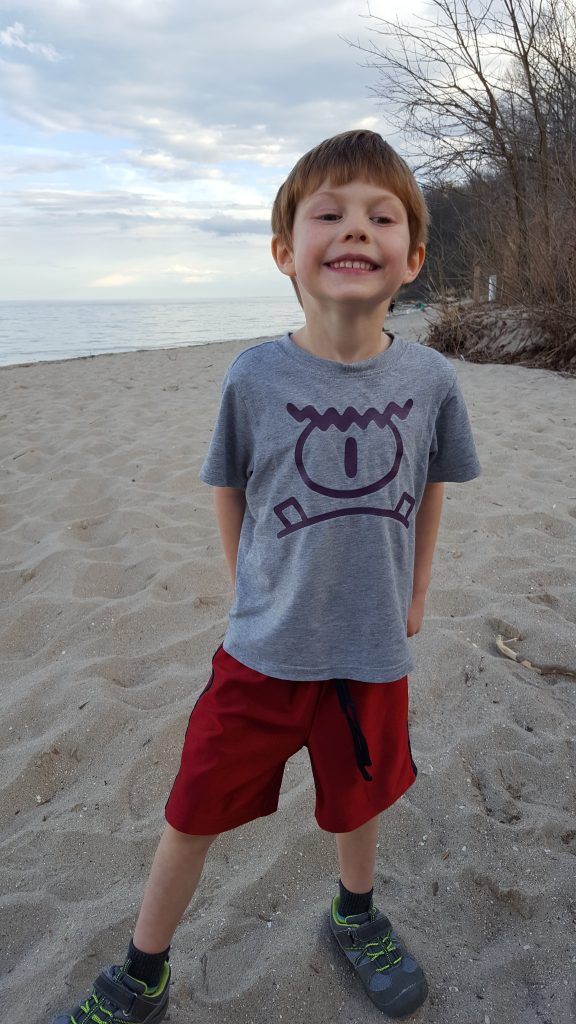 Earlier this week we had a parent-teacher conference with his preschool teacher, and I was so pleased to hear her comments on both his social and academic development. There are seven little boys in the class and she described them all as best friends. Apparently more than two of them together at a time, though, and they just feed off each other and get into trouble. I don’t doubt that, but there is nothing cuter than picking him up at the end of the day and watching all the little boys give him a hug goodbye. He literally hugs his way out of the classroom. I’m glad he has such good friends. And he is excited about learning too. He loves Science Wednesdays with Mr. Rob, and his teacher said he retains information very well. He is apparently an active participant in class, and always has a story to tell. I’m pasting his teacher’s comments below because I am so proud of him. 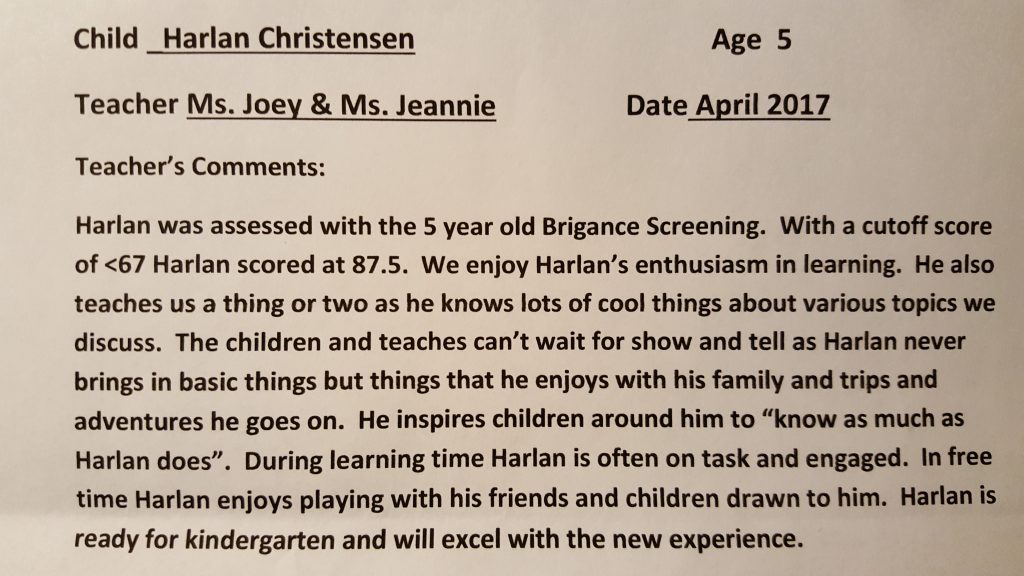 I have seen such a growth in his self-confidence, especially in new situations. I signed him up for Taekwondo at the community center a couple weeks ago, and he went right into his first class without seeming apprehensive at all. I can’t say he always maintains focus (Eric took him this week and reported that Harlan brought the class to a standstill when the teacher saw him licking his foot during the warm-up stretches), but he seems to be enjoying it. Hopefully it will teach him to slow down some and focus. 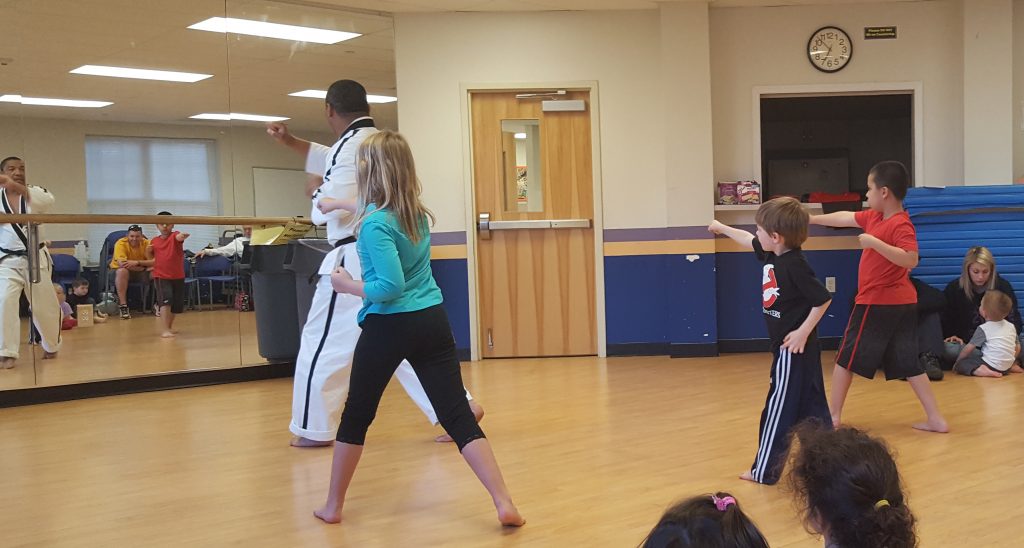 On the homefront, Harlan informed me the other day that he loves Elise more than me or Daddy. They certainly have a special sibling bond.