The raspberries are here!

Our house is nearly surrounded by raspberry bushes; they are everywhere!  You really have to watch where you are going (especially if you’re wearing shorts) if you are going to venture off the grass.  If you don’t know, raspberry bushes have lots of thorns on their stalks (or, at least our variety does).  Poke your hand inside the bush and OUCH!

Today, as we walked to the beach, we noticed quite a few berries ready for pickin’.  We stopped by several bushes along the driveway to pick what was ready and poked around the bushes in the backyard once we returned home.  There are lots of berries that are on the bushes that just aren’t ready yet so there will be more to come soon.  It’s nice to have a nice snack ready to eat when you return from your walk around the neighborhood.

When the Maryland Science Center sends out a message saying they are hosting an event titled “Mess Fest” you know we’re going to have to be there. Abby and her parents had the same idea so we met them up in Baltimore for an afternoon of messy fun.

First, I have to say that the Maryland Science Center never disappoints when it comes to their events.  There are always lots of things to keep the kids (and adults) busy interacting with.  Some are more interactive than others and Elise found as many of the hands-on activities as she could.

The kids built “exploding” fizzy canisters, got to squish mud in their hands, use a power drill to apply paint to a canvas, and many more activities.  There were also demonstrations that were being done outside for the enjoyment of all.  This included dropping paint balloons off the roof onto a canvas and using liquid nitrogen, colored water with detergent to create an explosive, sudsy mess.

They say that a picture is worth a thousand words so I’ll just let the pictures do the talking for me:

Back in May I reported that Harlan had started taking Tae Kwon Do classes at the local dojang.  Well, today was the day for taking his first test, the reward being his first belt.

Harlan has been working hard for around two months and has stuck with a training program that takes him to the dojang three to four days a week for one to two hours a day.  He’s made several friends and his skill level hasn’t stopped him from trying things that are well outside of his training level (he likes to brag that he was doing Brown Belt jump kicks).

The day started off normally with warm-ups at 11AM.  Everyone knew this was a testing day but that didn’t keep a little goofing off from happening.

He did very well and, of course, there’s always room for a little showboating…

Harlan scored a perfect score and was awarded his White Belt in Tae Kwon Do!

But that’s not all that happened today.  The Christensen family represented a third of the testing applicants at today’s event.  Dad, “the old man”, has also been paying attention during these Tae Kwon Do classes and has been known to get out on the mat and do a few kicks and punches now and again.  A week or so ago I was informed by my sensei, Master Parker, that I would be testing for my White Belt today and that I should be prepared.  Yikes!  So the last couple of weeks have been spent doubling-down on my training both at the dojang and at home.  Because I’m considered an adult (how he came up with that I’ll never know) I also had to write a research paper and do a special finale.

There is some video of my demonstration but if you watched Harlan’s videos then you’ve pretty much seen everything I had to do only you saw someone far more competent do it.  The one thing Harlan didn’t have to do was this…

That’s right ladies… the line forms to the left… right after my nap.

Elise had a good first week in the toddler room at daycare. She’s now officially a “little rascal” (her new classroom’s name is The Rascals). She has been enjoying all the new toys in her new classroom and especially getting to explore the big kid playground. As an added bonus sometimes she gets to play with Harlan on the playground or at the end of the day when they combine the classes for parent pick-up. Her teachers say she likes to wander off, but is overall fitting right in. They say she is friendly and curious and apparently loves to climb up on the stool and wash her hands.

She also had her 18-month check-up at the pediatrician Friday. She was, as usual, very well-behaved. She’s on the low side for talking, but she understands so much, I’m not worried. And she demonstrated her sign language for the doctor, signing both that she wanted something to drink and that she wanted lotion on her arm during the appointment. She dropped down a bit on weight, into the 20th percentile at 20 pounds, 9.4 ounces. Her height is still in the 50th percentile at 32.15 inches. And head circumference is in the 10th percentile at 44.5 centimeters. Her BMI is 14.

Summer is here and there is a lot going on. Here are a few photos with captions:

Harlan and Elise recently “graduated,” him from pre-k and her from the baby room. The graduation ceremony was a couple weeks ago. Harlan will be finishing out the summer with his preschool class before starting kindergarten in the Fall. Elise moves up to the toddler room next week!

They have both gotten so big and grown so much this year. Harlan is very excited to start kindergarten and regularly asks how many more days until school starts.  He informed me the other day, very seriously, that he had outgrown his current class. I agree. He’s ready to go. 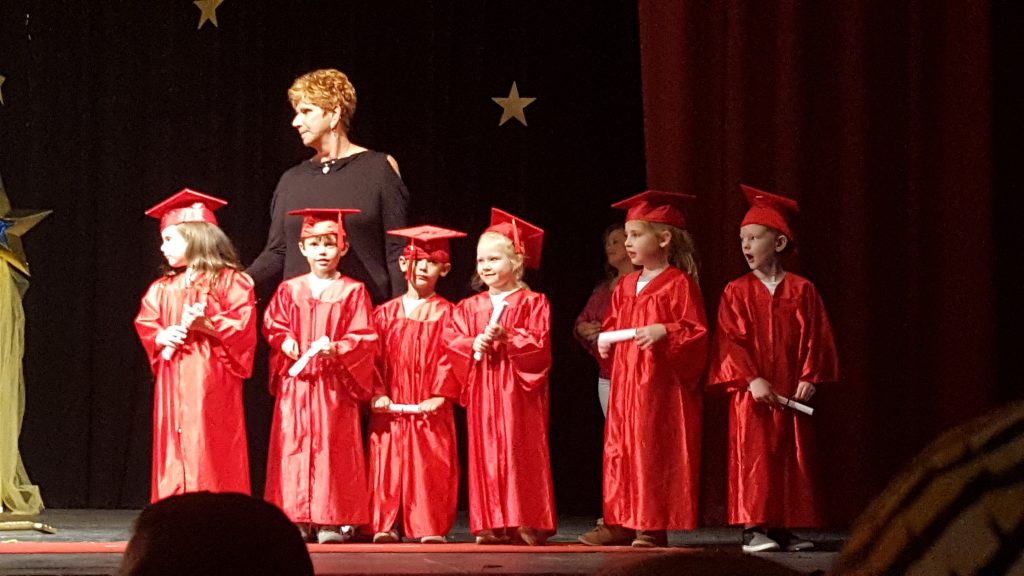 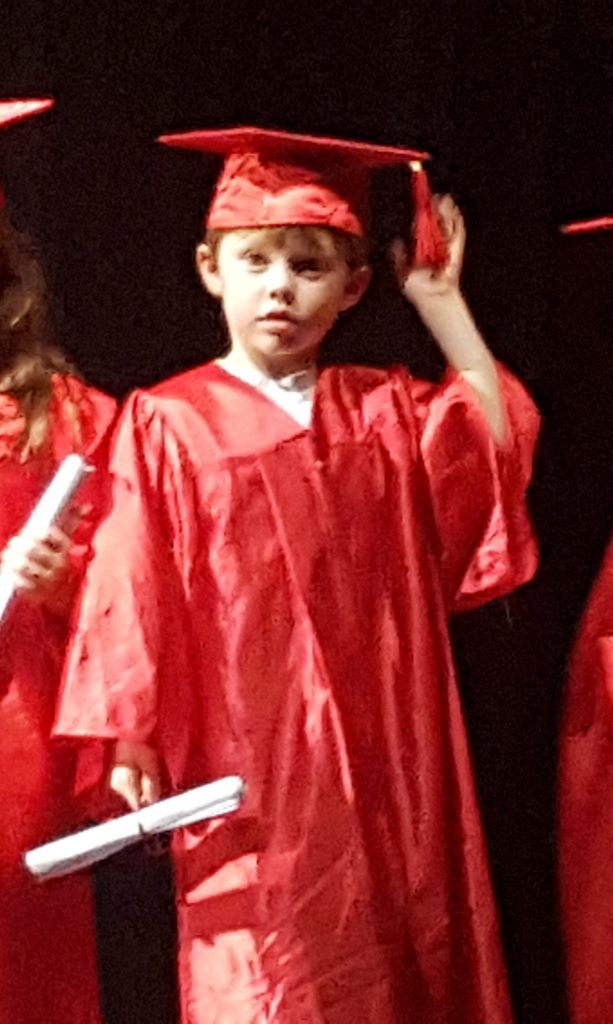 Elise I have bittersweet feelings about moving from the baby room to the toddler room. We love the baby room teachers and they genuinely love Elise. The toddler room is going to be a more structured setting with more kids. I’m not sure Elise shares any of my reservations though. She has been spending a couple hours a day with her new class as she transitions and has shown no problems adjusting. Knowing her, she’s thrilled to have new toys and areas to explore (the big kid playground!). She’s very social too, so even though she’s in a room with kids as old as 3 now, I doubt she’s a bit intimidated. She’s not much of a talker so far, but I bet she’ll learn a lot from the older kids quickly. The baby room teacher has no doubt she’ll hold her own. She has apparently learned the phrase “not nice” and shouts it with gusto when crossed (prounounced “not nie” because she leaves out the “c”).

Oh, and I should record their predictions for the future as well. At the graduation program they read a few sentences about what each of the kids said they wanted to be when they grew up. I have to say, I’m not sure the strength of the job market for so many career princesses and ninjas, but hey, a kid can dream. Harlan settled on engineer. Good boy! Since Elise has both limited experience and vocabulary, her teachers offered their own prediction: pediatrician. I would be proud. 🙂

Each class also put on a performance with singing and dancing. Harlan’s class did “Twist and Shout,” which meant we were treated (and still are) to him periodically belting out his somewhat garbled version of the lyrics that involves shaking a baby. All the classes also got together for “Seasons of Love” from Rent, which he also serenades us with, although five hundred, twenty five thousand, six hundred has proved a difficult number to remember. 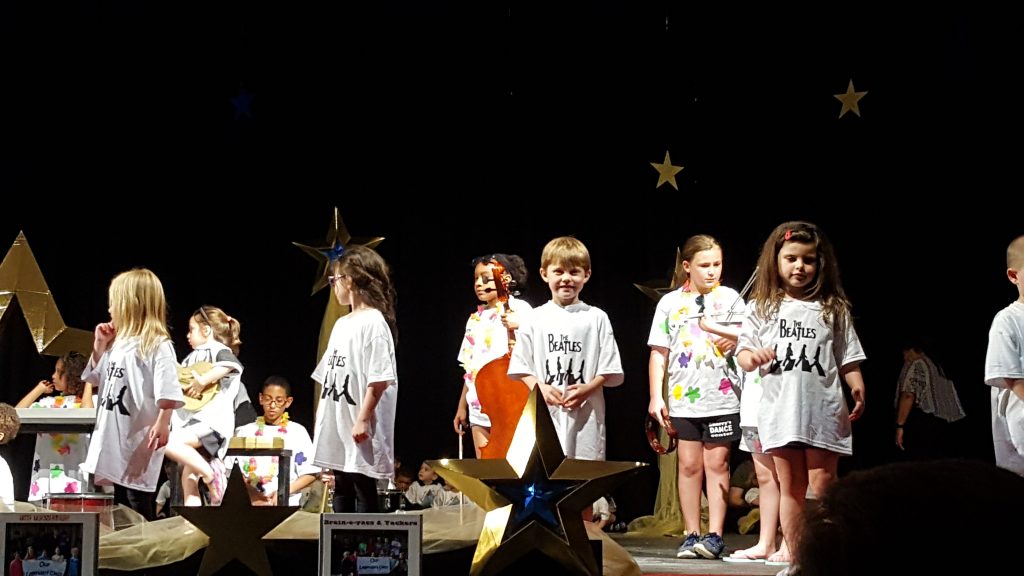 Since it is end-of-the-year related I’m going to throw in one more picture too of Harlan’s gymnastics demonstration. He still can’t do a cartwheel, but as far as I can tell the class involved a lot of jumping and tumbling, so Harlan was happy with it. Especially the jumping. Lots of jumping.