First snow of the season

We received a little snow on Saturday. It was nice to watch coming down and Harlan and Elise took full advantage of what little accumulation we received, about 2.75 inches, and went sledding. We need better slopes for sledding and we’ll be looking into that shortly.

Years ago, before kids were a consideration, Amanda and I purchased a tent that was perfect for hiking.  Lightweight, small, and easily packed in one of our hiking packs, this little tent is great… for the two of us.

Well, I say “two of us” but we’ve certainly had Harlan squeeze in between us in the tent but now that he’s six, and Elise is here, I’m guessing that we won’t be able to all fit inside that nice, small, lightweight hiking tent anymore.  And, in the end, that’s okay, as there will still be times when there will be only a couple of us that will want to go out on an excursion and the hiking tent will still be useful.

Getting back to the point, Amanda and I have been looking at options for a larger tent.  Nothing that was an RV-sans-wheels type of tent but something that was large enough to handle a family of four as some of that four grows larger.  Today we introduce an upgrade to our vacation accommodations: 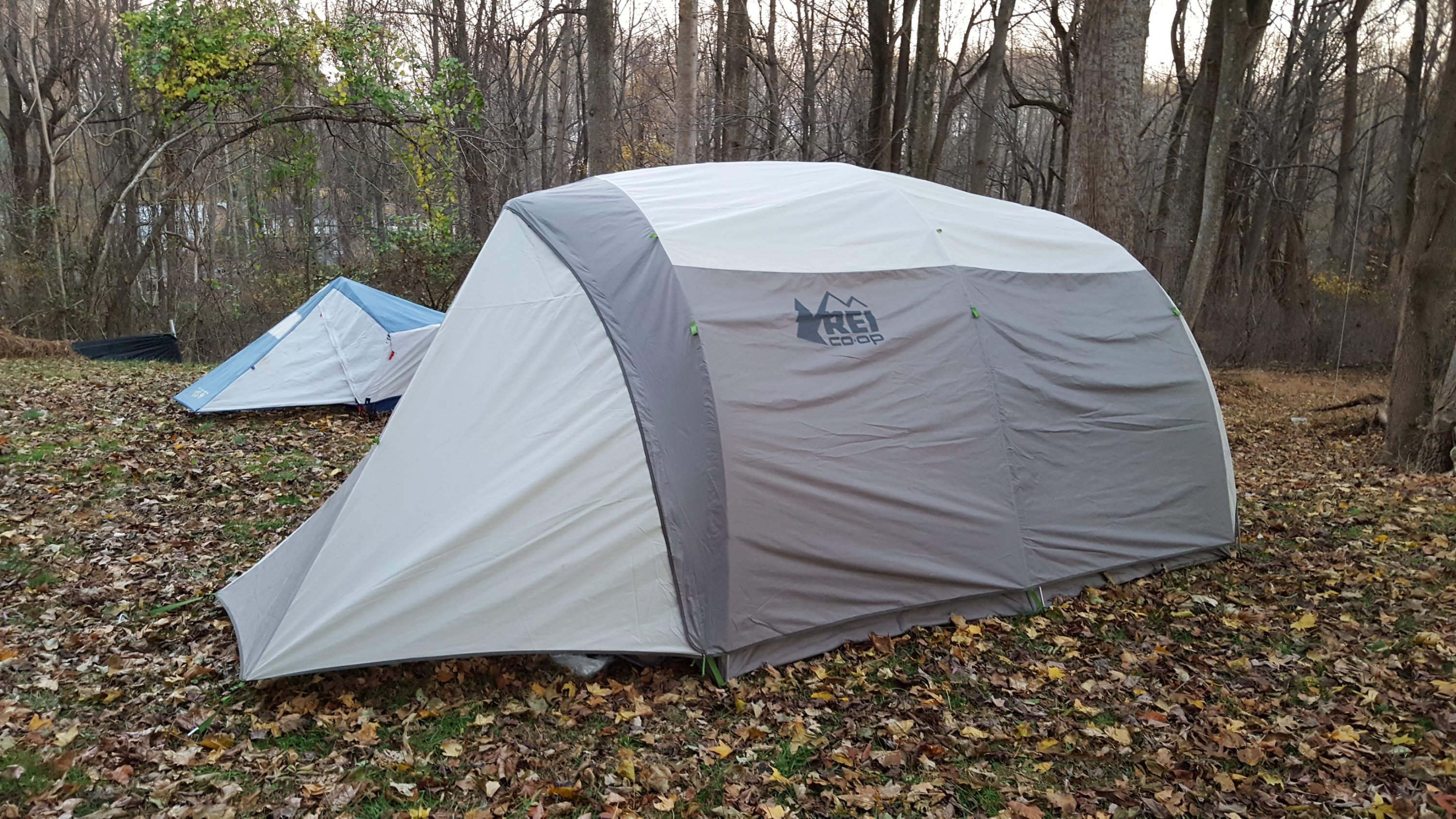 This is a six-person tent that has a divider in the middle to form two rooms. There is also an addition that we plan to get in the future called “the garage” that adds additional outdoor storage that is covered and protected from the elements. Think of this tent as a great family base camp shelter.

I’m excited to put this tent in service and try it out; perhaps once it gets a little warmer.

Elise just had her two-year-old well visit. She was the most wonderful little patient, watching the finger prick to test her lead and hemoglobin levels with interest and merely looking at me and noting “ouch” when she got a shot. She didn’t even fuss when we got sent to have her blood drawn to double check her hemoglobin level a second time. She is just the most chill kid.

Despite being a good little eater, she takes after the rest of the family and is still clinging to the bottom of the growth chart for weight. At 22.8 pounds she’s in the fifth percentile. I suspect both due to genetics and, like her bother, she’s in perpetual motion, always exploring something and burning calories. She’s also a very enthusiastic, and surprisingly coordinated, jumper. We went to a community festival recently and she crawled right into a bounce house and leapt to her heart’s delight, not a bit intimidated by the larger kids.

As for height, she’s 34.25 inches (or slightly taller if you believe the standing measurement instead of the laying measurement), putting her in the 60th percentile for height.

She’s made notable advances in speaking since her 18-month appointment. She still says quite a bit that is unintelligible, but she is finally starting to really communicate. She certainly knows the phrase “I want ____” and likes to order you to “sit down!” Any inquiry as to colors is usually answered with “purple,” shapes are all identified as “circle,” tools are mostly “hammer,” and a question involving letters is usually identified as an “e.” She is quite observant and likes to copy everything she sees others do. Sometimes it’s entertaining, sometimes it’s helpful, sometimes it’s frustrating (depending on what Harlan is up to!).

She continues to be quite the independent tyke. The memos on separation anxiety and stranger danger have never gotten to her or she’s just decided to disregard them. She’s social and adventurous and generally is a pretty interesting kid. Also she decided to start using the potty of her own accord over the summer, although her track record on getting certain more solid objects into the porcelain bowl was not so good, so she just started wearing underwear to daycare after Thanksgiving. Not bad for a newly minted two-year-old though.

My little munchkins are getting so big! Elise recently turned 2 and Harlan 6. They got in extra celebrating this year with presents and cupcakes with Nana and Papa after Thanksgiving, and then family fun on their actual birthdays, and finally Harlan had a party with his friends.

Harlan had his party at the dojang this year. Master Parker ran the kids through some kicks and a min-obstacle course and the kids just generally ran around like crazy. It was a lot of crazy. He had a couple boys from his kindergarten class as well as a couple from his pre-k class from last year as well as other friends. They should all sleep well tonight once the sugar wears off.

Our Thanksgiving holiday started early with our friends Katie, Joe, and Jessie visiting from Ohio.We enjoyed hanging out and even getting to visit Erin, Bill, and baby Joy.

As soon as we saw them off Eric went down to North Carolina and picked his mom up for a visit. I didn’t get a photo of the two of them, but Elise particularly loved having her grandma visit. First thing every morning when she woke up she ran down to the guest room to find her.

As soon as Kathy left, my parents arrived for their first visit since the weekend we moved into the house.