My baby girl is getting so big! She turned 3 this year and did plenty of celebrating.

Nana and Papa left right before her actual birthday, but we had a family celebration while they were here with cupcakes and presents.

On her actual birthday I baked mini cupcakes for her class and Daddy delivered them for afternoon snack along with ice cream and SPRINKLES. She was most pleased about the three bottles of sprinkles and her classmates getting to choose which kind they wanted. No photos from preschool, but here she is eating breakfast her birthday morning. Happy girl. 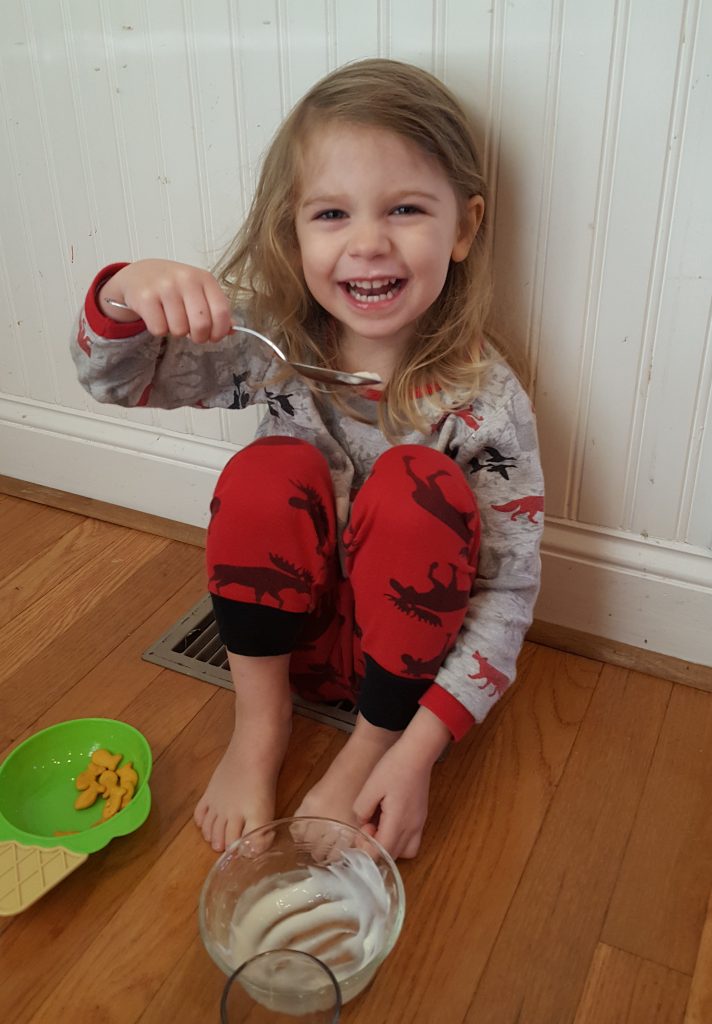 It was a grandparent Thanksgiving this year with both my parents and Eric’s mom (and her dog, Cash) all joining us. Apparently after dropping off Elise at preschool the day after Grandma arrived, she went up to her teacher and announced happily, “Grandma came to visit and she brought cash!!” With some followup questions her teacher figured out Cash was the name of Grandma’s dog, but she was amused at her initial impression of grandma walking in with a wad of bills. Kathy and I joined Elise’s class for their school Thanksgiving celebration. Elise was a cute little turkey. As for our own Thanksgiving feast, we got the turkey mostly defrosted this year before the big day, and turned out a counter-full of side dishes. Yum!

I’ve got to lead this post the way Harlan would want me to- It’s snowing!!! Actually it’s more a wintry mix right now, but at 7 this morning it was snowing. As soon as Harlan saw it he put on his coat and headed out to play in the yard. He managed to make some small snowballs, and even, helpfully, brush off the car windshields. Then he had to put on dry pants for school. And speaking of school… he brought home his first quarter report card yesterday. Grade options are Outstanding (achievement and performance exceeds county and state curricular standards), Good (shows growth beyond standards), Statisfactory (meets standards), Inprovement Needed (inconsistently satisfies standards), and Unsatisfactory (fails to meet standards). Harlan was marked outstanding in all subjects: math, reading/speaking and listening, writing/language, science, social studies, art, music, and physical education. Yes, even music! Apparently he has decided to participate in class this year, unlike last year. I had a parent/teacher conference with his teacher Monday and she said he would be in the group to start “challenge math” next month. I hope it actually is challenging for him. Even though the pace at school is slower than his abilities, his teacher said he is excited for learning, and he has made a new set of friends in his class (there is only one boy from his kindergarten class in his first grade class). 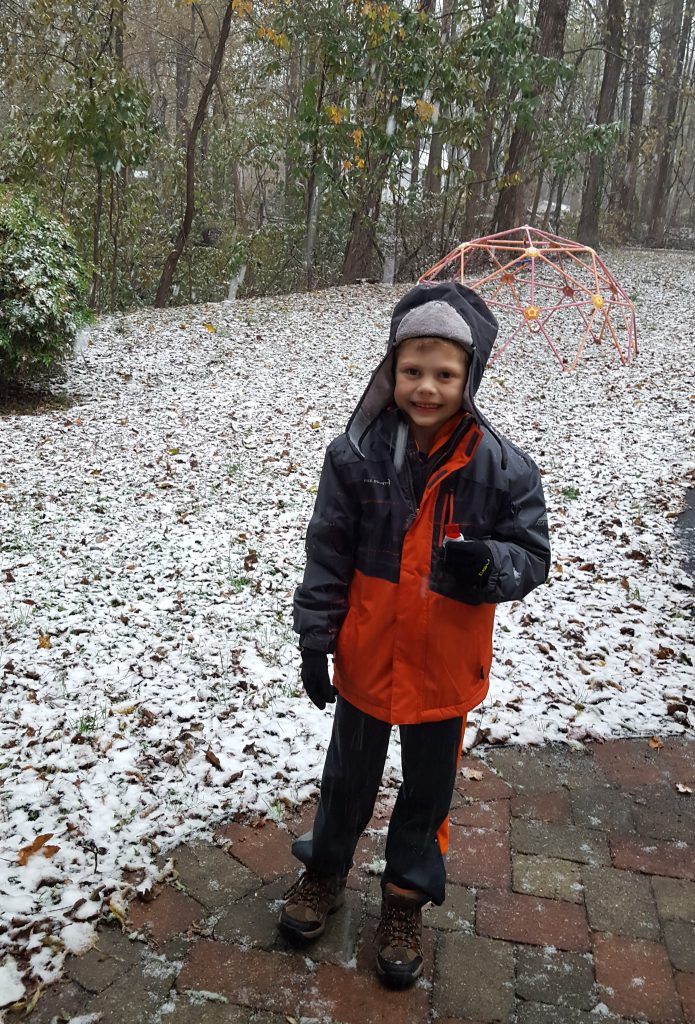 Pumpkin spice is everywhere. Our driveway is buried under leaves. It’s fall! Here are some photos of recent fall fun.

We didn’t make it as a family to a fall festival this year, but Elise went to a birthday party at Greenstreet Gardens and had a great time.

We carved a pumpkin at home, and I also went to Harlan’s class and carved a pumpkin with him and three of his classmates (in addition to taking various measurements, counting the seeds, seeing if it would float, etc).

Of course there was Halloween. Harlan had dress like a book character day at school that day. The flyer said he should dress like a character from his favorite book. His first suggestion was Charlotte’s Web, and I should make him a spider costume. I suggested he pick a costume we already had like pirate and then find a book with that character in it because I was not the mom that was going to be sewing eight legs onto a spider costume. We settled on dressing as Racso the rat from Racso and the Rats of NIMH by Jane Leslie Conly, which I read to him over the summer. He preferred the original Mrs. Frisby and the Rats of NIMH by Robert C. O’Brien, but he also had to complete a story board that only had three boxes for beginning, middle, and end, and we decided it was going to be a bit difficult to summarize that entire book into three boxes. Halloween evening we went trick-or-treating. Many of the neighborhood kids gather at one house and head out from there. Elise loved the kid in the inflatable dinosaur costume. She grasped the idea of collecting candy much better this year, and wasn’t trying to eat it at the same pace as she was given it. One guy was sitting next to his bowl of candy with all kinds of scary decorations around. She looked warily at the smoke machine, skeletons, creepy dolls, etc. but bravely walked up to the candy bowl. Then a motion activated hand lurched out as she reached for the candy bowl. She was having none of that. She hastily retreated. The man tried to coax her back, offering he would hand her the candy. She took a few steps, turned her body sideways and stuck the hand holding her pumpkin basket out. Closer, the guy said, I can’t reach. She took half a step. I still can’t reach he said. She leaned forward a bit. Still not close enough. She evaluated the situation. “No, thank you,” she said, and walked away. Just not worth it. Harlan and Elise dumped their hauls together in one pile when they got home and each picked out their favorites (which luckily are different). They are going to be hopped up on sugar for a month.