While Harlan and Elise are too young to join the Aiki Jujitsu class, I have been encouraging Harlan to learn ukemi to help protect them from inevitable falls when they are out playing. Last night Elise decided that she was going to show that she, too, could do her side ukemi as well and so impressed Master Parker that she got to bow out between the Gokyu and first Yonkyu!

My heart got a checked up today. 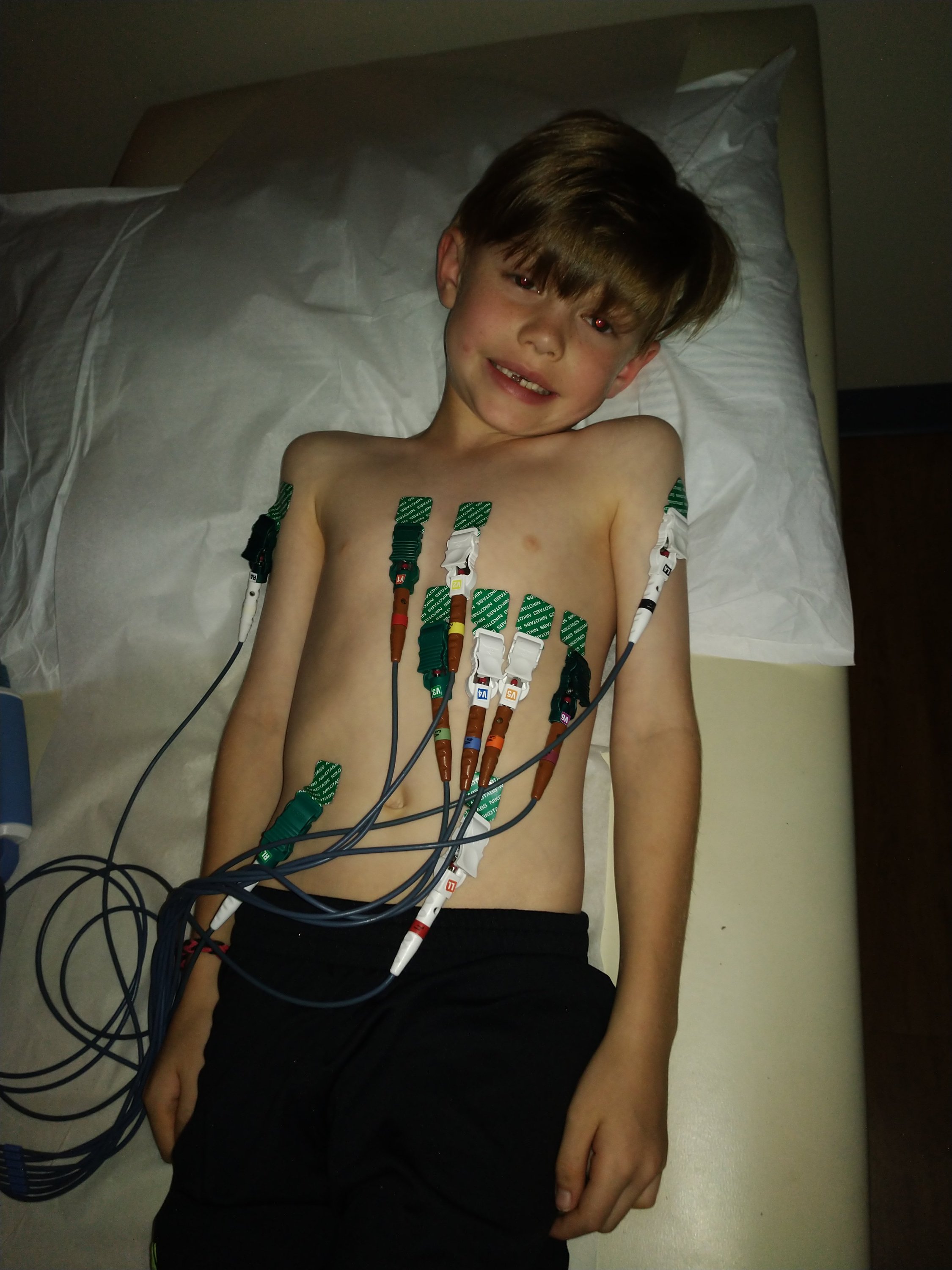 Harlan had his annual cardiology checkup today which involves a 12-lead EKG, as seen above, and an extensive echo cardiogram.  Three minutes into the echo and Harlan had fallen sound asleep.  I guess waking up early this morning, spending a day at camp building, running, jumping, and playing, was just too much and laying down in a nice, quiet room was enough to make him sack out.  He slept through the rest of the examination and the ride home.

Nothing has really changed with the VSD although the velocity of the blood going across the hole has increased, which is a good thing.  The doctor said that he’s not concerned with anything that he’s seeing and that he’ll see us next year!

I lost my third tooth. I look like a jack-o-lantern. 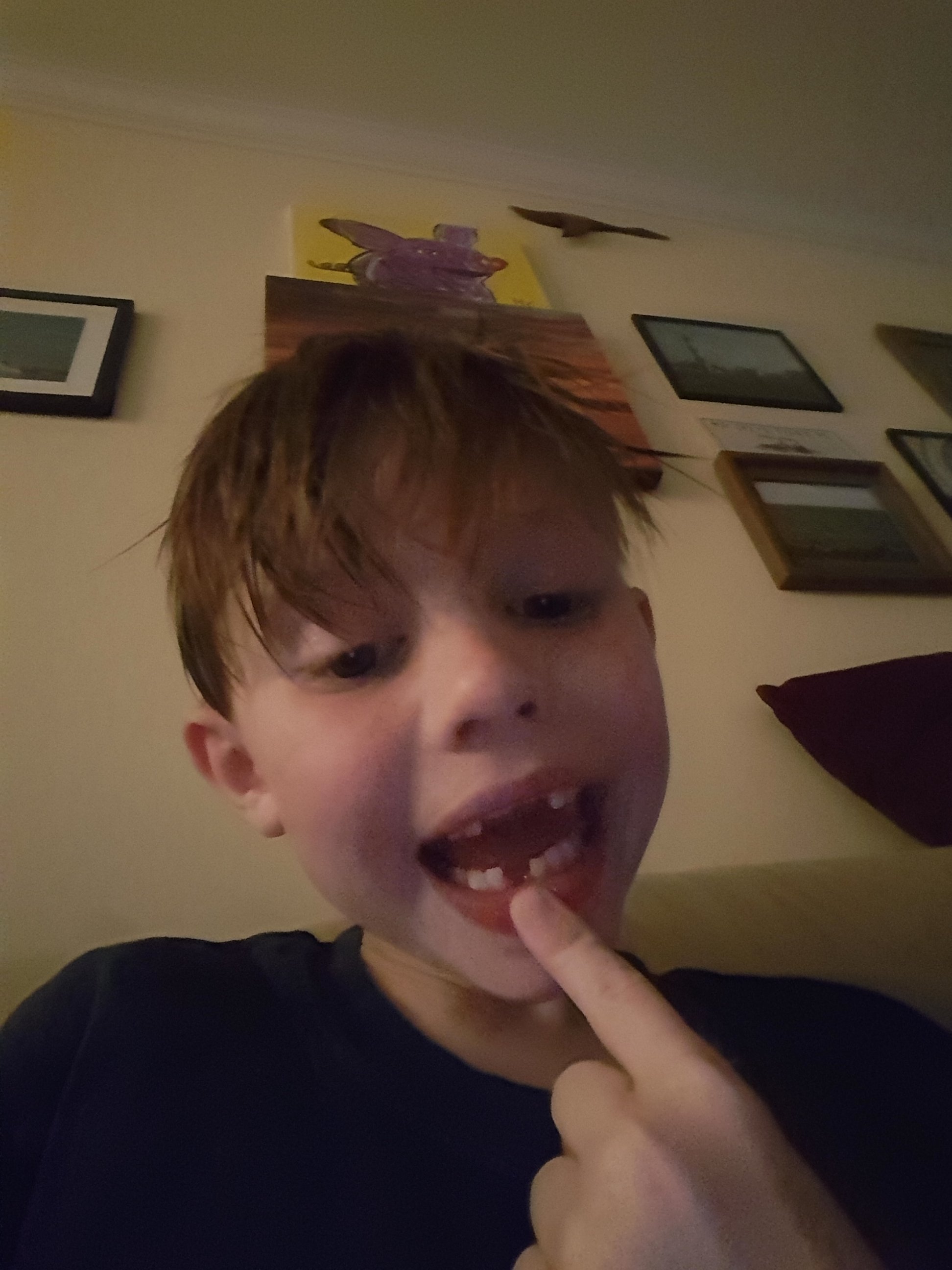 We snuck in a trip to NC before the kids started summer camp. They were excited to discover that Grandma’s blueberry bushes had ripe blueberries unlike our ones at home. They enjoyed picking (and eating) the berries, running through the sprinkler, digging in the mud, and otherwise running around the yard.

We also got lucky enough to have a nice visit in Greenville with Carolyn, Uncle Ben, and Cousin Tilly. Afterward we had lunch with John and his girls and then they took us to what they call the “zip line playground.”

All four of us were at the library, earlier today, making a kite when Amanda excused herself to go to the restroom. Elise looked at me and said “now we don’t have parental supervision!”. I asked her what I was and she said “you’re Dad, you’re not Mom.”

This is probably the most accurate statement ever uttered by my kids.

Harlan finished up the year with mostly Outstandings on his report card and some Goods (the scale is Outstanding, Good, Satisfactory, Improvement Needed, Unsatisfactory). Writing/Language, a grade that appears mostly based on spelling tests, dropped from Outstanding in the first quarter down to Good for the second, third, and four quarters. I strongly suggested he might try actually studying the spelling word list each week, but he opted for a mostly wing it strategy. It’s interesting that a word he has no trouble reading, when forced to write it later, he’ll mispell. Overall, he treats reading and writing like it is slightly less torturous than he did at the start of the year. He’s certainly better at both. If he doesn’t think about the fact that he’s doing it, he’s actually quite proficient. His Reading/Speaking and Listening grade was an Outstanding the first three quarters and a Good in the fourth quarter. As for his preferred subjects, he earned an Outstanding in Math, Science, Social Studies, Art, and PE all four quarters. He remembered he didn’t like participating in music class halfway through the year and his Outstanding the first two quarters dropped to a Good for the last two quarters. His music teacher indicated he “sometimes” exercises self-control and follows directions. His classroom teacher pegged exercising self-control at “rarely” and shows consideration for others at “sometimes.” Rarely sounds a bit harsh for exercising self-control. Perhaps it is fairly rare that a day goes by that at least once he fails to exercise self-control in a circumstance where he should, but surely in terms of a full school day he manages to exercise self-control more than just rarely! I mean, he came home with a fair number of notes, but they didn’t suggest he was bonkers all day. I suspect showing consideration for others is related to the lack of self-control as nearly all the notes were related to him cracking jokes in class and talking to his friends when they should have been working, which prevented the teacher from teaching and his buddies from doing their assignments. In a slightly different vein, a couple weeks ago he came home with a “restorative justice” form where he had to meet with the principal after he stuck a post-it note on a toilet that said “do not flush.” (I’m told the toilet was not a party to the conversation, so I’m not sure restorative justice was achieved.) Apparently this joke was absolutely hysterical to his classmates, who he told about the note on his return from the bathroom. He got busted because there was a sudden rush for the bathroom because they all wanted to see this little act of hilarity. I, and I presume the principal, tried to explain that an unflushed toilet is actually gross, not funny. Our opinion; however, is worth less than the opinion of his classmates, with whom the act was a hit. I told him to write an apology note to his teacher. His first attempt read simply “It was funny to me. Not to you.” …

Here are some snapshots from the last day of school.

May went out on an exciting note, with an exhausting (for me anyway) day at Harlan’s school’s field day AND Harlan doubling the gap in his top row of teeth. Yep, he yanked the second front tooth out before heading home from school on Friday. When you lose a tooth at school you get a little plastic, tooth shaped box that hooks onto a necklace to carry it home in. Harlan was as pleased with that as he was his first place field day ribbon, which, as far as I could tell, was based on a very fluid scoring system of effort and sportsmanship as well as perhaps athleticism. I was in charge of the potato sack race for kindergarten through second grade. It was hours of semi-controlled mayhem. And very hot.

Saturday we went to the library’s summer reading kickoff celebration and then the start-of-summer family celebration at the community center. There was lots of crafting and even a bounce house inflatable obstacle course that the kids ran through several hundred times (it felt like to me anyway).

Sunday, Eric and Harlan did dog search team training in the morning, and then Elise and I met them for a hike at the American Chestnut Land Trust. Bark in the Park was also going on in the afternoon, and the kids got to help with a Calvert K-9 Search Team demonstration, running across a field and hiding from dogs, who then promptly found them.