This is what happens when there’s no afternoon nap.

It was time.  Harlan’s hair was getting in his eyes when the wind blew and during swim class after getting dunked in the water. I had a tough time losing his little baby curls and more importantly admitting it was time for another growing up milestone, but we took him for a haircut. He happily sat on Eric’s lap and ate goldfish crackers while the stylist did her work, and I don’t think he even noticed what was going on. He’s even more handsome now as a big boy.

(Backdated post. Just realized when I posted the other one from my phone that this one had only gotten saved, not posted. Oops.)

Perhaps it’s being around the older kids at daycare, but at 17 months (today!) Harlan acts like he’s ready to take on the world and then tell you all about it. He surprises me at least once a day with a new word that he’s learned and has been talking in simple sentences for several weeks. His first sentence? A basic, clear declarative- “I poop.” And indeed he did. His longest sentences are “I see [insert object here].” Breakfast on Sunday morning was delayed because it was much more interesting to stand in the cockpit and announce “I see boat!” at the regular stream of fishing vessels and pleasure craft headed out into the bay. He would then wave and say “hi” and as the boat passed us (frequently eliciting waves back from the occupants) and then say “bye” and wave until the boat headed to the jetty. And then repeat. He also has an odd obsession with shoes and hats and cannot spot our row of shoes without picking through them and identifying “Daddy’s shoes” and “Mommy’s shoes.” I recently hung them all out of reach, eliminating another favorite pastime of methodically relocating each of the shoes, one at a time, from spot to spot. He is also expressing preferences (both good and bad) like whether he wants to wear his brown shoes or his blue shoes and eat banana or oatmeal for breakfast.

He also continues to be quite confident (and/or perhaps blissfully unaware of danger). He isn’t clingy in group settings and after a couple minutes to get acclimated will run off in the direction of other children. He had a ball Saturday climbing up and down a hill in the backyard of a friend’s house whose son was having his third birthday party. Harlan may have been the littlest one out there, but he wasn’t lacking in enthusiasm as he clambered up along with the older children and started a trend of sliding down on your butt.

***Late breaking update*** As I mentioned above, Harlan has been informing us “I poop” for several weeks now, sometimes as a warning and sometimes after the fact. Last night he opted for a heads up. It took me a minute to secure supper, which I was currently cooking, so he started the process in his diaper but finished in the toilet (without any crying at being put on the toilet, which is what has happened at our previous attempts). Yay! Seriously, “yay” and clapping. I’ve never faked so much enthusiasm squatting in a bathroom and peering into a toilet before. When Mom and I looked at little toilets and seats in the store we laughed and laughed at the one advertising that it told “an inspiring story” when used and the one that played like 20 different upbeat musical tunes. But now I realize that those are for parents who don’t want to perform their own encouraging soundtrack.

Harlan spent the weekend with his parents and grandparents visiting places all kids (and adults!) should see.  We started with the United States Botanical Garden on Saturday and ended with the National Zoological Park on Sunday.  Here is a bit about our journey exploring these places.

The United States Botanical Garden, located at the east side of the National Mall near the American Indian Museum, is a large collection of plants from around the world conveniently brought together in this one location.  Harlan enjoyed looking at the plants in the jungle area but really enjoyed the kids’ garden that was in an open area within the confines of the building.  Along with a little house kids could play in was a hand pump well and watering cans that could be filled from the well and used to water the plants.  Harlan enjoyed watering the tulips that surrounded the walkways.

There was also a bamboo forest that he ran through a couple of times and a tunnel of vines that was quite entertaining.  Neither of these were as much fun as spreading water around, though.

We didn’t spend too much time exploring as we didn’t get into the city until later in the afternoon due to Harlan’s morning swim lesson.

We spent Sunday at the National Zoological Park which is located in the northern part of D.C.  Exploring this park will definitely take a few more visits as there are many animals that I’m sure Harlan would like to visit again.

We started with the sitatunga which live on the Central African continent.  They were quite lively and Harlan enjoyed watching them walk around and climb atop a termite mound.  We later saw elephants and pandas and other animals.  He was almost asleep when we got to the turtles.  These could not be missed and Harlan woke right up to watch the turtles not only nap on a nearby log but swim right next to where we were standing!  Most turtles that Harlan gets to see are way too skiddish to view this closely.  If Harlan was a bit older I believe he would have made notes and taking pictures.

After the turtles was a special treat: a ride on the Conservation Carousel which is solar-powered and exhibits over fifty endangered species that are being actively studied at the zoo.  This was Harlan’s first time on a carousel but he did a great job selecting which animal he would like to ride, a California seal, and then holding on with both hands and enjoying the trip.  I suspect this the first of many carousel rides.

After the carousel ride we made a quick trip to see the tigers and lions and then made the mile long walk back to the Metro station to take the train back to our hotel in Silver Spring.

The weather, this weekend, was great for being outdoors and Harlan dutifully spent as much time out in the sunshine playing, exploring, and generally having fun.  There will be more adventures in the coming weeks and months.

Harlan started swimming lessons this morning.  The Mommy and Me (and Daddy and Me) classes run for six weeks and meet on Saturday mornings in Bowie.  Harlan was introduced to the pool, splashed around, floated, kicked, and otherwise had fun.  Fun, that is, until the part about blowing bubbles and going under the water.  He didn’t cry but he also wasn’t very happy about the whole thing.

Here’s a little clip of him, and all the other kids, in the pool.

Harlan had his 15-month check-up last week.  He took a nap in the car on the way there and was a bit cranky at being woken up upon arrival, but overall he was a champ as usual.  As per baby union rules, he declined to show off for the doctor and demonstrate his growing vocabulary, opting instead to cling to Eric and eye the doctor warily.  Other than the VSD (he has another appointment with the cardiologist next week), he was given a clean bill of health.  He has dropped off the growth curve, weighing in at only 19 pounds, 7 ounces, but the doctor noted that wasn’t atypical given the dramatic increase in physical activity at this age.  The doctor suggested his recent nighttime difficulties might be due to his bottom molars coming in.  The doctor described the gums as bulging, so maybe there will be more teeth soon.  And perhaps after that more sleep for all of us!

On the way home from the pediatrician, we stopped to do some grocery shopping and Eric’s mom called.  Harlan, riding in the cart, took the phone and proceeded to have what seemed to be a very thoughtful conversation with her.  Holding the phone up to his ear, head tilted, and listening intently, he would pause, answer “no,” and continue listening, periodically responding again, “no.”  According to Grandma, “no” was not actually the appropriate answer to every question she asked him, but it was pretty funny to watch on Harlan’s end not knowing what they were talking about! 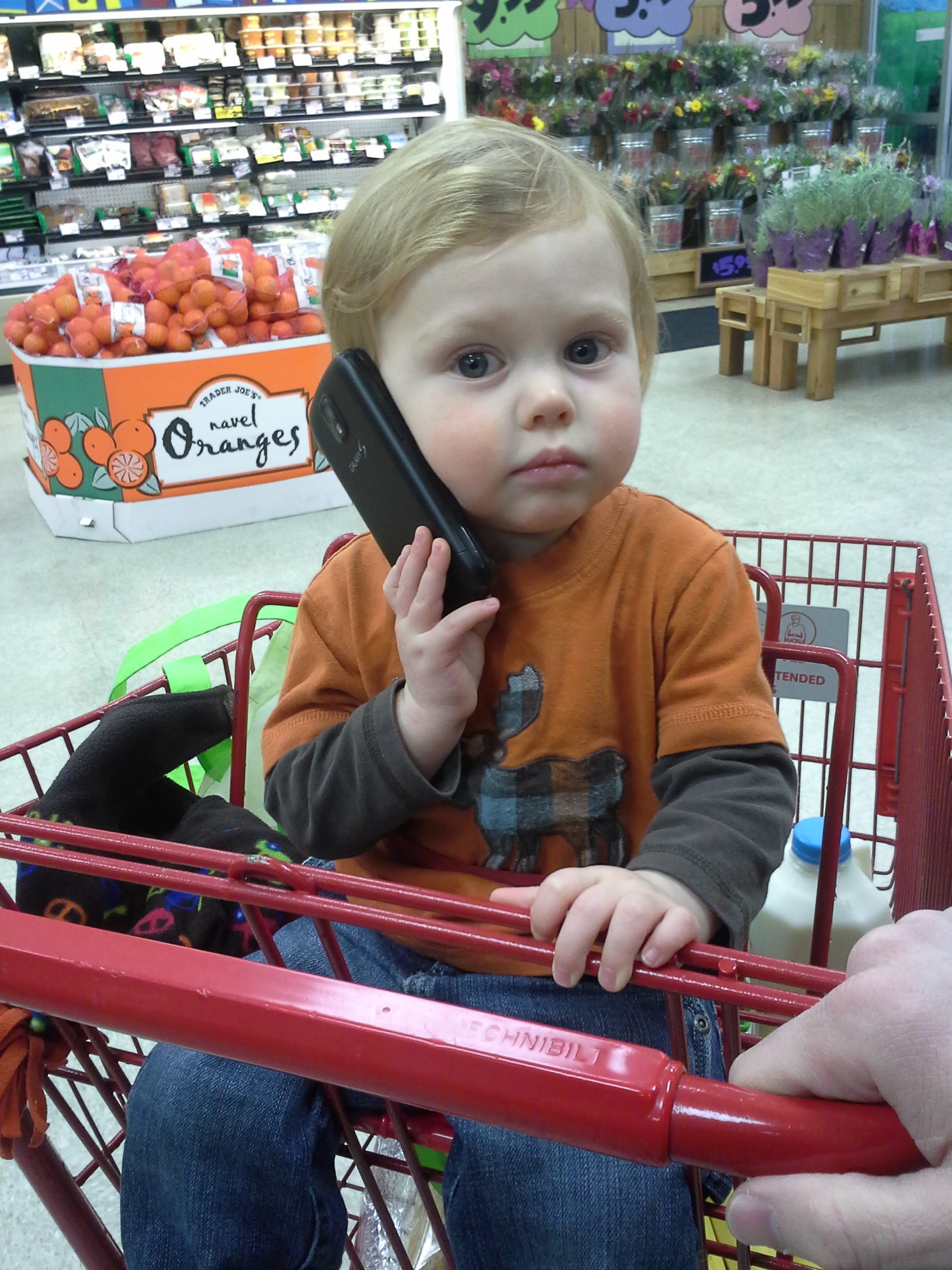 Although Harlan does still tend to revert to responding “no” to many questions, he’s also gotten very good at communicating when he wants more of something, loves identifying objects (car! car! car! car!), and is fantastic following directions.  He has started to volunteer the next letter in his ABCs book, particularly A, B, and the letters with an “e” sound.  Last weekend we stopped by a bookstore in Annapolis and bought a new book- “Moo, Baa, LaLaLa,”- and “lalala” (as in, what the three singing pigs say) has become a favorite refrain over the past week.  He learns more every day.

Harlan’s communication and comprehension skills as blossoming.  Although he answers most questions with an emphatic “No!” with little correlation to how he actually feels (or if the question even merits a “yes” or “no” answer), he also shows an ever-expanding degree of understanding.  He gamely responds to queries of “What does a cow/horse/dog/etc say” with the correct animal noise (although I wonder if he’s rolling his eyes on the inside thinking, “How many times do I have to tell these idiots that a sheep says “baa.”).  He recently learned to complete the end of the sentence “The train goes chuga chuga chuga…” with “woo woo!” (Thanks for all the practice over Christmas, Grandad!).

He’s also following basic instructions.  Put on Daddy’s shoes, hat, etc.  Pick up such and such.  Hug George the monkey.  He knows his own socks and shoes go on his feet and tries to put them on.  He can also sort of get on his own bib and hat.  He obediently will pick up and take any object to a directed person as well, which is a wonderful distraction when you need to get him to stop doing whatever he’s doing and keep him busy for a minute.  Harlan, take Daddy the brush.  Harlan, go give the brush back to Mommy.  The other day he dropped a piece of chicken on the floor when he was done eating, which I scolded him for doing.  Then I wiped his face and put him down on the floor to play.  A second later I felt a little hand in my lap depositing the half chewed piece of chicken on my leg.  Thanks pal.

He also has figured out that he can ask us to do things too.  Last Sunday I laid down with him for a nap.  He woke up first and started jabbing my closed eyelids.  “Eyes!  Eyes!” he demanded.  When I managed to groggily open my eyes and sit up he began pointing at the closed bedroom door.  “Door! Door!” he ordered.  Yep, time to get up and go play.  And when Harlan is ready to go, he’s ready to go.  “Door” is becoming a frequent demand.  When Eric picked him up from daycare Thursday he was ready to go.  He shouted “Da Da” and put his arms into the air to be picked up.  When Eric obliged he pointed at his bag- “Bag,” he ordered.  The he pointed at his coat.  “Coat,” he demanded.  Finally, “Door!.”  Time to go home.