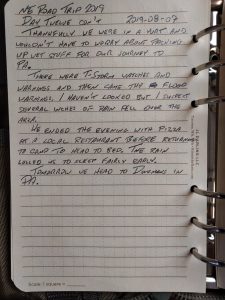 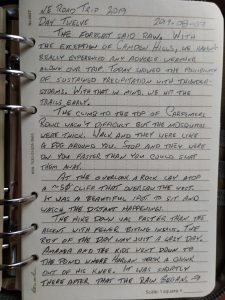 The forecast said rain.  With the exception of Camden Hills we haven’t really experienced any adverse weather along our trip.  Today showed the possibility of sustained precipitation with thunderstorms.  With that in mind, we hit the trails early.

The climb to the top of Carpenters Rocks wasn’t difficult but the mosquitoes were thick.  Walk and they were like a fog around you.  Stop and they were on you faster than you could swat them away.

At the overlook, a rock lay atop a ~50-foot cliff that overlooked the west.  It was a beautiful spot to sit and watch the distant happenings.

The hike down was faster than the ascent with fewer biting insects.  The rest of the day was just a lazy day.  Amanda and the kids went down to the pond where Harlan took a chunk out of his knee.  It was shortly thereafter that the rain began.  Thankfully we were in a yurt and wouldn’t have to worry about packing up wet stuff for our journey to Pennsylvania.

There were thunderstorm watches and warning and then came the flood warnings.  I haven’t looked but I suspect several inches of rain fell over the area.

We ended the evening with pizza at a local restaurant before returning to camp to head to bed.  The rain lulled us to sleep fairly early.  Tomorrow we head to Dingmans in Pennsylvania. 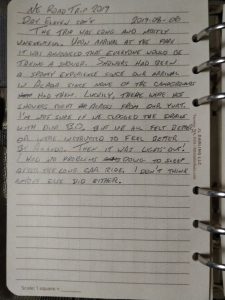 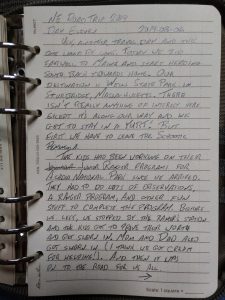 Ugh, another travel day and this one would be long.  Today we bid farewell to Maine and start heading south back towards home.  Our destination is Wells State Parks in Sturbridge, Massachusetts.  There isn’t really anything of interest here except it’s along our way and we get to stay in a yurt!  But first we have to leave the Schootic Peninsula.

The kids had been working on their Junior Ranger programs for Acadia National Park since we arrived.  They had to do lots of observations, a ranger program, and other fun stuff to complete the program.  Before we left, we stopped by the ranger’s station and the kids got to prove their worth and get sworn in.  Mom and Dad also got sworn in (I think we got credit for helping!).  And then it was on to the road for us all.

The trip was long and mostly uneventful.  Upon arrival at the park it was announced that everyone would be taking a shower.  Showers had been a spotty experience since our arrival in Acadia since none of the campgrounds had them.  Luckily, there were hot showers right across from our yurt.  I’m not sure if we clogged the drains with our B.O. but we all felt better, or were instructed to feel better, by Amanda, post shower.  Then it was lights-out!  I had no problems going to sleep after the long car ride.  I don’t think anyone else did either.

Tomorrow starts our New England Road Trip 2019. A few years ago, Amanda and I made a similar trip up to Maine, camping along the way, and we felt it was time to do it again. I’m not sure I’m looking forward to the driving and all the activities, but I’m hoping that the lack of a schedule will do me some good.

If you want to follow along on our adventure, feel free to use the “Subscribe to Blog via Email” feature on the right hand side of the screen or use your favorite RSS reader. All posts will be in the NE Road Trip 2019 category.

I just had to add to Amanda’s post.  Provincetown really struck me as a wonderful place.  The park ranger compared its Commerce Street to Key West and boy were there a bunch of characters!  Everyone we came into contact with was extremely friendly.  The town really is bike friendly as well.

If you stand at the water’s edge and look west (towards Cape Cod Bay) you will think you are in the Bahamas or the Virgin Islands. 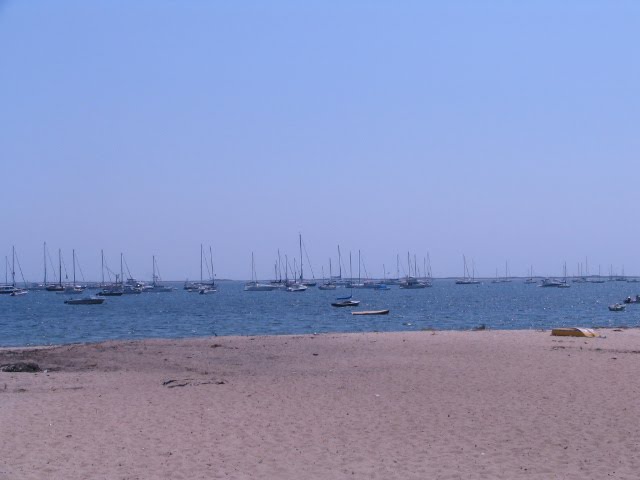 However, standing at the same location, turn 180-degrees in the other direction and you will see many Cape Cod-style homes and buildings reminding  you where you really are.  Fantastic! 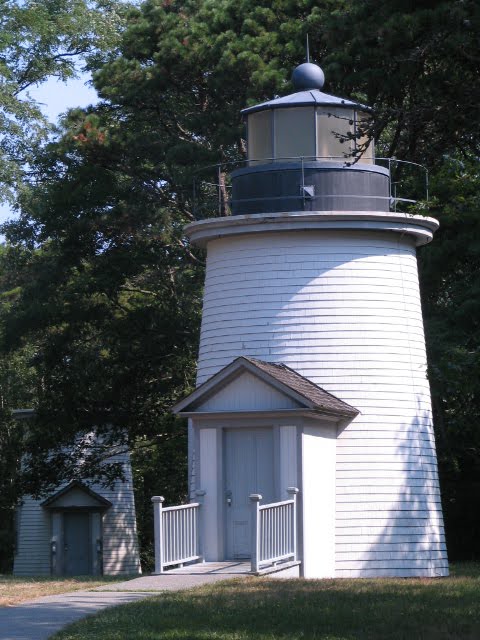 It was a gorgeous day with gorgeous views as we headed up the Cape today (or “around the comma” as Eric has taken to referring to it). From Nickerson State Park where we’re staying it was a short drive to the Salt Pond Visitor Center where a very helpful park ranger gave us maps and suggestions on what to see and do. We started by racking up four lighthouses in one stop. First were the Three Sisters Lighthouses, which are no longer operational. Then we walked just down the path to Nauset Light. Heading further up we stopped by the Highland Light, also known as the Cape Cod light. Although the lighthouse is open for tours for $4 we decided to skip climbing the stairs and walked down to the nearby overlook instead. Wow, what a view! I’m not used to seeing the ocean from up above rather than from beach level. As instructed by the danger signs we stayed away from the edge of the sandy cliff that looked like it could easily give way and marveled at the pretty blue water and how small the boats looked out in the ocean.

From Highland Light we headed around the Cape to Provincetown. We parked outside of the downtown area just down from the National Park’s Province Lands Visitor Center at a picnic area and biked into town. Great decision. In town was hectic with lots of cars and even more people on foot or on bike. We joined the mayhem, feeling a little like we were in training to be New York City bike messengers, dodging cars and pedestrians. We split a chicken parm at George’s where the bartender cheerily agreed to fill Eric’s water bottle on our way out. Our final lighthouse of the day was Wood End Light which is accessible by walking along more than a mile of a rock breakwater/jetty/dike. It took 9.1 miles round trip on bike and foot, but we found a nearly deserted beach on the other side facing Provincetown Harbor. We opted not to trek the extra couple miles down to Long Point Light which is right at the tip of the Cape given the difficulty walking in the soft sand. By our count looking at the map, there are eight lighthouses along the Cape, so we at least spotted most of them. 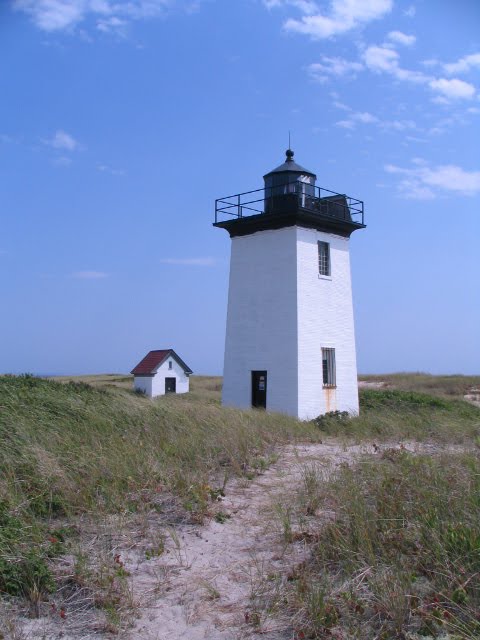 Now we’re back at the state park in our second campsite in as many nights. When we booked the campsite reservations the park was sold out except for two separate sites, one on each day. So this morning we took down the tent, shoved the still inflated sleeping pads into the car obscuring whatever visibility might have been left in the back window and drove down the road to our second campsite. Unfortunately our second site has zero privacy, and even worse we discovered after walking to all three bathrooms in the area- no showers! So we’re headed to get ice cream now but after that we’re going to go crash our old camping area and see if we can sneak into one of the two showers there. I should add that while I’ve been typing I’ve determined what our current camping area lacks in showers it well makes up for in drama. There is a young man, who I believe did not take note of the “no alcohol” rule, and is unhappily being dumped by his girlfriend.

Tomorrow we’re headed to Maine, which is great because I can spell it, unlike Mass.

Last night we stayed at a very nice campground in Sandwich, Massachusetts. Unfortunately as busy as it is down here we couldn’t stay the entire three nights that we had planned to be in this area and had to move to Brewster, MA to another state campground.

We decided, after packing up camp once again, to go into the town of Sandwich and have breakfast. We found a nice little restaurant called the Bean and the Bagel. Wow, what a great place! Everyone was so nice and the food was quite good. After eating we took a stroll around the small town and poked around a couple of stores. You could walk everywhere you wanted to go and didn’t have to worry about getting run over. Just a nice, small town. 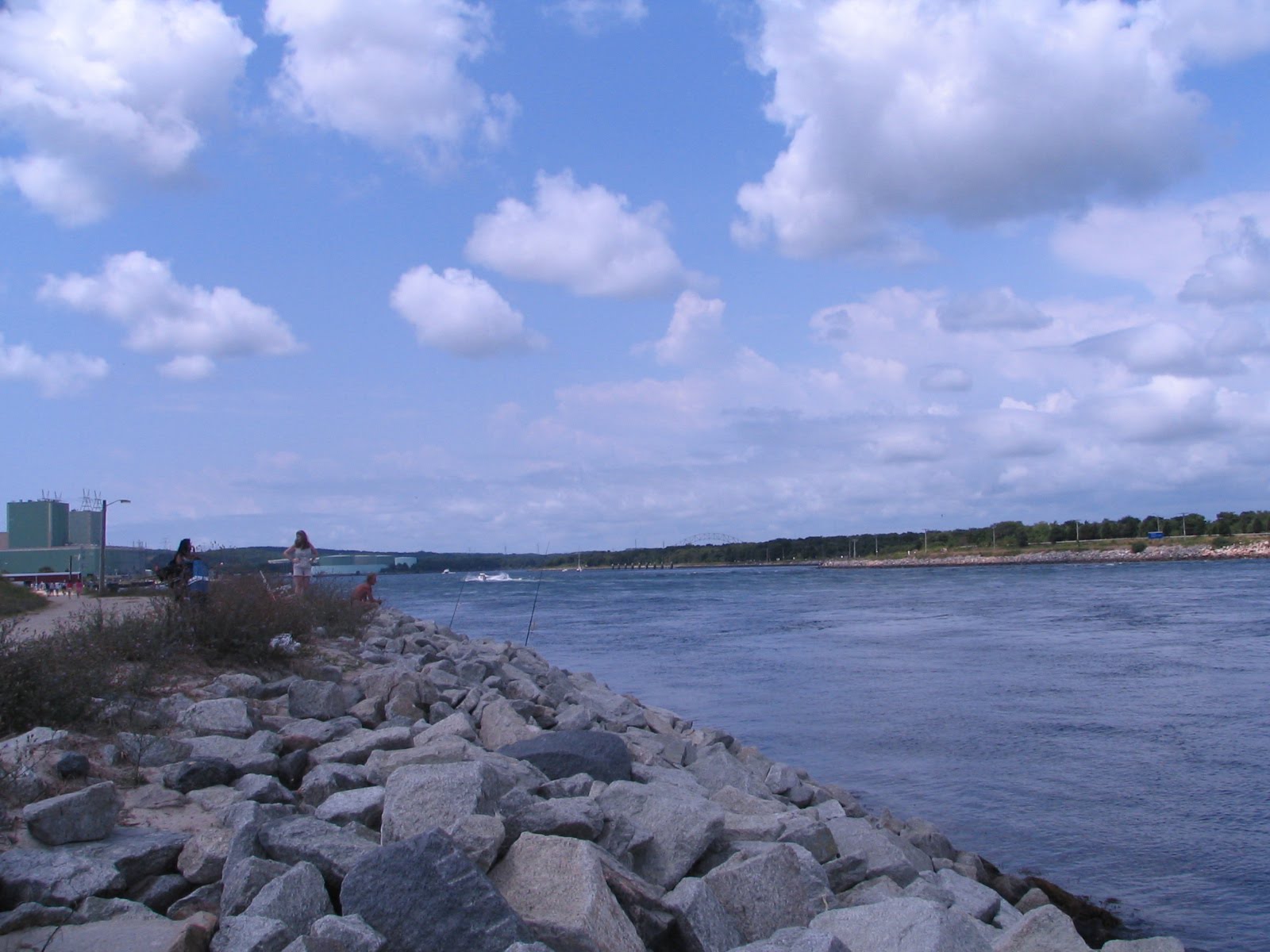 After breakfast we went to the Cape Cod Canal Visitors Center. The Cape Cod Canal is part of the Intracoastal Waterway and is managed by the US Army Corps of Engineers. There were some neat exhibits inside but Amanda found a self-guided bicycle tour map for the canal. Along both sides of the canal is a walking and biking trail. We rode from the Sandcatcher Recreation Area, past the Sagamore Bridge, to the Bourne Bridge and its recreation area. At that particular recreation area we found quite a bit of recreating going on. There were… well… old people, everywhere. They had lawn chairs and books and they were enjoying the day watching the boats go by. We ended up riding twelve miles, round-trip.

After the daily exercise routine, we packed back into the car and headed east to Brewster. Nickerson State Park is just off the main drag and runs up the Cape. It’s nice enough and doesn’t crowd you together with everyone else but I’m still ranking New Jersey’s campgrounds higher.

Tomorrow we venture up the Cape to see as many lighthouses as we can. Tuesday it’s on to Maine.

Last night was supposed to get pretty chilly (low to mid 50s) but the sky was clear and I wanted to try out our new hammock. With mummy-sleeping bag in hand I made my bed about five feet off the ground. 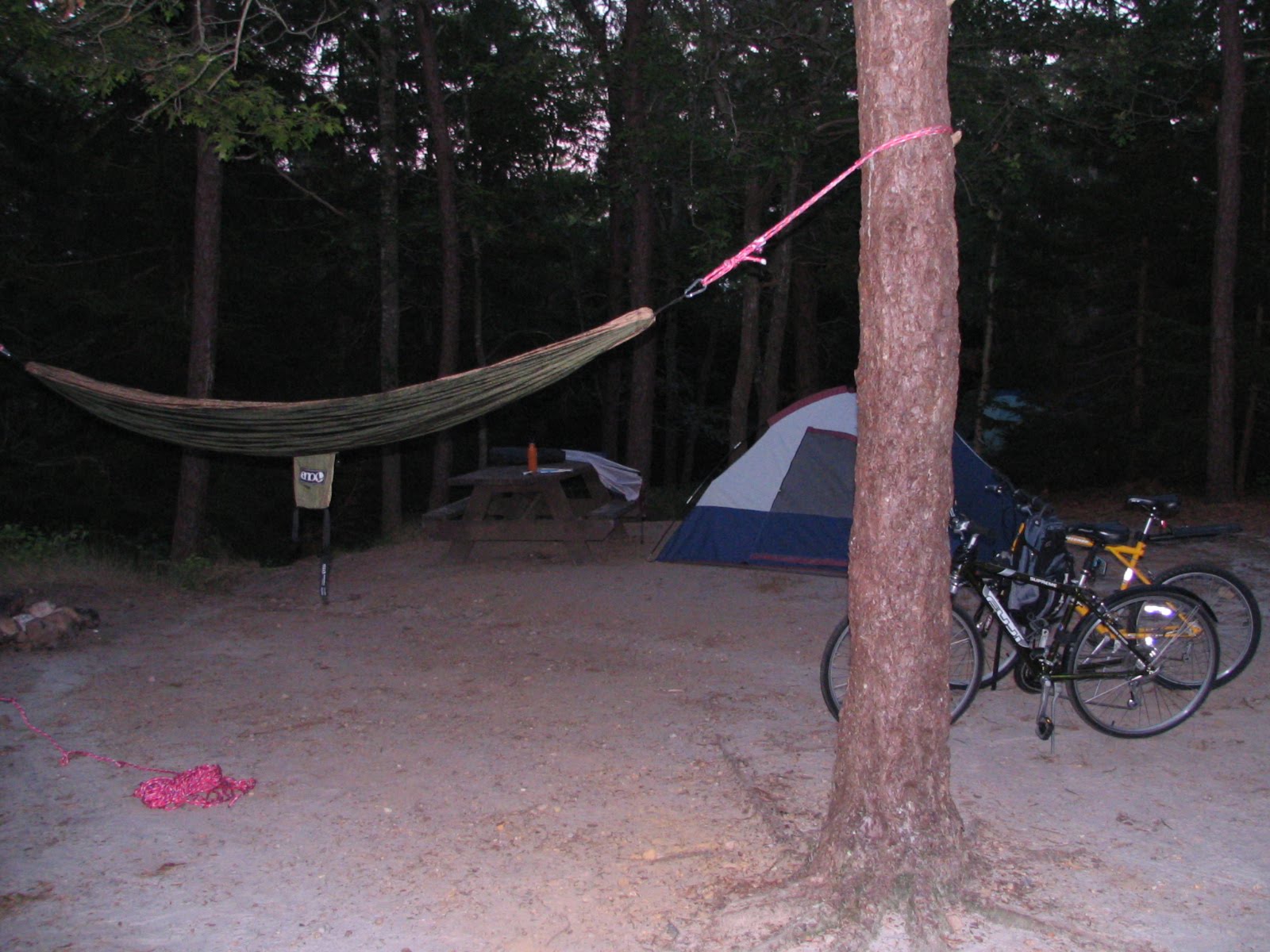 Let me tell you, sleeping in that hammock was like sleeping in a cloud. It did get a bit chilly in the middle of the night but I just zipped up the bag a bit more and hunkered down. Overall it was a great night’s sleep and maybe Amanda will let me do it again.