We snuck in a trip to NC before the kids started summer camp. They were excited to discover that Grandma’s blueberry bushes had ripe blueberries unlike our ones at home. They enjoyed picking (and eating) the berries, running through the sprinkler, digging in the mud, and otherwise running around the yard.

We also got lucky enough to have a nice visit in Greenville with Carolyn, Uncle Ben, and Cousin Tilly. Afterward we had lunch with John and his girls and then they took us to what they call the “zip line playground.”

Elise has gotten over her fear of the Easter Bunny, which was good because we saw him two days in a row this year. Saturday he was at the swimming pool where we were for the 4th birthday party of one of Elise’s friends. 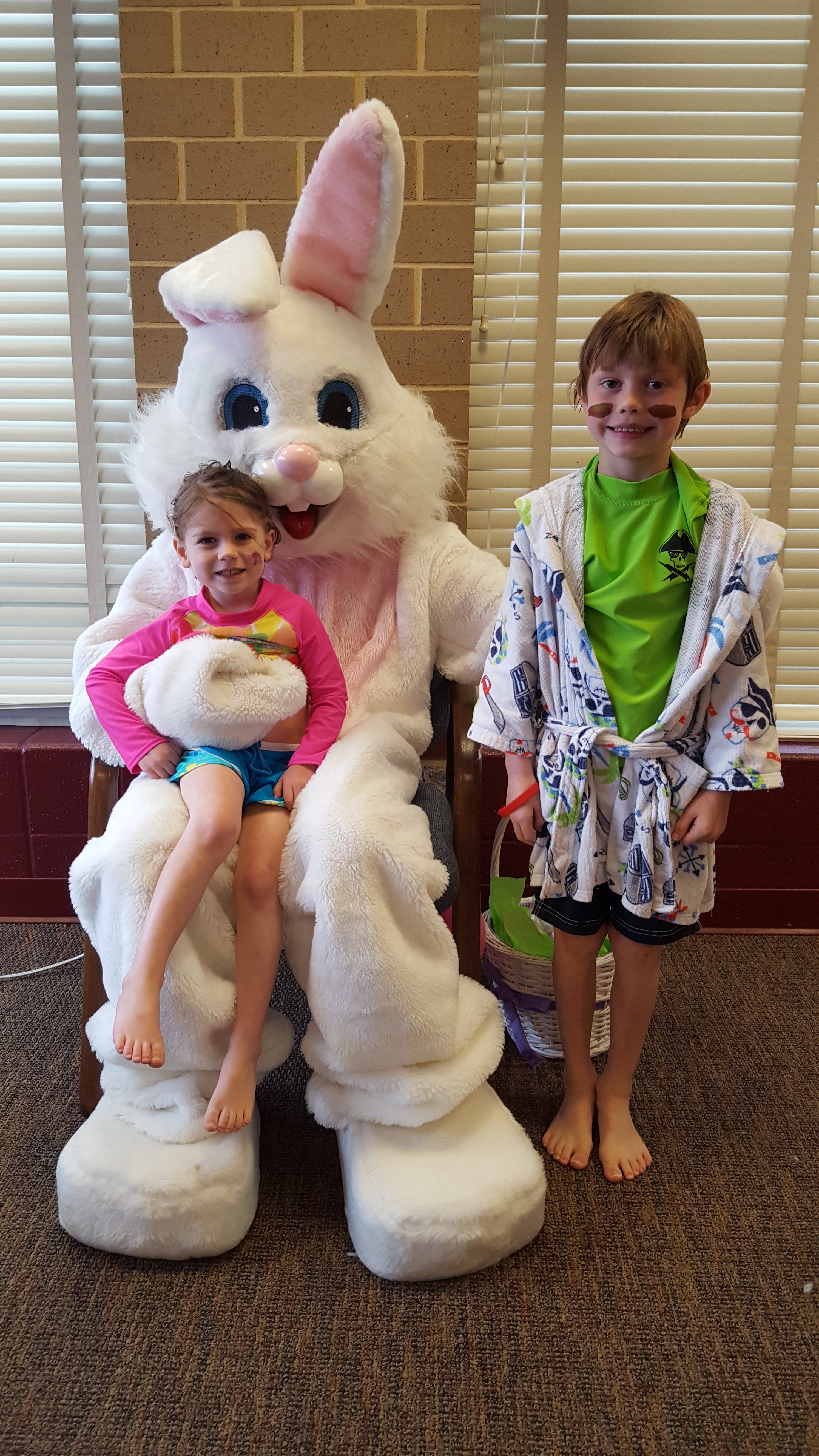 Then Sunday was the neighborhood Easter Egg Hunt.

In addition to the egg hunt, there were games. First was the donut on a string eating contest. Elise gave up pretty quickly, deciding it was a ridiculously difficult way to score a pastry, and happily devouring it once she was allowed to pull it off the string. Harlan stuck with it, but never quite figured out a good technique.

Next up was the egg toss. Elise opted out of that one, although I did come prepared with spare clothes and wet wipes after watching it last year. Harlan partnered up with an older boy he knows from the school bus and they almost won! Harlan has never shown much natural talent for throwing and catching, but they were a good team. 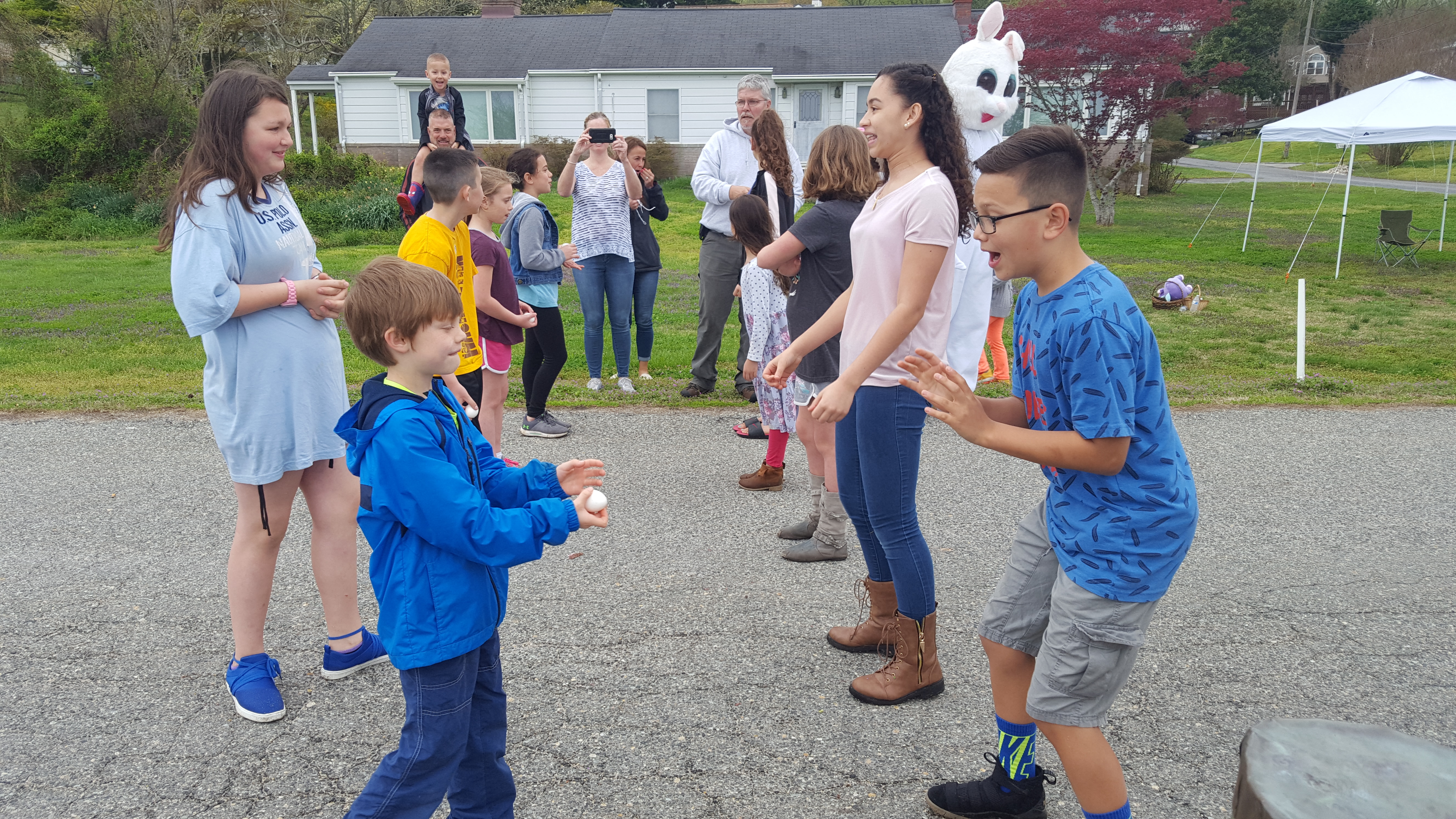 Finally it was time for the egg on a spoon race. Elise made it down and almost halfway back but then looked up to find where I was and dropped her egg. Harlan was laser focused on his egg. Other kids were ahead of him, but he stayed steady, and all the front runners dropped their eggs so he cruised to victory. I wish he’d show that kind of focus all the time!

It was a grandparent Thanksgiving this year with both my parents and Eric’s mom (and her dog, Cash) all joining us. Apparently after dropping off Elise at preschool the day after Grandma arrived, she went up to her teacher and announced happily, “Grandma came to visit and she brought cash!!” With some followup questions her teacher figured out Cash was the name of Grandma’s dog, but she was amused at her initial impression of grandma walking in with a wad of bills. Kathy and I joined Elise’s class for their school Thanksgiving celebration. Elise was a cute little turkey. As for our own Thanksgiving feast, we got the turkey mostly defrosted this year before the big day, and turned out a counter-full of side dishes. Yum!

Since we’re now (more than) halfway through the summer, I’m going to do a summer compilation roundup here and then post-date a couple earlier posts on specific events.

So first, this happened:

On his fourth quarter report card, his teacher wrote: “Harlan continues to excel and show great potential in the classroom. His accuracy when reading is at 98% according to the Oral Reading Assessment. He tested above average on the Numeracy Assessment, and he really shows talent in the Science, Technology, Engineering, and Math area. Please continue to speak with Harlan about slowing down to review his work when he completes it in order to prevent simple mistakes, and thinking about his actions before he acts.”

School has long been forgotten now though. Every time we drive by the building I remind him that he will be going back, but three months is a long time when you’re six. He has adapted easily to summer. He quickly took advantage of getting to stay up later (Moooom, the sun is still up, I should be too!), and we’ve kept busy with a variety of activities.

Elise has had a harder time with summer. She was used to Harlan already being at school when she woke up (or maybe waking up just in time to walk him to the bus stop), and having him going to the daycare facility with her seemed to throw her off. Or maybe it was losing most of her class who moved up into the 3-4 year old room at the start of summer. And also perhaps that Eric has been out of town a fair bit this summer, which has thrown off her usual routine of morning daddy snuggles. For the first time in her life she was clingy at drop off… for a month. It was tough and unexpected when we signed Harlan up for summer camp in the youth center next door to the preschool center. He has enjoyed seeing old friends and has happily headed off each morning while she’s been the reluctant one (a reversal from their usual roles). They have had some fun dress up days at camp (most of which I have not photographed because it’s hard enough just to get them out the door, let alone record visual evidence):

Of course we’ve also spent some time down at the beach. Elise is completely fearless in the water, which is nerve wracking for me, but she has a great time. There aren’t as many pictures as last year because I spend my time expecting at any second to have to jump in and yank her out from under the water. Even when she does go under she’s completely nonplussed though. I don’t even want to think about how much of the bay she has consumed.

Both kids have also been taking swim classes. It’s a slow-moving class at the rec center, which is just fine with Harlan, who is perfectly happy never to put his head in the water. Elise can’t take classes on her own until she’s 3, so she’s in the parent/child class. Unlike Harlan, she is thrilled to hurl herself into the pool, and on the first day entirely unprompted was doing a pretty good doggy paddle.

Nana recently came for a visit, which was nice since Eric unexpectedly had to go down to NC. Luckily, Eric and I did manage to go see Wait, Wait, Don’t Tell Me at Wolftrap before he left. It was a wonderful experience and really interesting to see the whole show and then listen to what got cut out on the radio. James Comey was the guest for Not My Job, which got a good rise out of the crowd. Nana was also kind enough to babysit during what I will call “the day of many screams,” so I could go to a baby shower lunch for a friend. Other than that one day during which both kids were, from the time they woke up until the time they went to bed, complete, illogical, very vocal terrors (particularly my usually good-natured Elise) we had a fantastic visit. Nana and I even got a chance to go into D.C. (without the little terrors) to hit a few of the more off-the-beaten-path museum stops.

After being kept inside by torrential rain Saturday, we were happy to get out the house on Sunday and go down to the beach.

Harlan participated in the neighborhood Independence Day parade again this year- luckily via his own power. Last year, I pulled both kids in the wagon and declared never again on that! The “parade route” starts on a relatively flat block (slightly downhill even), makes a right down another relatively flat block, runs along the beach for another flat block, then makes a right hand turn for a decidedly uphill block. That’s the stretch that just about did me in pulling the wagon in the heat last year. This year wasn’t any cooler, but Harlan decorated and pedaled the new pedal car. (I jogged along behind and provided an extra push on the uphill part.) He was the only human-powered vehicle in the parade! Last year there were some kids on bikes, but this year it was all vehicles, golf carts, mopeds, motorcycles, and kids in battery-powered cars. He kept up just fine though. Eric and Elise joined the spectators along the beach, and then we all enjoyed the potluck picnic afterward.

Our garden is growing! We started small this year since we hadn’t really planned things out. Corn in the back, tomatoes and beans in the middle, and chilies up front.

School is almost out for the year. Both kids have had end-of-year performances/celebrations recently. Last week the kindergartners put on a musical performance for the parents.

He has had a very patient teacher this year who has done her best wrangling 26 kids and getting them all ready for what lies ahead. Harlan has proven to be a fast learner as well as a frequent talker and mover (not always at appropriate times). He grumbles and reading and writing homework but loves math. He quickly got bored with adding and subtracting single digits and moved right along to larger numbers and then multiplying and dividing on scrap paper in his free time (after he answered a question during class with an explanation of negative numbers, his teacher asked him to stick with the basics during class time so as not to confuse his classmates).

I just realized I never posted his third quarter report card blog post that I started to write, so here’s that info too… Harlan has continued his mastery streak into the third quarter with the exception of music class (he reports that he does not sing in class, which I don’t understand because he belts the songs out at home) and that pesky matter of following directions/rules, staying on task, and demonstrating self-control. His teacher wrote the following about him: “Harlan reads and writes fluently, and he comprehends texts that he reads. He is full of ideas, and excited to share his knowledge with his peers and his teachers throughout the day. Harlan solves math word problems well and shares his explanations clearly with other students. He makes mistakes at times due to his lack of attention, and urgency to finish activities. We remind him to slow down, and take pride in his work because he is an amazing student.”

Elise’s daycare also recently did a graduation ceremony. Each class sang a song they had been practicing. They were so adorable! Elise’s class did “The Ants Go Marching.”

They also all put on robes and got to walk across the stage and get a diploma. I’m not sure if Elise will actually be moving into a different room yet since she’s one of the youngest in the class. I think she’ll be happy either way. She’s a very social little girl, always ready to try something new, and knows how to charm any grownup. 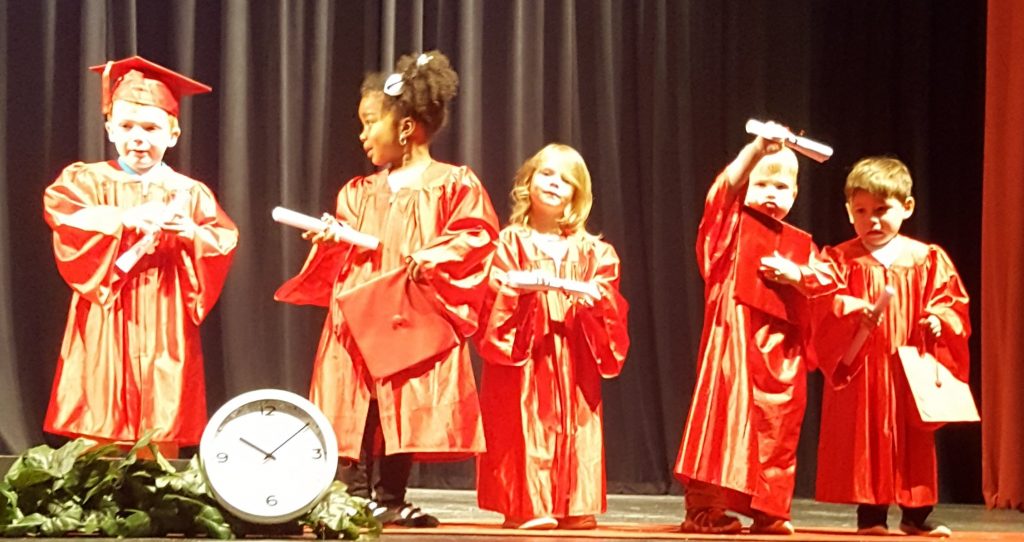 Nana and Papa came for a recent visit, and once again I failed to get a nice group shot, but I did get a few pictures of them with the kids.

I think Elise may have them wrapped around her little finger…