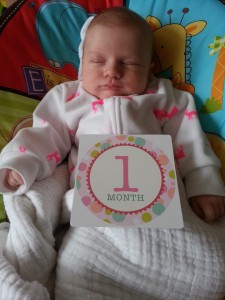 I had every intention of actually sticking the sticker on her and getting a photo when she was awake but it just didn’t happen. At least I’ve got 11 more chances…

Another late post, but what can I say- we’ve been busy. More importantly, we all got what we wanted for Christmas. Or at least I did- a nap. That’s right- both Harlan, who has been boycotting naps, and Elise decided to go down at the same time. It’s a Christmas miracle! In fact, they did it two days in a row- on Christmas Eve and Christmas Day. Now that’s better than any present you can buy in the store!

As you might expect, Elise actually slept through most of Christmas Day, completely unaware of the holiday.

Harlan didn’t wake up early but did immediately head downstairs upon awakening to see if Santa had arrived. He then returned upstairs to inform us that he had and had left lots of presents and eaten the pear we left him (because we wanted Santa to eat healthy and frankly did not have time to bake or even buy cookies). He excitedly but patiently waited for me to feed Elise and come downstairs before tearing into his presents… well, except for one, but how much restraint can you expect. 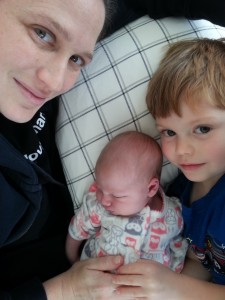 Mommy and her sweet little ones. Elise is already growing. She weighed in at 7 lbs, 9 oz today at the pediatrician, so she has already surpassed her birth weight. 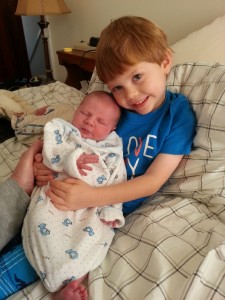 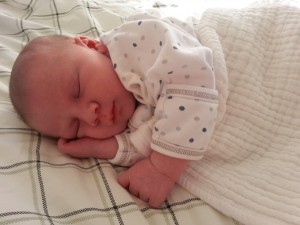 Just couldn’t wait. Enjoying life so far. Such a good little sleeper… during the day.