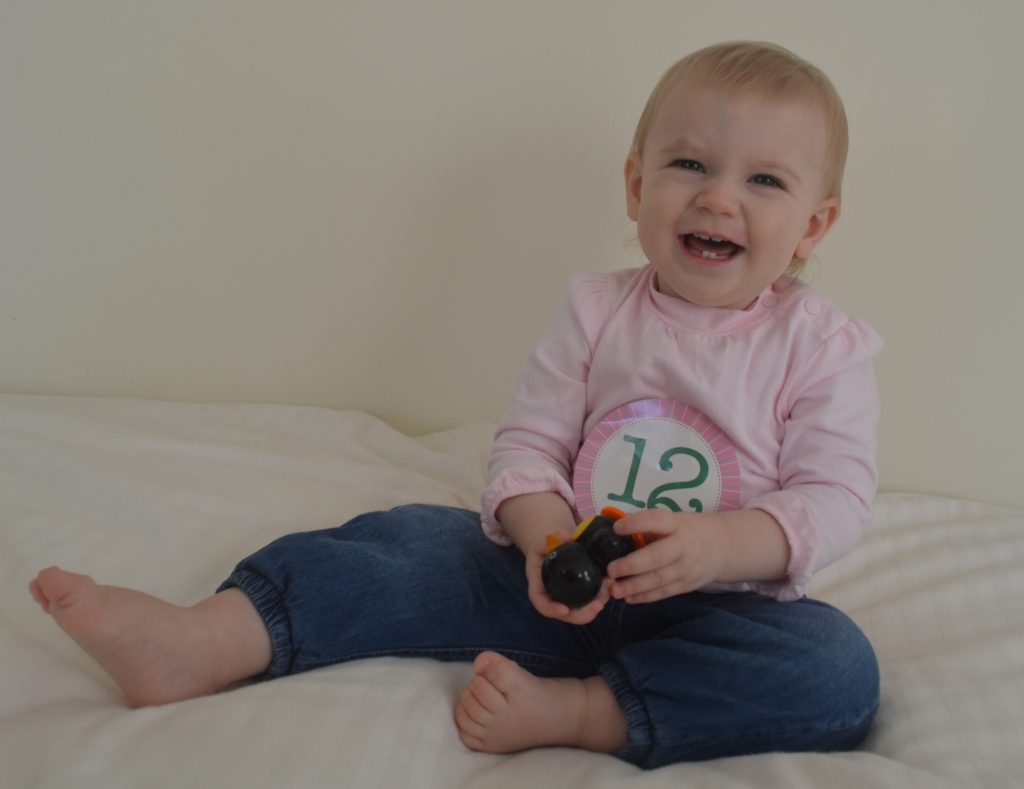 Wow- it’s been a year already! Elise continues to be a wonderful, happy baby. Despite having really no idea it was her birthday, I think she had a good day. In honor of the occasion she took her first series of unassisted steps into her Papa’s arms. She plopped on her butt a few times but overall looked very proud of herself and joined in our applause of the feat. 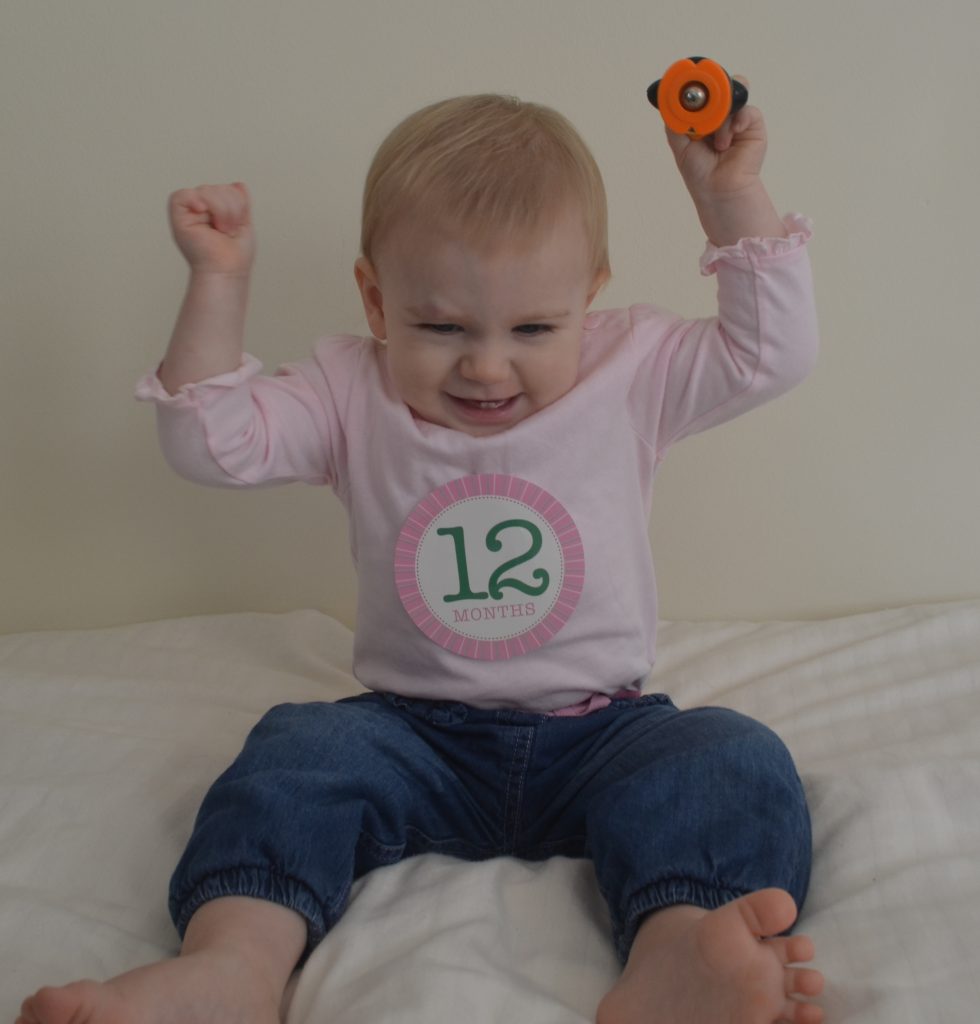 She’s already quite the proficient stair climber and in general an adventurous soul, so she’s keeping us on our toes the more mobile she gets. She doesn’t stay still for long, that’s for sure. She’s always on the move, looking for a laundry basket she can empty out (especially if it’s clean, folded laundry that can be deposited on the floor) or a paper to crumple (the more important the better).

She’s enjoying a variety of finger foods at this point, both actually consuming them as well as dropping them on the floor. She’s also moved into using a cup rather than a bottle at daycare. 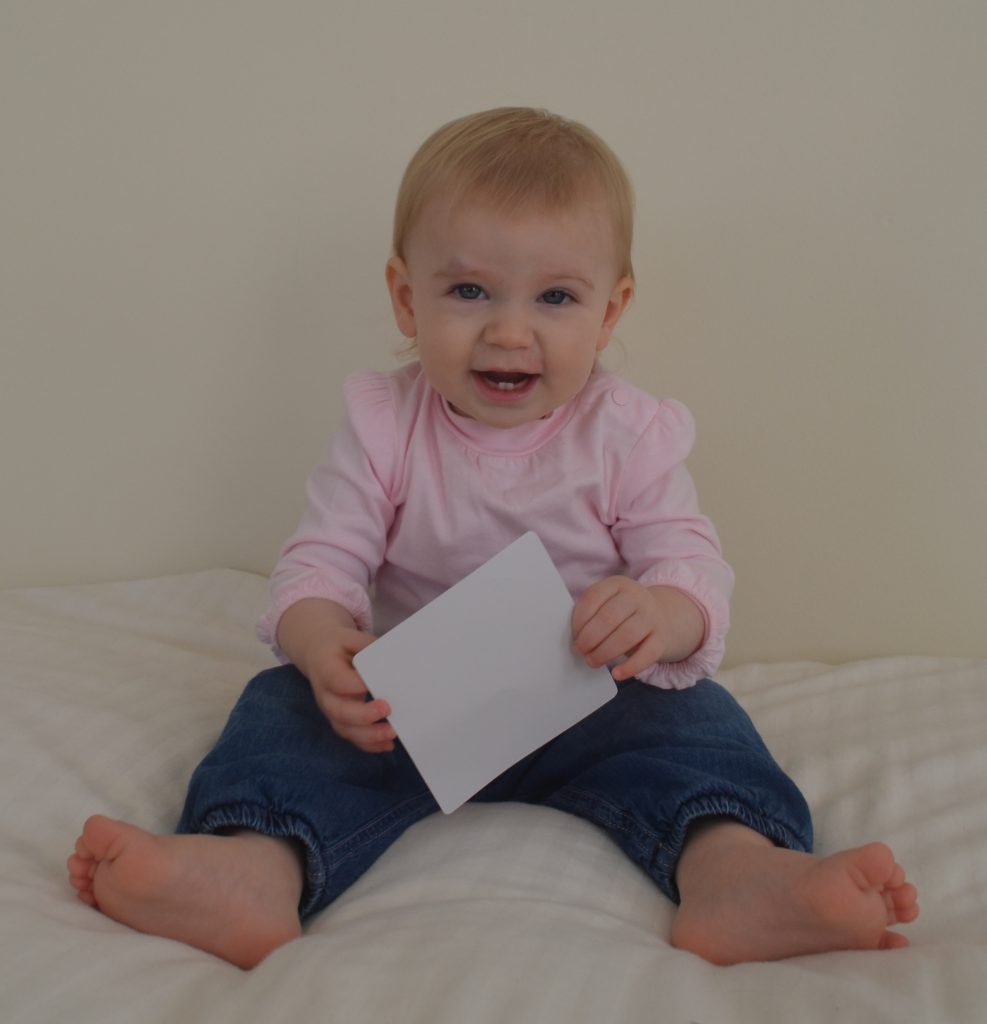 She’s getting big too. She made a notable jump in height over the past several months. At her 12-month checkup she was 29.5 inches long, which puts her up in the 60th percentile. (She was in the 20th percentile at her 9 month appointment- maybe that’s why I feel like I barely had time to switch out the clothes in her drawer before she had outgrown them!) Her weight stayed along her same growth curve. At 18 pounds, 4 ounces, she was in the 25th percentile. And the all-important head circumference stayed in the 25th percentile at 44 centimeters. She was, as usual, very well-behaved at her appointment, if not a bit wiggly and intent on exploring the exam room during all the talking. 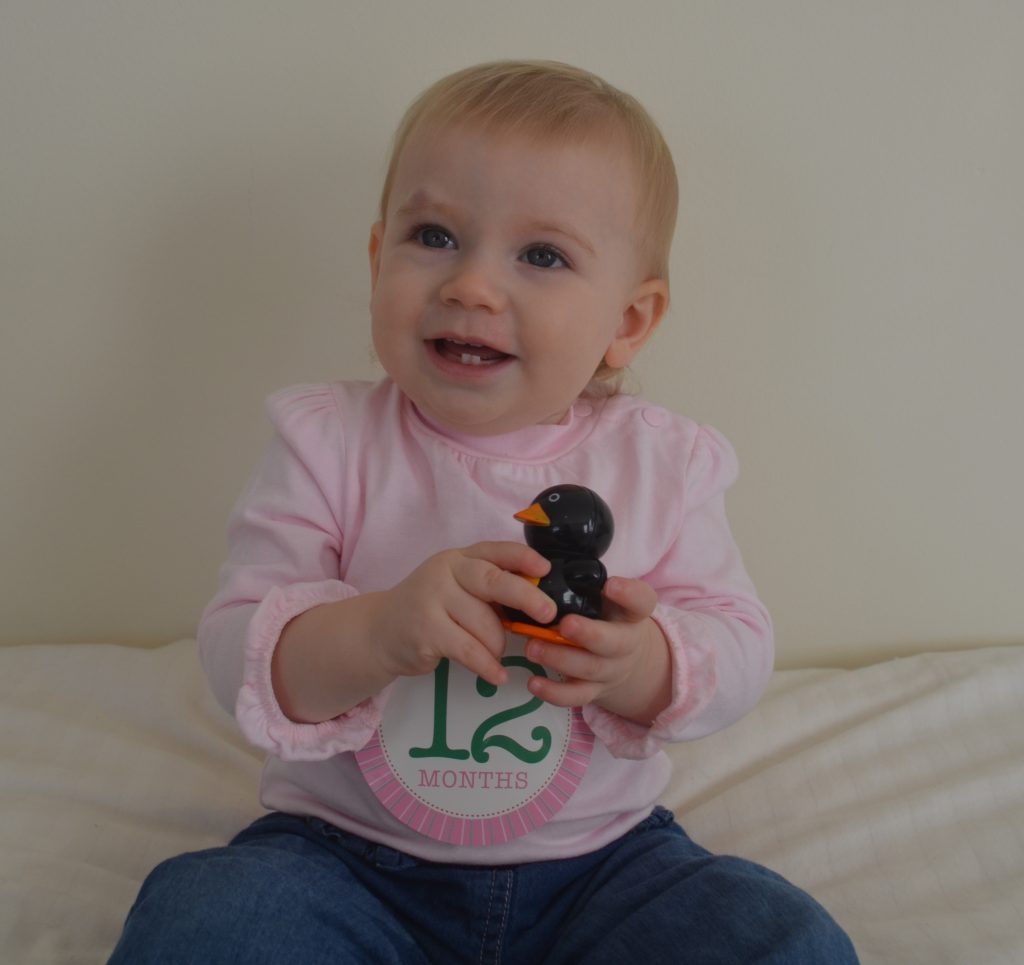 She and Harlan continue to share a special bond. They both just light up when they see each other and love to snuggle first thing in the morning. Although at first glance he seems a bit physical with her, pulling her along and wrestling with her, he is very protective of her. She lights up when she sees him. He’s been creative in including her in his games, pretending her crib is a pirate ship and they are pirates or pushing her around in a laundry basket “train.” She’s just starting to take apart his block towers or otherwise interfere with his playing, but he’s been reasonable patient. She’s luckily easily distracted by anything that shakes. A plastic Easter egg filled with rice is thrilling.

Elise also gives the best… and I do mean absolutely the best, most wonderful, loving… hugs. She wraps her little arms around your neck and will just squeeze. Or she’ll take your face between her chubby little hands, smile, and lean in like she could just eat you up. Such cuteness. In addition to people, no stuffed animal is spared. If she can get it in her arms, it’s getting a hug. Frankly, nobody around here is objecting. 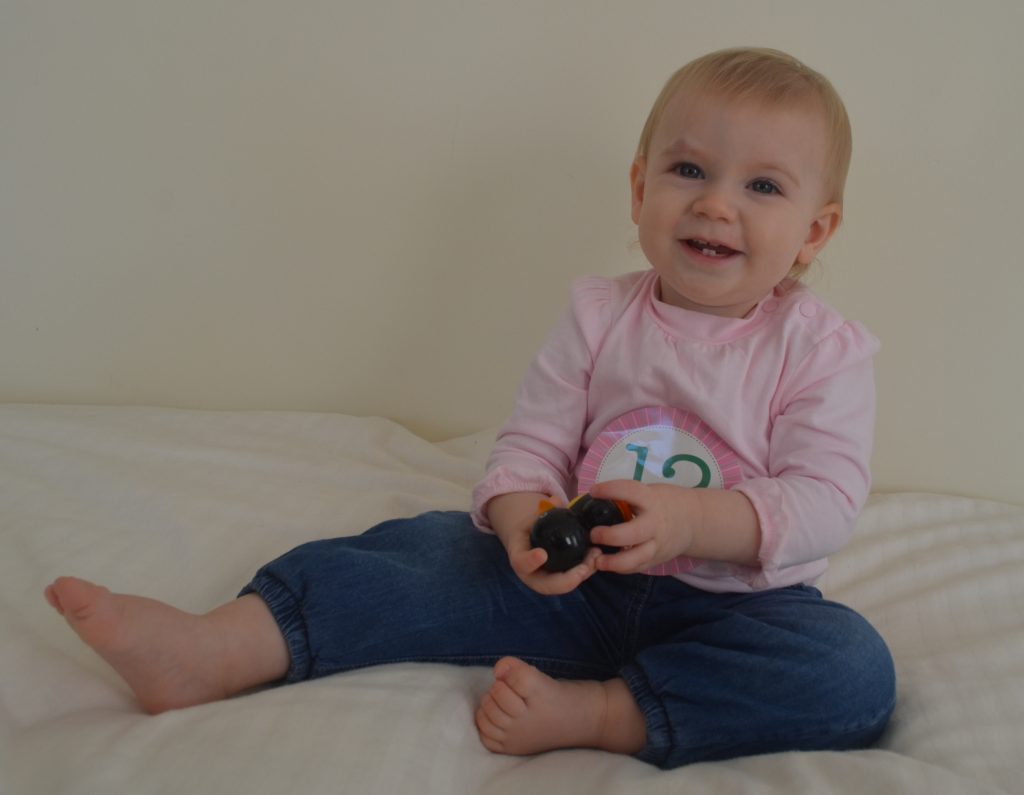 I can’t draw any comparisons to last year for obvious reasons, but our now family of four had a wonderful holiday this year. Once again we decided to delay our official big Thanksgiving meal again, but this time it was a planned delay until my parents are in town rather than Elise’s unexpected arrival.

Instead of cooking all day we heated up a couple pre-prepared sides (thanks Trader Joe’s) and some pre-cooked turkey breast  (thanks again Trader Joe’s), I made a sweet potato casserole, Eric made mashed potatoes, and we opened a jar of cranberry sauce (seriously, we love you Trader Joe’s) and we called it a meal. It was delicious and low stress. That freed up time for Eric to wash all the laundry that had been piling up, which I at least was very thankful for. Most importantly we all got to spend the time together. Even the weather cooperated and we enjoyed a nice family hike at the nearby land trust. Even wiggly Elise who always wants to get down and go seemed to enjoy riding around on my back watching the leaves in the breeze. Harlan got to break in his new hiking pack. It was just a wonderful family day. For that I am more thankful than words can express.

We went to two farm fall festivals this year. First on September 25: 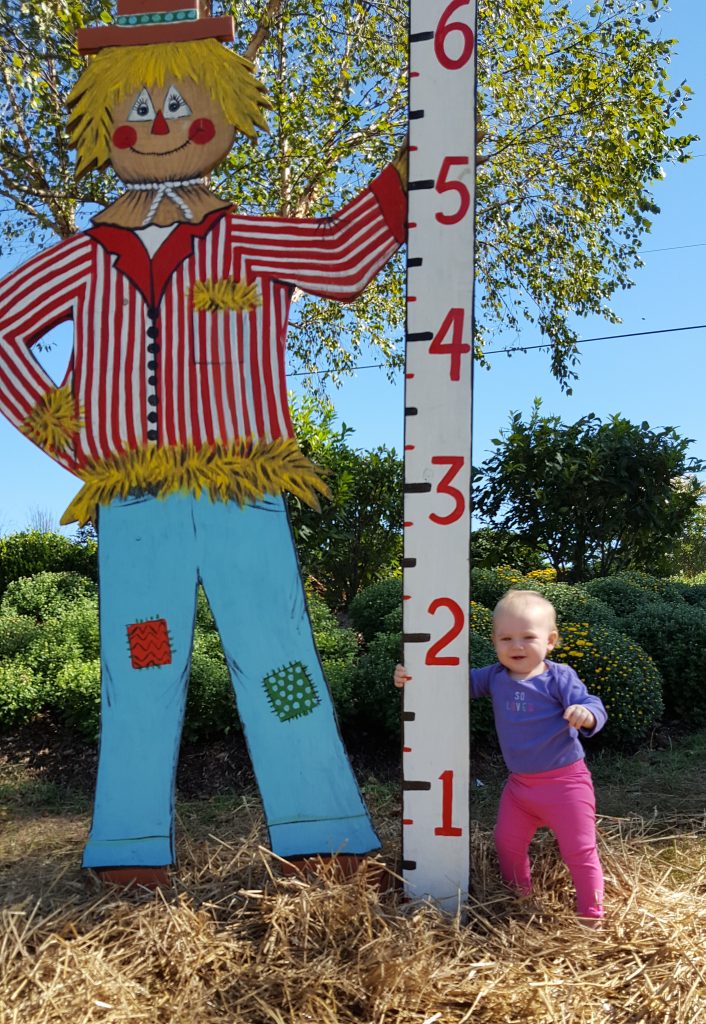 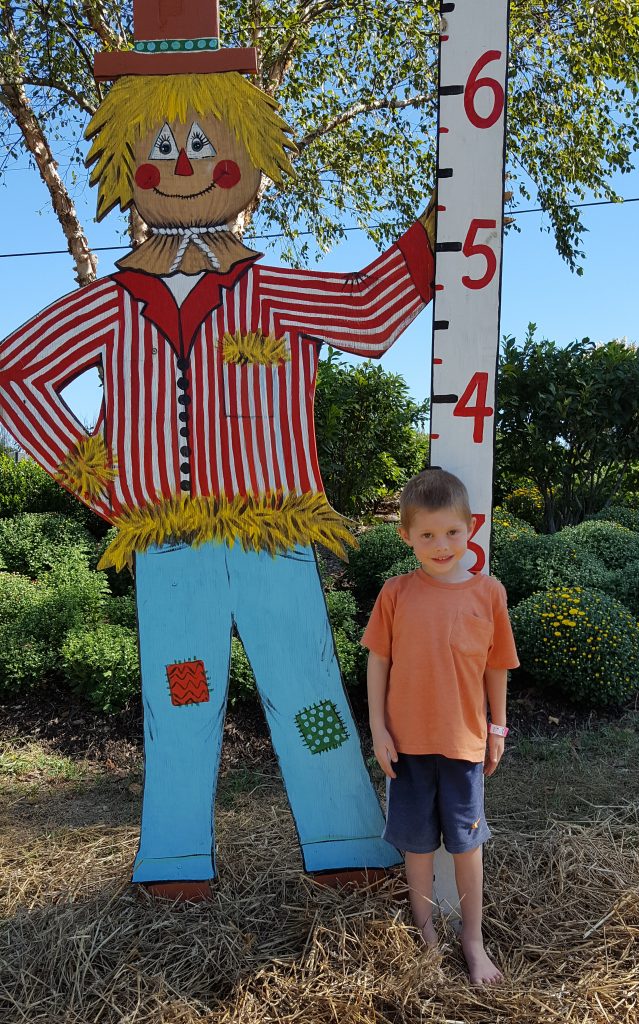 And our second round of Fall fun on October 27:

And now, some Elise artwork

We’ve featured some of the excellent artwork of the Harlan here but now it’s time to start showcasing what Elise can do.  So, without further ado, I present you with the Elise Collection.

We went to a half dozen Halloween themed events this year, and I failed to take any pictures until Halloween night. Here are both kids are shortly before we went trick or treating. Elise, as expected, wasn’t really sure what was going on, but happily went along for the ride on Eric’s shoulders and did lots of waving bye. Harlan really got into it this year, happily going from door to door and saying “trick or treat!” For several earlier events Harlan dressed as an astronaut. You’ll have to take my word for it that he was adorable then too.