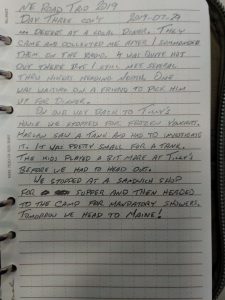 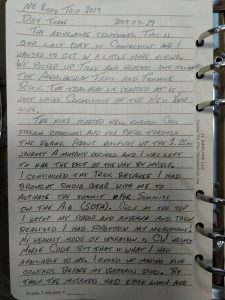 The adventure continues.  This is our last day in Connecticut and I wanted to get in a little more hiking.  We picked up Tilly and headed out towards the Appalachian Trail and Tenmile Rock.  The trail head we started at is just inside Connecticut at the New York state line.

The hike started well enough.  Cool stream crossings and nice paths through the ferns.  About halfway up the 1.25mi journey a mutiny occurred and I was left to hike the rest of the way by myself.  I continued the trek because I had brought radio gear with me to activate the summit for Summits on the Air (SOTA).  Once at the top, I setup  my radio and antenna and then realized I had forgotten my microphone!  My weakest mode of operation is CW using Morse Code but that is what I had available to me.  I ended up making five contacts before my batteries died.  By then the mutineers had eaten lunch and dessert at a local diner.  They came and collected me after I summoned them on the radio.  It was quite hot out there but I still met several thru hikers heading north.  One was waiting on a friend to pick him up for dinner.

On our way back to Tilly’s house we stopped for frozen yogurt.  Harlan saw a tank and had to investigate it.  It was pretty small for a tank.  The kids played a bit more at Tilly’s before we had to head out.

We stopped at a sandwich shop for supper and then headed to the camp for mandatory showers.  Tomorrow we head to Maine!

With the heat wave across the east coast this weekend we decided to make Eric’s radio event trip a family affair. The day started off beautifully. We were camped in a field of wildflowers and there were so many butterflies flitting about and a lovely breeze blowing across the mountaintop. Then the breeze stopped and the sun came up. It was warm… very warm. Harlan enjoyed climbing on some large rocks shaded by a grove of trees (Elise, surprisingly, was much more wary about falling), and we all enjoyed the panoramic views. We did a bit of exploring the area, but did I mention it was really hot? We all decided we would like to go back in slightly cooler weather.

We’ve missed the last couple Appalachian Trail cleanup trips with our friends from Virginia, Jerry and Etta. We made it this time though, and had fun, and cleared our assigned trail section as well. Plus, we got to see (a little too close for Harlan’s comfort) a timber rattlesnake! That was the second day of cleanup. While Eric, Jerry, and Etta weedwhacked the first part of the trail, that Harlan and Elise and I took some clippers and headed down to the end of our section- the Maupin Field Shelter. The kids were amazing little hikers and we enjoyed a break at the creek (basically a trickle) when we reached the end, eating lunch, and chatting with a hiker attempting to filter some water. On the way back we noticed a middle-aged couple who had been hiking stopped in the trail ahead of us. We approached and asked what was going on and then when they pointed we saw the large snake just on one side of the trail. A young couple came up behind us next and in the spirit of youth the young man decided tossing rocks at the snake might encourage it to exit the trail. The snake basically ignored the brief barrage of stones. Then the fella decided to get a long stick and quickly push the snake off the trail. That worked… sorta. The snake was not at all pleased with that turn of events and once moved into the high grass on the other side of the trail continued to rattle angrily. Now we couldn’t see the snake but could hear that it remained quite close so we all decided to hike off the trail and give it a wide berth because walking through poison ivy seemed preferable given the situation. Harlan was a little freaked out though and in shorts at that point. I think he would have calmed down, but the lady hiker we first saw volunteered to carry Elise around so I could carry Harlan. We all made it out safely and he’s quite pleased to be able to tell the story now.

Before we left we enjoyed stopping along Skyline Drive to take in the views. 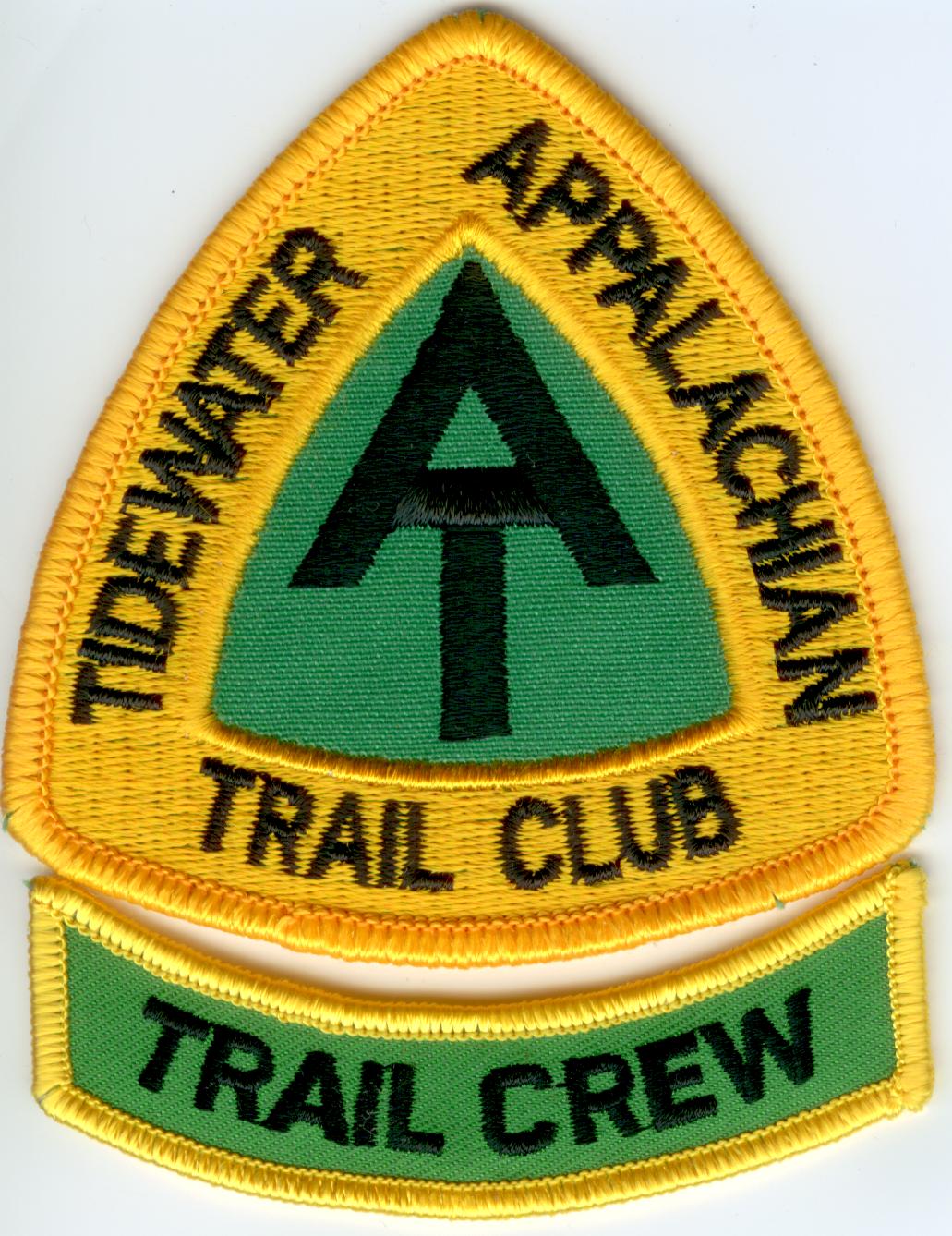 This Fall completes our fourth year of Appalachian Trail maintenance along a two-mile stretch maintained by the Tidewater Appalachian Trail Club (TATC).  We drove down on Friday morning and met up with Jerry and Etta at the parking area near the Blue Ridge Parkway.  The fog was starting to roll in which only makes taking pictures down into the valleys more difficult but I did get a few pictures that were decent.  As rain started to fall we geared up and headed up the trail.

The meadow at the north end of our section had recently been mowed so there really wasn’t much to do there.  The trail leaves the meadow and heads into the woods to climb Meadow Mountain.  I’m not sure how much of a mountain it really is but you do have a decent climb up to the top of the ridge.  This is usually a spot where we end up having to clear brush from the sides of the trail and maybe clip a few branches that are growing too close.  Unfortunately this time we found a tree. 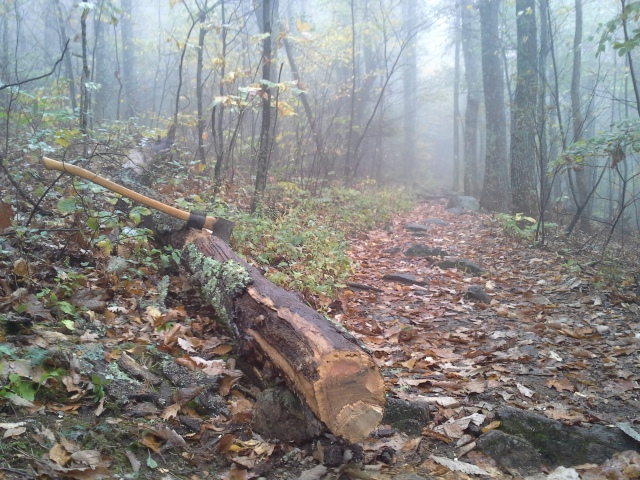 Jerry had brought a small bow saw with him and I started working on the blow-down with that.  It quickly became obvious that this tool wasn’t up to the job.  Luckily Jerry had an axe in his vehicle and after a short hike back he was able to retrieve it.  I started in on the tree and, as rain set in, everyone else started their accent.

It didn’t take too long to clear the trail and I joined everyone on top.  Lots of progress had already been made and I was able to meet everyone just beyond the campsite on the top of the ridge.  Harlan and Amanda were charging ahead doing some survey work while Jerry was doing some trimming work and Etta trimmed back some branches.  The trail looked in pretty good shape so we just hit the known bad spots and turned back. 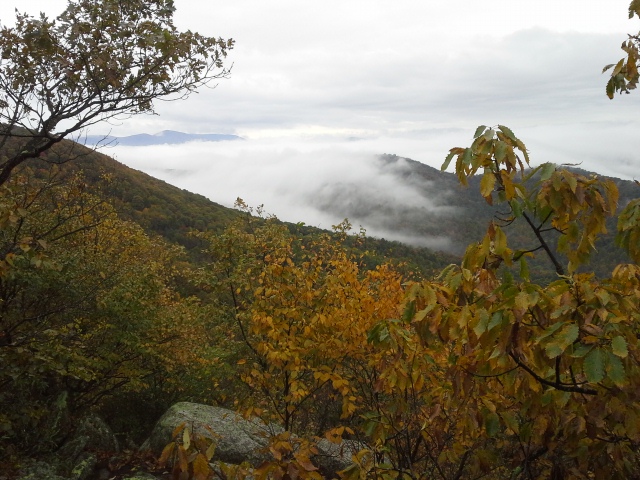 The fog had mostly lifted and the rain had almost stopped by the time we made it off the mountain.  We loaded all of our gear back into our vehicles and drove to our “cabin” for a rest.

On Saturday we made our normal stops at Miller’s Bakery and the Cheese Shop to pick up treats. We also stopped in at the Rocky Gap Outfitters store where Amanda procured a new hat and I found some new boots (well, the same boots as I have now but newer, and waterproof).

We also stopped by the TATC cabin to check on it and see if anyone was around.  There were supposed to be a couple of members there but no one was around.

The hike in was nice even though it was raining.  Harlan got a chance to explore around the cabin and the nearby rocks.  We also explored a neat cave nearby and heard about the construction of the stone building that occurred several decades ago.

We also visited the other side of the club’s ten-mile portion of the AT.  Harlan dutifully ran across the swinging bridge several times and we watched ducks swimming up and down the river and Harlan threw lots of pebbles into the running water.  It’s just a nice and relaxing spot to visit.

After visiting we drove back to our cabin and warmed up/dried off and played games.  I’ve lost count of what games were played or who won them but it was all fun.

Monday morning we headed back towards home.  We stopped to pick up a few Geocaches along the way but the fog was so thick that it didn’t feel safe trying to find hides near the roads.  The fog also thwarted us doing an Earthcache since we couldn’t actually see the mountain to make the necessary identification of the rocks.  Oh well, we’ll put this on our list for next time.

The ride home was uneventful.  Harlan, once again, would like to go back to the cabin and the trail.  We’ll see if we can make that happen a little sooner than last time.

And we’re back!  On Saturday we got up and headed out to the trail where we completed the required maintenance.  The trail really gets overgrown in areas and the meadow is no different.  There were some places where hikers had less than a foot of clearance which is impossible to walk down and not touch the briars, poison ivy, and other plant life that could be harmful.  We widened that to six feet, or more, to allow safe passage.

After the work was complete we returned to the cabin, took showers, and then headed over to Waynesboro to make stops at the bakery and the cheese shop.  Those two places are quickly becoming my favorite places to shop.

Games capped off the day and we retired to bed a bit early exhausted from the day’s adventures.

Sunday started not too early.  We were on the road by 10AM, headed home to complete tasks that needed to be done before the start to a new work week.  All-in-all this was a fun trip although too short.  We should definitely plan a return trip before the snow comes in.

We are in Sherando, Virginia for the weekend helping with some maintenance tasks on the Appalachian Trail.  We came up in the Spring and helped with the post-winter tasks and had a lot of fun doing it.  We camped out last time but this time we are staying in one of several cabins for rent.  We didn’t arrive until around 9P so not much to report so far.  Tomorrow should start the fun!